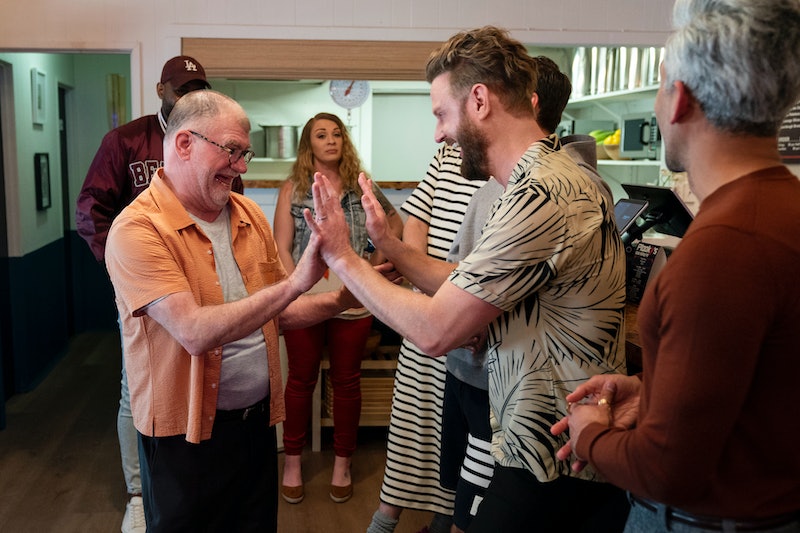 When the Fab 5 met Todd Maddox in Queer Eye Season 6, he was still trying to move forward after losing his wife Jodie, who unexpectedly died of a brain aneurism in 2011. Not only had the the 67-year-old stopped cutting his hair (resulting in a “bald man’s mullet,” as his daughter Kaci called it), he also hadn’t updated or changed anything in their family-owned and operated crawfish restaurant, Plookys Cajun Boiling Pot. Kaci nominated her father hoping that the Fab 5 could help Todd rediscover the joy in life, bring his restaurant into the future, and turn up his look “for a simmer to a boil.”

Throughout the course of filming, Todd did indeed transform from a “surfer Santa” into a “craw-zaddy,” and agreed to start carving out time for some self-care. He’d worried that leaving the Queer Eye team to renovate Plookys without his input would erase Jodie’s memory, as the business had been his late wife’s dream. But he was heartened to see that the redesign included several emotional tributes to Jodie.

Because Todd had planned to be retired by this point in his life, he also agreed to give Kaci more responsibilities and control of the family business, including a possible change to the restaurant’s longstanding gumbo recipe. “I’m ready,” he said on Queer Eye, sharing that he wanted to become “the cruise director” while allowing his daughter to steer the ship. “Life is so brief; enjoy it, embrace it, grab it with both hands.”

Three weeks after the Fab 5 left Todd and Kaci, the father-daughter duo had already hired two new employees. According to online reviews, the updates seem to have impressed customers. “They have redone the inside with new décor etc.. which has changed [the] atmosphere completely,” one TripAdvisor reviewer wrote in August, applauding the friendly staff, fast service, and amazing food. On Yelp, another recent reviewer shared that the restaurant stayed open late so they could enjoy their anniversary dinner, and Todd had made the couple “feel like family.”

Though it’s unclear just how much responsibility Kaci has assumed from her father, she seems to be looking forward to the future. “I’ve never been more proud of you in my entire life,” she wrote in a Dec. 27 Facebook post, tagging Todd. “This is beautiful & we can’t wait to share our Season 6 journey with you all. We are proud to announce Toddles & Plookys are apart of the Queer Eye & Netflix family. Buckle up. It’s going to be a wild ride.”