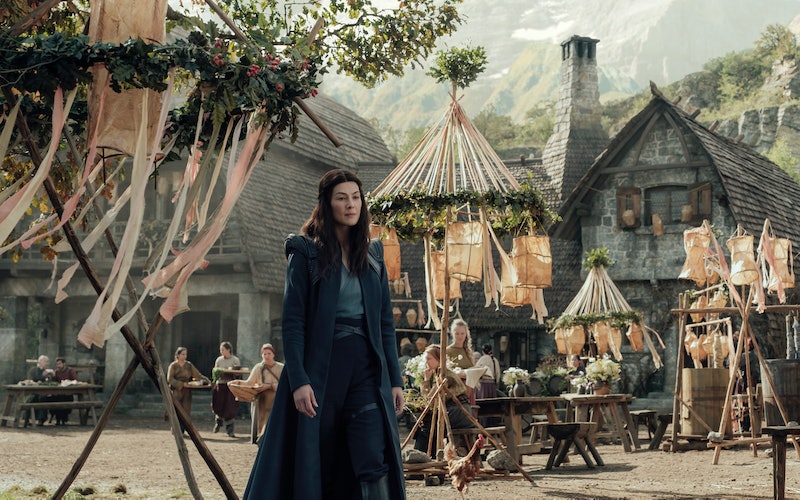 Fans of Amazon’s new fantasy epic The Wheel of Time can rest easy knowing that Moiraine’s (Rosamund Pike) journey will continue. In May, the show was renewed for a second season six months ahead of its Nov. 19 series premiere.

“Getting a second season order before the first season has even premiered is such a vote of confidence in the work we are doing and the [Wheel of Time] property itself, and we couldn’t be happier to be able to continue to live and work in the world Robert Jordan created,” showrunner and executive producer Rafe Judkins said in a statement, per Variety. “This property is one I’ve loved since I was a teenager, and seeing it brought to life with the resources to make it truly worthy of what’s on the page is something I can’t wait for the other fans of the books to see. And Season 2 just keeps expanding the world we built in Season 1.”

Based on Jordan’s popular book series of the same name, The Wheel of Time centers on Moiraine (Rosamund Pike), an immensely powerful member of an organization of women who can use magic. The first season follows her as she embarks on a globe-spanning voyage with five young villagers from the small town of Two Rivers — one of whom she believes to be the reincarnation of a figure called the Dragon who is prophesied to either save or destroy humanity. Season 2 will continue the saga.

The Wheel Of Time Season 2 Cast

When The Wheel of Time does return for its second season, fans are in for a major change. One of the core characters, Mat Cauthon, was recast; he’ll now be played by Dónal Finn instead of Barney Harris. Though Judkins declined to explain the reason for the change, he doesn’t expect it will be too jarring for audiences. “It’s always hard but we’re really lucky that Barney is so great in the first season; I love him in the show,” Judkins told Deadline. “And Dónal Finn, who is playing Mat in Season 2, is amazing. I have seen him up on set doing his scenes now and they’re incredible and they fully capture the character.”

Other new faces have been added for Season 2 as well. Ceara Coveney (The Amazing World of Emma), Natasha O’Keeffe (Peaky Blinders), and Meera Syal (Broadchurch) will all be joining the cast for The Wheel of Time’s sophomore season, according to a Deadline report in October.

Will There Be More Seasons Of The Wheel Of Time Beyond Season 2?

There are 14 novels in the original series, which means The Wheel of Time will likely need several seasons to tell the story to completion. Judkins told Deadline he sees the show running as long as eight seasons. “I always have to approach it as if we’re going to get to tell the whole story that’s in the books. If we don’t approach it that way, then we’d set ourselves up to not stick the landing and these books have such a good ending,” he said. “I really need to set us up to get there if we’re able to. That’s not up to me ultimately. If people watch it and Amazon wants to keep doing more, I’d love to continue to expand this world further.”

This post will be updated with additional plot and cast details as more information on The Wheel of Time Season 2 becomes available.

More like this
A 'Terminal List' Sequel & Spinoff Are Reportedly In The Works
By Kadin Burnett and Grace Wehniainen
Everything To Know About The 'Daisy Jones & The Six' TV Series
By Maxine Harrison and Brad Witter
'Ted Lasso' Season 3 Might Be Its Last
By Zosha Millman and Grace Wehniainen
The 'Freeridge' Cast Shared Their Hopes For A Potential Season 2
By Grace Wehniainen
Get Even More From Bustle — Sign Up For The Newsletter
From hair trends to relationship advice, our daily newsletter has everything you need to sound like a person who’s on TikTok, even if you aren’t.