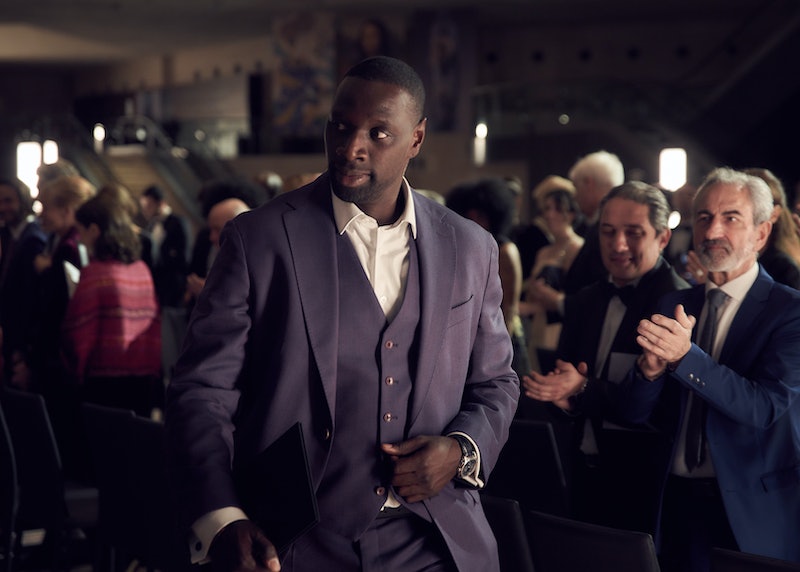 Fortunately for fans of Netflix's Lupin, the wait for additional episodes just got a little bit more bearable — because they’re arriving sooner than you think. Usually, the wait between Netflix seasons is about a year, but the release time for Lupin Part 2 will be much shorter, as the streamer just announced the story would continue this summer. There’s also a new trailer that might help address some of your pressing questions from Part 1.

The series is based on the popular French character Arsène Lupin, a gentleman thief-turned detective created in 1905 by writer Maurice Leblanc. In the Netflix series, Omar Sy plays a version of that character named Assane Diop, who's determined to get revenge on the people who framed his late father for a major crime. Leblanc's writing also becomes a character throughout the series, as Diop is revealed to have been a fan of the Lupin books as a child, and there are references to places and people from the novels all over the Netflix show. As we look ahead toward Assane’s continued scheming, here is everything we know about Lupin Part 2 so far.

What can we expect to see when Assane revisits our screens? According to Netflix, “Assane's quest for revenge against Hubert Pelligrini has torn his family to pieces. With his back to the wall, he now has to think of a new plan, even if it means putting himself in danger.” Considering last season saw the kidnapping of Assane’s son, Raoul, and the murder of his ally, Fabienne, the stakes do seem especially high this time around.

So far, you can expect to see the core cast of Part 1 resume their roles in the upcoming installment. According to Netflix, in addition to Sy in his starring role, Hervé Pierre, Nicole Garcia, and Clotilde Hesme will be returning as the villainous Pellegrinis' camp; Ludivine Sagnier will be back as Assane’s ex, Claire; Antoine Gouy as his friend, Benjamin; and Shirine Boutella and Soufiane Guerrab as the detectives Sofia and Youssef.

Building upon the Part 2 teaser released this March, Netflix’s new trailer for Lupin Part 2 offers a bit more clarity on what Assane’s journey will look like this season. With his son kidnapped and Assane more desperate than ever, the hero must go on the run — the trailer teases that he’s “the most wanted man in France.”

The release date for Lupin Part 2 is June 11 — making the follow-up five episodes a worthy addition to your summer Netflix marathon itinerary. But that might not be all we see from Lupin in the near future. If Parts 1 and 2 of Lupin continue to find an audience, the show could carry on indefinitely, as Leblanc wrote about Lupin's exploits in more than 60 of his short stories and crime novels, which could act as source material. Given that the show continuously receives rave reviews, its future on the streaming platform is looking good. Robert Daniels of RogerEbert.com called it "the first great television show of 2021" and praised its plot twists and engrossing puzzles as reasons the series becomes so addictive to watch. So even if you burned through the first set of episodes quickly, you don’t need to wait too much longer for more.

More like this
Nicola Coughlan Shared A Lady Whistledown Excerpt From ‘Bridgerton’ Season 3
By Grace Wehniainen, Alyssa Lapid and Sam Ramsden
Here's When 'The Crown' Season 5 Will Premiere — And What To Expect
By Bustle Editors
The First Clip From Netflix’s Queen Charlotte ‘Bridgerton’ Prequel
By Bustle Editors
Devi Is Going To Meet A “Smoldering Bad Boy” In ‘Never Have I Ever’ Season 4
By Jack Irvin and Gabrielle Bondi
Get Even More From Bustle — Sign Up For The Newsletter

This article was originally published on Jan. 8, 2021