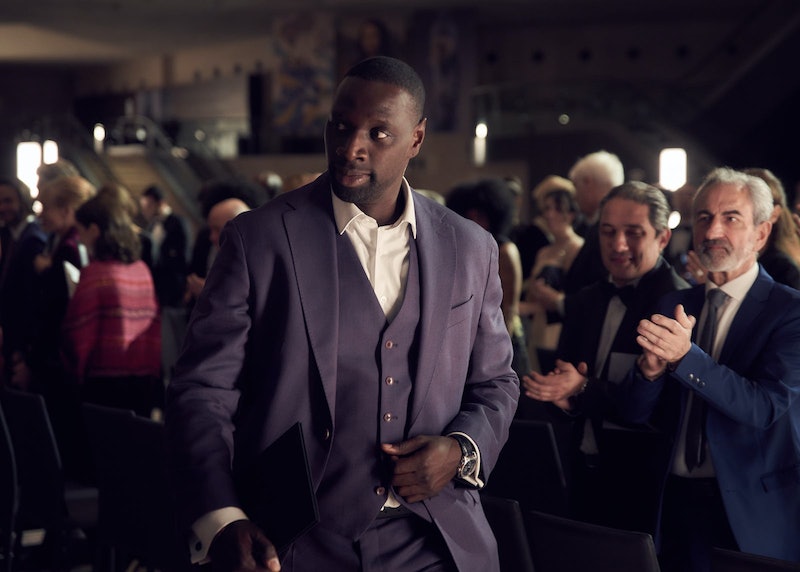 Based on the fictional character of Arsène Lupin, originally created by French writer Maurice Leblanc in the 1900s, Netflix's Lupin reimagines the lead as Assane Diop, a thief-turned-detective who sets out to avenge the death of his father. Part one of the crime-drama consists of five full-length episodes, which recently debuted on the streaming platform, and received rave reviews. After racing through them, many viewers are eager to discover what happens next. So, when does Lupin part two premiere on Netflix UK?

Season one arrived on Netflix on Friday, Jan. 8, but a release date for Lupin season two is yet to be announced. I have reached out to Netflix for confirmation on when fans can expect part two to land, and will update with any news the minute it becomes available. However, if previous Netflix releases such as Unsolved Mysteries offer any indication, the release of Lupin part two could be just a few months away. For now though, we'll just have to wait and see.

Directed by Louis Leterrier, Lupin follows the story of Diop, a janitor at the Louvre museum who attempts to steal Marie Antoinette’s necklace from the Parisian landmark. Diop is motivated by revenge – we learn that his father was murdered 25 years prior, after being falsely accused of committing a crime by a wealthy family.

Lupin has an impressive cast list too. The lead, Diop is played by Jurassic World actor Omar Sy, who is joined by Into the Night's Vincent Londez as Captain Romain Laugier, The Young Pope's Ludivine Sagnier, Regular Lovers' Clotilde Hesme, Families star Nicole Garcia, Hervé Pierre, and Soufiane Guerrab, among others.

Despite only recently launching on Netflix, Lupin is already being hailed as a success story, occupying the top 10 of the UK, U.S., and Netflix World streaming charts, the Express reports.

So, if you haven't already watched it, now's the time to bump Lupin to the top of your 'ones to watch' list. The first five episodes of Lupin are currently available to stream on Netflix UK.