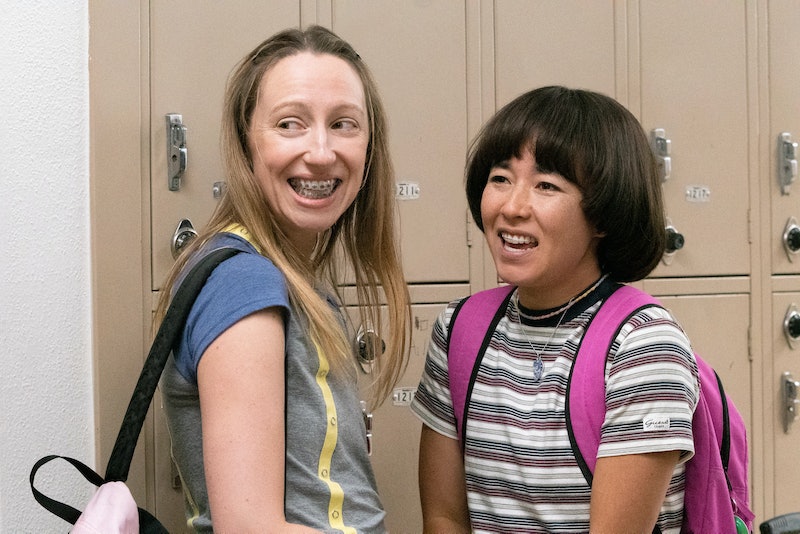 Spoilers ahead for PEN15 Season 2. Nobody has a better handle on the excruciating emotional pain of middle school than PEN15 creators and stars Anna Konkle and Maya Erskine. Returning to portray their fictional 13-year-old selves, Konkle and Erskine tackle teen crushes and heartbreak in PEN15 Season 2. Split into two parts, the first half of the 14-episode season ends on a cliffhanger, with Maya and Anna driving away from an emotional dinner after a school play. Hulu hasn't set a release date for when PEN15 Season 2 Part 2 will premiere, but SlashFilm reports we can expect to see the conclusion sometime in 2021.

The latter half of the season will likely pick up right after Maya and Anna leave the restaurant, both reeling from their own personal heartaches. After attempting to woo Brandt all season — and resorting to some pretty wild antics, like sprinkling his locker with hair and joining the wrestling team — Maya finally moves on with play co-star Gabe. Eventually Gabe admits he doesn't feel any "butterflies" when he's with her, and the two break up in the parking lot, having never even shared a kiss. Meanwhile, Anna watches as her parents' marriage fractures even further, and in the midseason finale, her dad confirms they're getting divorced and she'll have to choose which parent to live with.

It's a darker season that's defined by heartbreak, but Konkle explained at the virtual CTAM press premiere that they always knew a sophomore season would be a messy "gray area," Indiewire reported. Because they didn't know if they were getting a renewal, Season 1 had many of their funny "firsts," like discovering AIM, wearing thongs, and shaving. Season 2 is what happens when the shine of being a teen wears off, and Erskine said they dredged up all of their repressed "pain associated with these stories."

It's Anna's parents' divorce that hits particularly hard in Season 2, as Anna tries to bridge the ever-widening gap between the two adults. “In real life, my parents split the house up for about two years after the divorce,” Konkle said, per Yahoo. “It was really confusing and there was an attachment to them and to us as a family, of course. At the same time, it was very tense and I wanted to share the low feelings that come with that.”

Konkle said that both her and Erskine started to have various "darker feelings" at 13, so Season 2 was a space for them to get "real, honest, and dark" about what it's like to be a unhappy as a tween. While Anna tries to ignore the screaming matches between her parents at home, for example, Maya struggles to be accepted both by her crushes and her peers. (Despite feeling her up at the dance, Brandt acts repulsed by Maya in public, and in one painful scene, a supposed friend mocks Maya's mom's accent.) There are times when Anna and Maya even turn on each other in the hopes of gaining more social currency, which as you'd expect almost always ends in tears and hurt feelings.

This agony extends to the other characters, as well. Sam fails to fit in with the popular crowd, and is too embarrassed to fully admit how much he likes Maya. Later, it's implied that Gabe is grappling with his sexual orientation, which is why he dodges Maya's kiss at the play. Maya and Anna begin to see their own moms as more fallible and human, as both women struggle with how to parent two increasingly rebellious daughters (who both pick up and repeat misogynistic insults in Season 2).

It's painful and awkward pretty much all of the time, but that's exactly the point. As Erskine and Konkle explained to Entertainment Weekly, the entire show is meant to keep you in the "purgatory" that is middle school. “We’re hoping to keep the show [about] Anna and I in 7th grade, forever," Erskine said. "It’s not about these two characters going to high school.” Anna's and Maya's growing pains are unlikely to end any time soon, but perhaps in the second half of Season 2, they'll finally find something to smile about.

This article was originally published on Sep. 17, 2020