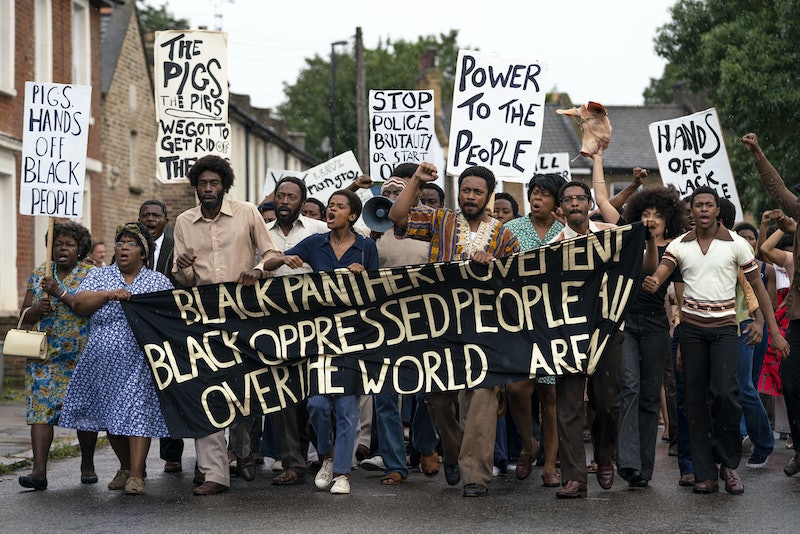 British acting heroes Letitia Wright and John Boyega are both set to star in a brand new BBC series Small Axe, which has been created by the Academy-Award-winning Steve McQueen. But when does Small Axe start, and what can we expect from the show?

The series is thankfully right around the corner, and will debut on BBC One and BBC iPlayer on November 15, 2020. Small Axe and will explore racial injustice faced by London's West Indian community during the '60s,' '70s, and '80s. And if there is anyone we trust to tell the stories of our grandparents and great grandparents, it's McQueen, who has spearheaded the Oscar-winning 12 Years A Slave.

The series will be split into five hour-long episodes: Mangrove, Lovers Rock, Education, Alex Wheatle, and Red, White and Blue. Boyega will stars as real-life Metropolitan Police officer Leroy Logan in Red, White and Blue while Wright stars in Mangrove, which tells the true story of the 1970s Mangrove protes.

The BBC dropped the Mangrove trailer in August and another trailer for Small Axe last month. The short clip showed shots from all five films, with a voice speaking over the top: "These are new types of human beings. They are not demoralised or defeated persons they are leaders but are rooted deep among those they lead. We mustn’t be victims but protagonists of our story."

The series' title holds significance for Caribbean people, as it was inspired by the Jamaican proverb "if you are the big tree, we are the small axe." Meaning that we always have more power than we think we have and that marginal voices can still challenge the more powerful voices.

"I felt these stories needed to be shared. I wanted to re-live, re-evaluate and investigate the journeys that my parents and the first generation of West Indians went on to deliver me here today calling myself a Black British person. What’s important about our stories is that they are local but at the same time global. I think audiences will identify with the trials, tribulations and joy of our characters as well as reflecting on the present environment in which we find ourselves."

Fans of Wright and Boyega will be aware that the two already know each other as they both studied at Identity Drama School together. And Small Axe isn't the only collaboration from the pair as NME reports that they will star in upcoming film Hold Back The Stars, a sci-fi love story.

Small Axe begins on Sunday, Nov. 15 on BBC One and BBC iPlayer.

This article was originally published on June 27, 2019