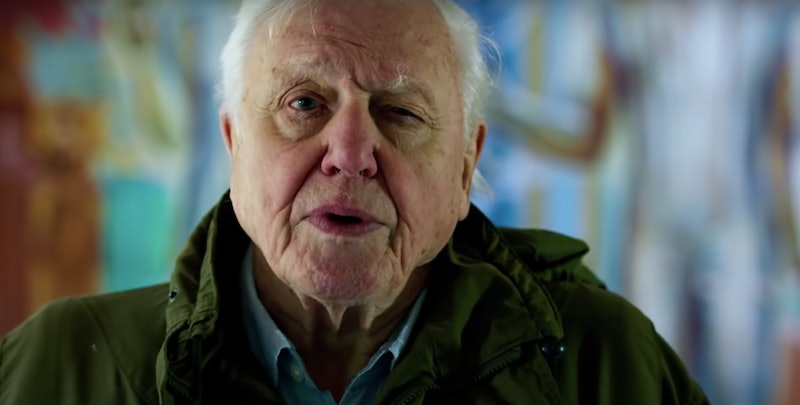 In recent years, David Attenborough has used his platform to raise awareness of humanity's devastating effect on the planet. From extinction to global warming, the documentarian continues to promote the message that something needs to change in order to save the natural world. Attenborough is continuing this theme in an upcoming special for Netflix, but what is A Life On Our Planet about exactly?

Looking back on the "defining moments of his lifetime and the devastating changes he has seen," as Netflix describes, Attenborough captures the destruction of natural habitats and species caused by the immense impact of humanity over the past six decades. "The living world is a unique and spectacular marvel yet the way we humans live on Earth is sending it into a decline," Attenborough narrates in the trailer. "Human beings have overrun the world."

While the film's main focus is on how the natural world is in decline, the Attenborough also offers a hopeful message to future generations imploring they invest in everlasting change that will better the earth as well as the future of humanity as a species. "This film is my witness statement and my vision for the future," he says in the documentary's trailer.

Prior to the coronavirus pandemic, A Life On Our Planet was due to release in cinemas on April 16, premiering at the Royal Albert Hall with a Q&A per Radio Times. After being postponed until "late 2020" in March, the film is set to stream on Netflix on Oct. 4. It will have a limited release in select UK cinemas on Sep. 28, including an additional conversation between Attenborough and Michael Palin.

The documentary will coincide with the release of Attenborough's latest book titled A Life on Our Planet: My Witness Statement & A Vision For The Future.

And, if you're looking for any more info on the film, book, or any of Attenborough's current work, you can now follow him on his new Instagram account. Within the first few hours of joining the platform, Attenborough had already racked up almost half a million followers and had comments welcoming him from stars such as Andy Murray and Joe Wicks. This marks the 93 year old's first foray into Instagram, which he says he hopes to use to talk about the issues facing our planet and the ways in which we can solve them.

More like this
Joey Essex Is Rumoured To Be Dating A 'Love Island' Favourite
By Sam Ramsden
'Love Island' Has Added Yet Another Bombshell To The Villa
By Bustle UK
Twitter Has Renamed Ekin-Su After *That* 'Dancing On Ice' Performance
By Sophie McEvoy
This Pre-'Love Island' Video Of Olivia & Zara Together Changes Everything
By Bustle UK
Get The Very Best Of Bustle/UK
Sign up for Bustle UK's twice-weekly newsletter, featuring the latest must-watch TV, moving personal stories, and expert advice on the hottest viral buys.