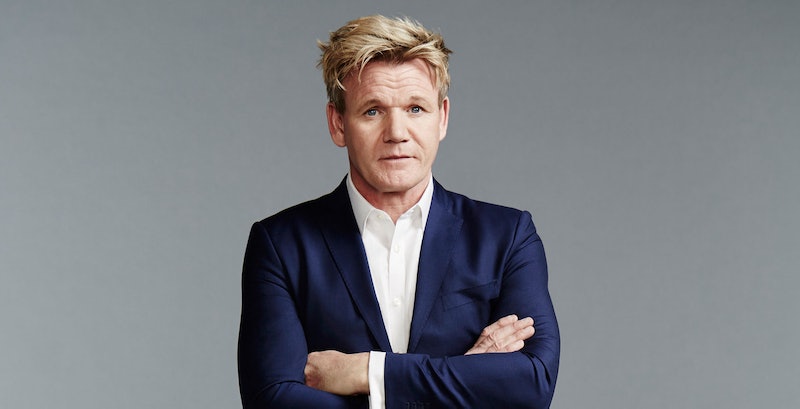 Lockdown has been the perfect opportunity to rewatch the mayhem of Kitchen Nightmares and Hell's Kitchen, thanks in part to Gordon Ramsay’s YouTube channel, which has been uploading full episodes of each series every week. And now it seems he was whetting audiences' appetite, as there's new material on the horizon. The celebrity chef will be back on screens soon with a new show, however, this time it doesn’t involve food. So, when is Gordon Ramsay’s Bank Balance on TV?

In a first for the culinary star, Bank Balance will see Ramsay become a game show host. Yes, there’s no kitchen or cooking competition in sight. Instead, Ramsay says he will guide contestants through “an intense game with so much jeopardy,” via a press statement issued to Bustle. Described by the BBC as a “formidable and unforgettable host,” Ramsay will commentate as contestants attempt to stack up gold bars to try to win large sums of money. It's all about balancing “nerve with knowledge,” as controller of BBC entertainment commissioning, Kate Phillips says.

While the game show was initially announced last September, with filming due to begin in late 2020, it is yet to be given an official air date. If you click through to the application link Ramsay supplied in a tweet about the show, applications now appear to be closed, so that does suggest filming must be imminent, it if hasn’t started already. I’ve reached out to a rep for the show to see if filming went ahead as scheduled, in addition to a potential release date, but have yet to hear back.

While details of the show are being kept tightly under wraps for now, Ramsay gave a sneak peek in a video on his Instagram. It looks like the action will take place in some sort of vault, which would be in line with the bank theme, with a large pyramid-shaped table in the centre. Gold bars are lined up at the back on top of large sums of money, and it seems contestants will have to balance those bars on the pyramid. It's likely that more information will be revealed soon, but from the looks of it, Bank Balance will be an exciting and nerve-wracking watch.

More like this
Twitter Is Saying The Same Thing About Jill Scott Winning 'I’m A Celeb'
By Sophie McEvoy
BBC’s Gladiators Reboot Is Staying Close To The Original ‘90s Phenomenon
By Sophie McEvoy
This 'Strictly' Star Is Rumoured To Be The New 'Big Brother' Host
By El Hunt, Maxine Harrison and Sam Ramsden
A Former 'Strictly' Star Is Set To Make A Sensational Return To The Show
By Bustle UK
Get The Very Best Of Bustle/UK