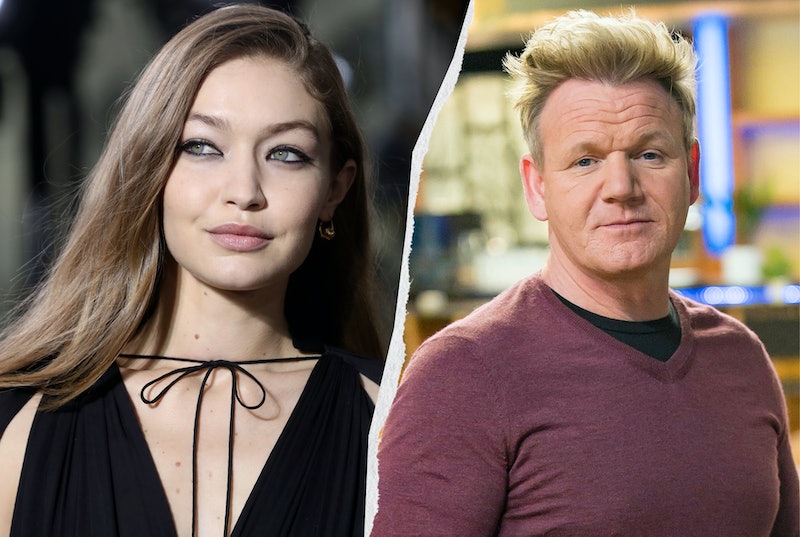 From time to time, a celeb friendship pops up that makes you really stop and go, huh?! You know, like the Martha Stewart/Snoop Dog pairings of the world, the ones that are so so great but also a little perplexing. Like, how did these guys meet? What do they have in common? And what do they talk about when they're together?! The most recent friendship to sit firmly under this category is the one between potty-mouthed chef Gordon Ramsay, and supermodel Gigi Hadid. Ramsay recently revealed he talks to Hadid sometimes, but how are Gordon Ramsay and Gigi Hadid friends exactly?!

Well, it seems the pairs' connection is rooted — unsurprisingly — in food. He told PEOPLE magazine: "Gigi sent me this [pasta] dish a couple of weeks back on Instagram and said, 'Chef, what do you think?'"

It is thought that the pair actually first met when Gigi appeared on the US version of Celebrity MasterChef in 2016, where Gordon was a judge on the show. She actually ended up winning, and it was a burger she made that really impressed the chef most. It seems that since then, the two have kept in touch, becoming friends in the process.

It's a friendship Ramsay really seems to benefit from in his household with his three daughters, Megan, 22, Holly, 20, and Tilly, 19, as he told PEOPLE: "My daughters, they love me. It's not because I'm a f***ing good chef. They love me because I talk to Gigi Hadid. That's the only reason why they want to talk to me."

Tilly has even deemed Gordon cool enough to appear on her TikTok account recently, where the pair regularly make hilarious videos together. The family envy is real!