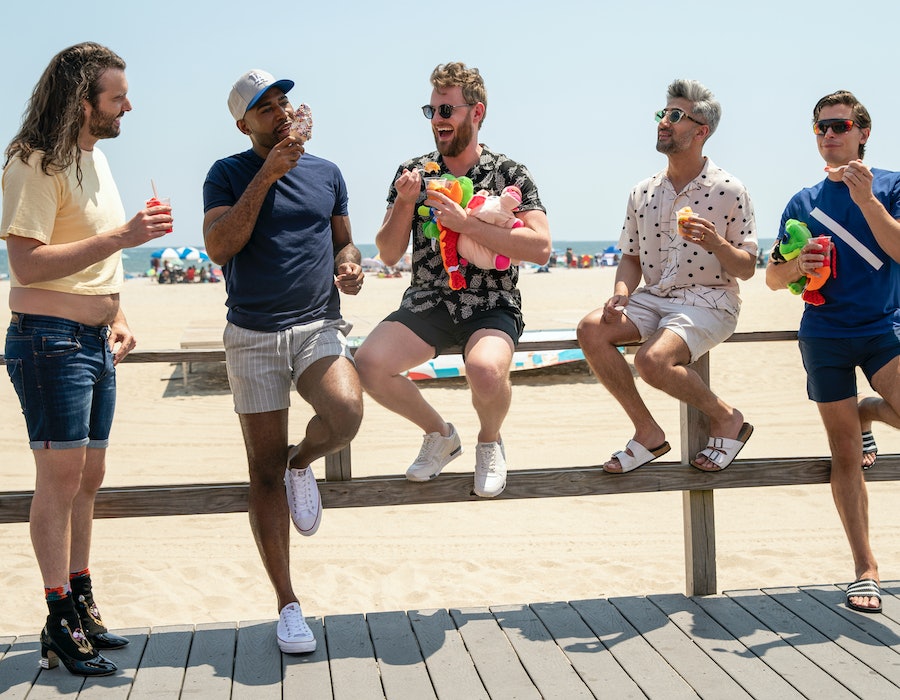 The Fab Five are returning to your Netflix queues on Friday, June 5, and this time, they're in Philadelphia. Don't worry, though: the newest set of episodes were filmed long before social distancing rules went into effect. According to a post on Tan France's Instagram, Queer Eye Season 5 began filming on June 26, 2019.

Casting flyers began to circulate around Philly in April 2019, two months prior filming, after which residents joked on Reddit that local fixtures like Gritty, the gang from It's Always Sunny in Philadelphia, and Benjamin Franklin desperately needed makeovers. Among those who did end up on the season are a young mother, a woman who feels insecure with her height, and a pastor who's gay and trying to establish a more inclusive church.

At 10 episodes, Season 5 is Queer Eye's longest yet, and the show has already been renewed for Season 6. According to the Austin Chronicle, the cast arrived in Austin, Texas to begin production around March 11, when they posed with the El Arroyo sign that is on so many of the reality stars' Instagram accounts. Bobby Berk told Oprah magazine that they were only about five days into filming when the quarantine went into effect.

Afterward, both Berk and Antoni Porowski decided to stay in Austin. Porowski told Eater Austin that he and his boyfriend, Kevin Harrington, initially debated whether or not to return to New York, but decided that the city "didn't need another beating heart taking up resources." Jonathan Van Ness also decided to stay put, telling the New Yorker that he didn't want to travel with his four (four!) cats.

Queer Eye Season 6 likely won't be able to resume filming for another few months, but at least the Fab Five are there holding down the fort until they can get back to work.

More like this
Ozzie’s Coming Out Scene With Kitty On 'That ’90s Show' Has Twitter Sobbing
By Brad Witter
'Love Is Blind: After The Altar' Season 3 Has A Release Date & It's Very Soon
By Grace Wehniainen
Love Is Blind’s Natalie Claims Shayne Signed Up For 'Perfect Match' While They Were “Still Together”
By Brad Witter
Here’s What Happens To Bill & Frank In 'The Last Of Us' Video Game
By Brad Witter
Get Even More From Bustle — Sign Up For The Newsletter
From hair trends to relationship advice, our daily newsletter has everything you need to sound like a person who’s on TikTok, even if you aren’t.