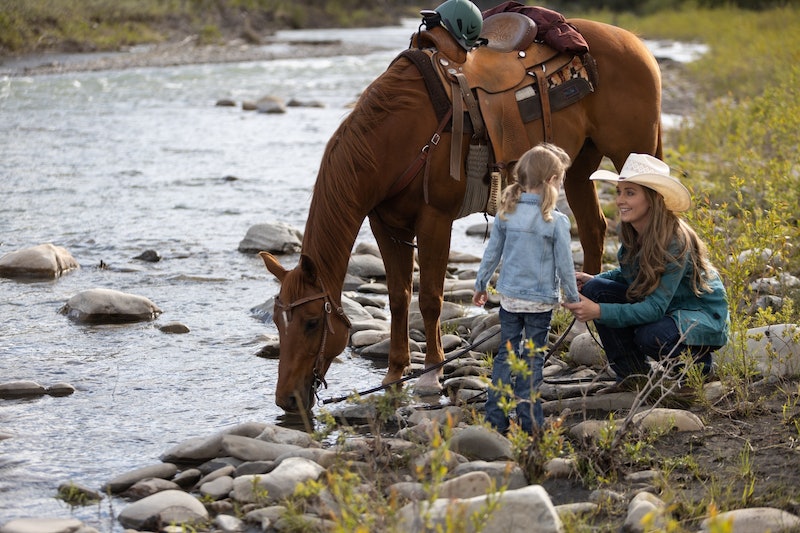 One of the latest series to get the Netflix bump is Heartland, a long-running Canadian television show centered around two sisters — Amy and Samantha Louise “Lou” Fleming — and their lives on and around their family’s Alberta horse ranch. The show is based on a series of novels by Lauren Brooke, all of which were published between 2000 and 2008, and has accumulated a strong fan base in the whopping 15 seasons it’s been on the air. Heartland has been airing on Canada’s CBC network since 2007, and it wrapped up its most recent 10-episode season in late December 2021, leaving many American viewers anxious to start streaming it on Netflix.

Although the main characters of Heartland may be the Fleming sisters, the show is just as much about the journeys of the horses that they care for and train as it is about their own journeys navigating romance, loss, and family drama. In other words, it’s like the Canadian Grey’s Anatomy — if, instead of practicing human medicine, Meredith Grey practiced natural horsemanship and wore jeans.

Ahead of Season 15, CBC teased that the Flemings would have to “put what they learned into practice.” For Amy (Amber Marshall), that means personal and professional changes as she raises her daughter. Meanwhile, Jack (Shaun Johnston), Lisa (Jessica Steen), Lou (Michelle Morgan), and Tim (Chris Potter) “create new drams and fulfill old ones,” all while the family continues to support one another.

Netflix hasn’t yet announced when Heartland Season 15 will be available to stream in the United States. Up until Season 12, Netflix U.S. typically released new seasons of Heartland in the summertime and was about two seasons behind the show as it aired on CBC; however, that changed in 2021. Netflix made both Seasons 12 and 13 of Heartland available to stream on Feb. 1 that year, and then Season 14 arrived on the streaming platform on April 1, 2022. UPtv had a fixed-time exclusive distribution arrangement for past seasons of Heartland that reportedly ended in March 2022, so it’s possible that Season 15 could arrive as early as Summer 2022.

Although it’s not yet clear when the newest Heartland episodes will hit Netflix, for now, U.S. fans still have 14 seasons — 200-something episodes of television — to keep themselves plenty busy!

More like this
Here’s Everything Coming To & Leaving Netflix In February
By Jake Viswanath
Netflix Shut Down 'Bridgerton' S3 Rumours About A “Very Dark” Storyline
By Bustle
Everything To Know About 'Cobra Kai' Season 6
By Brad Witter
The 'Gossip Girl' Reboot Creator Is “Looking For A New Home” To Air A Potential Season 3
By Brad Witter
Get Even More From Bustle — Sign Up For The Newsletter
From hair trends to relationship advice, our daily newsletter has everything you need to sound like a person who’s on TikTok, even if you aren’t.