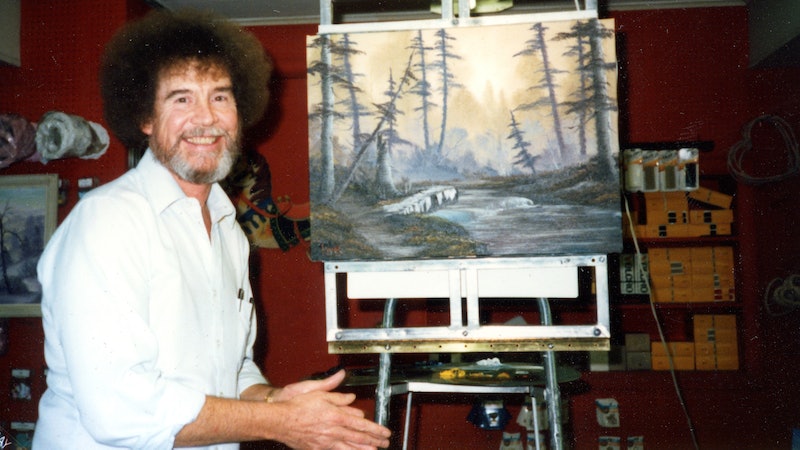 Walt and Annette Kowalski were longtime business partners of the iconic painter Bob Ross, and through their ownership of Bob Ross Inc. (BRI) — which holds rights to Ross’ image and likeness — they’ve continued his legacy. The Kowalskis are also the subject of the Netflix documentary Bob Ross: Happy Accidents, Betrayal & Greed, which chronicles the controversy surrounding Ross’ estate and the myriad of lawsuits surrounding his intellectual property rights since his 1995 death. Walt and Annette have passed on management of BRI to their daughter, Joan Kowalski, and have not personally responded to comment about their relationship and business dealings with Ross. However, Bob Ross’ son, Steve Ross, claims the Kowalskis tried to steal his father’s name and succeeded. So what happened, and where are they now? Here’s everything to know.

The Kowalskis married at a young age, had five children, and lived in Washington, D.C., where Walt worked for the CIA and the couple had various “side hustles,” per The Daily Beast. After the death of their son in a car accident, Annette coped with her depression by watching Bill Alexander, Ross’ predecessor and an oil painter on TV. They traveled to Florida to take a class with Alexander’s protégé, Ross, and realized his immense talent. “I could not believe what I saw,” Annette told Mental Floss in 2015. “People were mesmerized by Bob. I was so enthralled with him that I wasn’t even doing my painting. I was following him around the room and watching him interact with people.”

She asked Ross to come teach some classes in D.C., while the Kowalskis fronted costs and did publicity. Eventually, they turned to TV, and Ross’ show proved a success on PBS. Incorporated in 1985, BRI established Walt, Annette, Bob, and his second wife, Jane, as equal partners, according to The Daily Beast. The Kowalskis brought business acumen; Walt worked on contract negotiations. Annette was also an artist who appeared on the show as a guest.

Annette Kowalski appears in The Joy of Painting with Bob Ross

Annette gave interviews where she would speak about Ross during that time. In 2016, she spoke to NPR, saying Ross was a “tyrant” and clarifying, “Do you really think this company would be as successful as it is, if he didn’t insist that everything be done a certain way?” She clarified that she wasn’t trying to say “he was rude or nasty.” “He just wanted things done his way. He was wonderful,” she added.

When Jane died in 1992, Ross found himself with only a third of the company, per The Daily Beast. Steve and friends of Ross claim that the relationship with the Kowalskis had soured over time (the Netflix documentary also claims that Annette and Ross had an affair that drove a wedge between the Rosses and the Kowalskis). The Kowalskis deny that the relationship was ever contentious or that there was an affair. To NPR, Annette said that toward the end of his life, “Bob was not always full of compliments, but he said to me, ‘Annette, you are the wind beneath my wings.’”

The Kowalski family now owns Bob Ross Inc., and it’s been the source of controversy

As the Netflix documentary and The Daily Beast describe, before his death in 1995, the Kowalskis tried to have Ross sign over to them the rights to his name, likeness, and works. There was a protracted battle as Ross was nearing death, in which Ross attempted to regain control of his intellectual property by specifying in his will that the rights would go to his half-brother, Jimmie, and son, Steve. After Ross’ death (the Kowalskis reportedly did not attend the funeral), BRI pursued a variety of lawsuits and financial claims against the Ross estate, his widow, a PBS writer-producer, and the station that aired Ross’ show, arguing that they owned anything Ross made or used for work. According to Steve, they also warned him against using his father’s name for painting- and art-related business endeavors. (The Daily Beast’s attempts to reach Annette and Walt directly for comment or interview were unsuccessful, and they do not appear in the Netflix documentary.)

In 2018, after Steve sued BRI, alleging that it was illegally licensing Bob’s image, he lost the case. However, he later reached a settlement with the company that allowed him to use his own name for business purposes. In the documentary, he says he has never seen any profits from BRI.

The Kowalski family, which independently operates BRI to this day, have expanded into putting Ross’ shows on streaming platforms and exploring greater branding opportunities. BRI said in an August 2021 statement to Vanity Fair, “If not for the efforts of the remaining founders and their dedication to this mission, Bob’s artistic and cultural relevance — and his expressed desire to become the world’s most beloved painting teacher and friend — would have been lost decades ago with his passing.” Joan maintains that they are protective of the valuable intellectual property of Bob Ross. She told The Daily Beast, “I know that I’m doing exactly — exactly — what was intended by Jane, Bob, Walt, and Annette.”

The Kowalskis’ net worth is unknown

The fact that there has been a Ross resurgence is no secret, but Annette and Walt Kowalski’s net worth is much more difficult to pinpoint. At the time of the artist’s death, his one-third ownership of BRI was worth about $650,000, according to The Daily Beast, meaning the company’s value would have been around $1.95 million (factoring in inflation, that would be closer to $3.49 million today). The current picture, however, is murky. The Washington Post reported in July that the profits of Bob Ross Inc. are unknown while highlighting its successful push into streaming and merchandising in recent years. BRI now has a thriving online presence; the Bob Ross YouTube account has nearly 5 million subscribers as of this writing, and its social media accounts have healthy followings as well (more than 239,000 followers between its Instagram and Twitter accounts). “We’re busy getting Bob into every nook and cranny,” Joan said in an interview, per The Post.

One Bob Ross-centric work BRI presumably won’t be profiting off of is the new Netflix documentary. Walt and Annette did not appear in the documentary, and the preview teases that it can’t show the trailer, seemingly hinting at legal reasons.