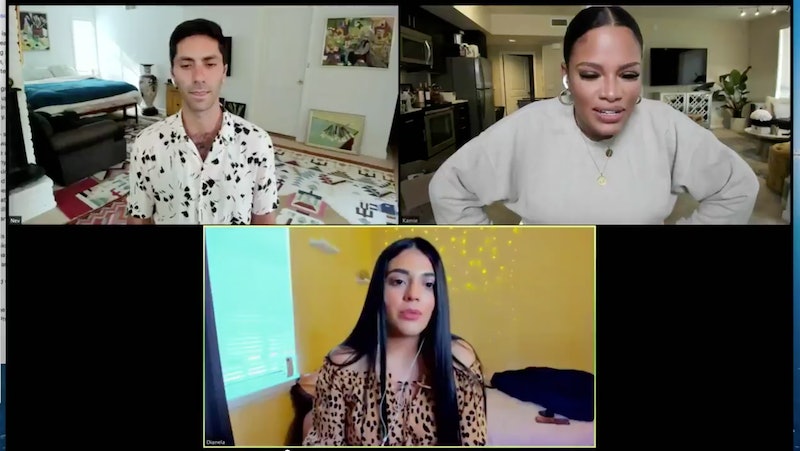 After a one-week hiatus, Kamie and Nev returned to Catfish on Wednesday night to investigate the case of Dianela and José. The two, who are both from Venezuela, met while playing video games online and fell in love over the course of four years. But they never video chatted, and on the multiple occasions Dianela tried to meet José, he ghosted. Even after they both moved to the United States, José refused to meet. What was he hiding?

It turns out that José is actually Rey, who yes, is Venezuelan and did move to the U.S., but when he met Dianela, he used a different photo and name to protect his identity. According to him, it's not safe to show all your cards right away in their home country, and he feared revealing himself could put him in danger. Even after Rey grew to trust Dianela, he struggled to tell her the truth.

Once Rey came clean, he professed his love for Dianela, apologized, and promised to do better. Dianela was hurt, but gave him a second chance. According to the follow-up call Nev and Kamie did with Daniela, Rey didn't follow through and she decided to move on.

The two no longer follow each other on Instagram, though they both appear to be single. On July 31, Dianela uploaded a selfie with the caption, "Now you love her and she doesn't want you" in Spanish. On Sept. 26, Rey shared a photo of himself captioned in Spanish, "That the trap of my soul you won't want to run" alongside a flame emoji.

A few days later, Dianela shared a somber TikTok in which she appeared to be upset. The caption read, "I’ll be back, I’m just not ready yet.. ( I think Imma just switch to girls now.. )." So it looks like she may still be getting over José.

More like this
We’ve Got A Text! Another 'Love Island' Series Is On The Way
By Darshita Goyal
Why Wasn't Teddi At The 'Bachelor In Paradise' Reunion?
By Brad Witter
Miriam Haart & Girlfriend Nathalie May Have Broken Up After 'My Unorthodox Life'
By Brad Witter
Are Kayla and Seb From 'Too Hot To Handle' Still Together?
By Karen Fratti
Get Even More From Bustle — Sign Up For The Newsletter