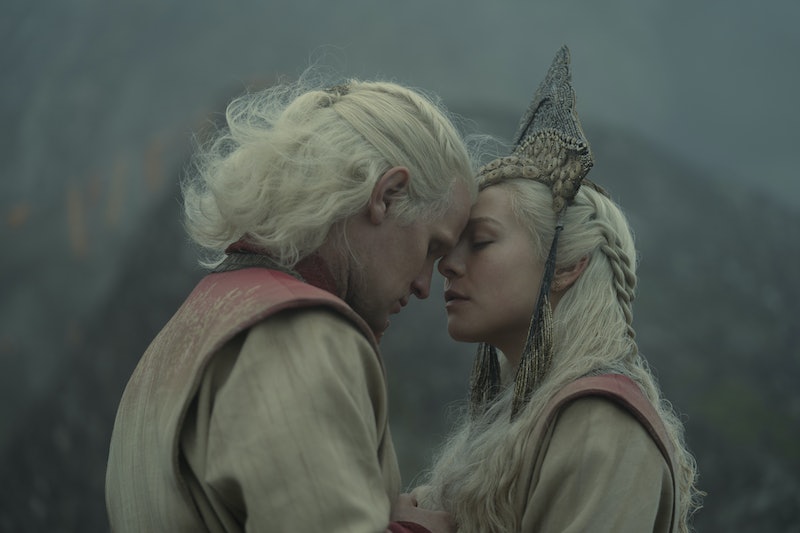 Rhaenyra's (Emma D'Arcy) and Daemon’s (Matt Smith) presences were never more needed than in the latest House of the Dragon episode when the Hightowers made their hasty attempt to get Aegon II (Tom Glynn-Carney) atop the Iron Throne. However, Westeros’ silver-haired power couple was nowhere to be found during the season’s most important episode to date. Their absences — while increasingly frustrating during Otto Hightower’s (Rhys Ifans) power trip — are entirely explicable.

You may remember during the previous episode when the entire royal family convened for what would be their last dinner with King Viserys I (Paddy Considine). The king’s plea to his family to find unity for the good of the realm was warm enough to melt the hearts of Rhaenyra and Alicent (Olivia Cooke), who had been in a years-long quarrel. The former friends ultimately toasted one another, and it appeared that, for once, the Targaryen infighting had been over.

Prince Aemond (Ewan Mitchell) did his best to try and ruin the family’s solidarity by making a crack about the parentage of Rhaenyra’s children. His joke sent the evening into a brief tailspin, and the dinner quickly dissipated. Rhaenyra then informed Alicent that she needed to bring her children home to Dragonstone, but that she would return to be with Alicent during Viserys’ final days.

Episode 8 also provided the most frustrating misunderstanding in Westerosi history. In his final moments, Viserys mentions the prophecy he had talked to Rhaenyra previously, and he tells Alicent that he thinks Aegon should be king. The “Aegon” he’s referring to is not his first-born child with Alicent, but the first-born son of Rhaenyra and Daemon. As far as Viserys was concerned, it was Rhaenyra and Daemon’s child who was the subject of the prophecy. (To his credit, he’s not entirely wrong. The prophetic prince would be named Aegon; it’s just that he — Jon Snow —wouldn’t be born for hundreds of years later.) This misunderstanding matters because Alicent’s misinterpretation causes Otto to expedite Aegon’s coronation with the intention of keeping Rhaenyra and Daemon in Dragonstone and oblivious to the king’s death and Aegon’s ascension.

Why Do Daemon & Rhaenyra Miss Aegon’s Coronation In Fire & Blood?

In the show, Aegon II is more interested in debauchery than he is in ruling the Seven Kingdoms. His book counterpart is far more resentful toward Rhaenyra’s children. He took great offense when Prince Jacaerys Velaryon danced with his wife Princess Helaena Targaryen during a family dinner, but the show’s version of this sequence featured a much more apathetic Aegon.

When Viserys dies in the book, Rhaenyra was still the heir to the Iron Throne. During her father’s death, she was away at Dragonstone tending to her pregnancy. Otto, Alicent, and their supporters hid the news of Viserys’ death until the preparations for Aegon II’s coronation were complete. One of their noted opposers was Lord Lyman Beesbury, a member of Viserys’ council. In the book, as in the show, he’s murdered by Ser Criston Cole for his reluctance to serve Aegon II.

Episode 9 continues to follow the events of Fire & Blood pretty closely. During the preparations for his coronation, no one could find Aegon II. He was eventually found in the revels of Flea Bottom, where he’d spent an evening getting drunk, going to brothels, and watching feral children fight. The Hightowers attempted to hide this truth about Aegon II, claiming that he was found in his chambers with the daughter of a wealthy trader. At first, Aegon II refused to be a part of the scheme to usurp the throne until Ser Criston persuaded him otherwise. In the novel, Criston told Aegon II that, if Rhaenyra were to take the throne, he and his brothers would be executed.

Aegon II’s new council tried to secretly raise support from the great houses, but the king-to-be grew impatient and demanded his coronation be sped up, unlike the House of the Dragon version of the character who resisted the idea of being king until he was crowned. Once Aegon II was declared king in the book, a Kingsguard member, Steffon Darklyn, was able to successfully get word to Rhaenyra, which prompted the princess to rebuke Aegon II’s claim to the throne. She then appointed herself as queen of the realm, which enraged Aegon II. At first, he wanted her and Daemon beheaded, before eventually being persuaded to offer peace terms to his half-sister. Rhaenyra ultimately refused. Thus, the realm was split in two, and the Dance of the Dragons began.

More like this
'GoT' Star Emilia Clarke Says She "Just Can't" Watch 'House Of The Dragon'
By Brad Witter
15 Photos Of 'The Last Of Us' Star Pedro Pascal That Cement His Zaddy Status
By Radhika Menon
Here’s What Happens To Bill & Frank In 'The Last Of Us' Video Game
By Brad Witter
The 'Gossip Girl' Reboot Creator Is “Looking For A New Home” To Air A Potential Season 3
By Brad Witter
Get Even More From Bustle — Sign Up For The Newsletter
From hair trends to relationship advice, our daily newsletter has everything you need to sound like a person who’s on TikTok, even if you aren’t.