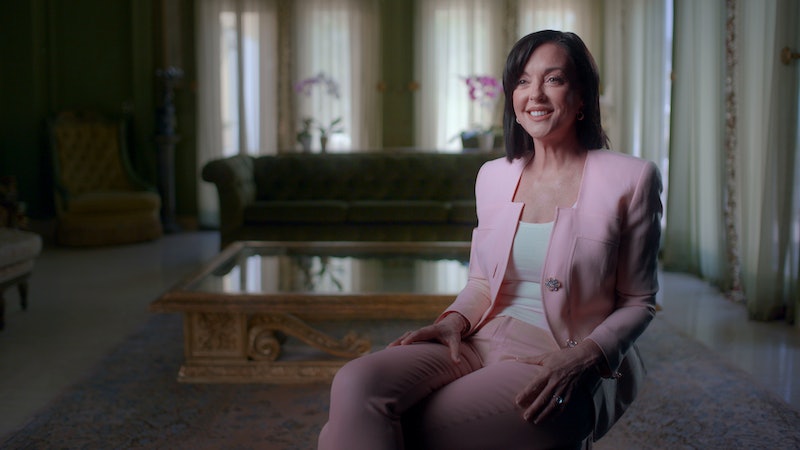 Anyone who followed celebrity gossip in the late aughts will remember the Bling Ring, a group of teenagers who broke into the homes of celebrities like Lindsay Lohan and Orlando Bloom, making off with their clothes, jewelry, and cash. A new Netflix docuseries, The Real Bling Ring: Hollywood Heist, relitigates the burglaries and reexamines the complex social lives of the teenagers involved, including that of Alexis Neiers Haines. Though she was only a minor player in the Bling Ring, Neiers Haines rapidly attained notoriety after being prominently featured in a Vanity Fair article about the crimes and appearing in her own reality show, Pretty Wild, along with her sisters and mother, Andrea Arlington.

Arlington also features prominently in The Real Bling Ring. Viewers only superficially familiar with the story might be surprised by how how much time the docuseries devotes to Arlington, but she was an essential player in the Bling Ring extended universe. She played a central role on Pretty Wild, and was also memorably portrayed by Leslie Mann in Sofia Coppola’s film The Bling Ring, which fictionalized the heists. To fully understand Neiers Haines’ story — and the story of the Bling Ring — it’s crucial to understand Arlington and the role she played in her daughters’ lives.

To learn more about Arlington, read below.

Who is Andrea Arlington?

As Arlington describes in The Real Bling Ring, she began working as a model as a teenager. At only 16, she started modeling lingerie and posing for Playboy. Not long after that, when she was 21, her brother Ben died as a result of his substance abuse disorder, according to her personal website. Around this time, she began booking small acting roles on a sitcoms, where she met Mikel Neiers, who, like Arlington, was struggling with substance misuse. They married and had two daughters, Alexis and Gabrielle, but the marriage ended in the wake of Mikel’s infidelity.

When Alexis and Gabrielle were children, they lived with Arlington, and the family struggled financially due to Arlington being out of work. She later joined the Church of Religious Science, where she was ordained as a minister. “It sounds like a cult, but it’s not,” Alexis assures viewers in an interview for The Real Bling Ring. “It’s about how we can use our thoughts and emotions to create the life we want for ourselves,” Arlington explains. In an oral history of Pretty Wild that appeared in The Cut, Arlington elaborated further on her catchphrase “And so it is,” which she and her daughters invoked frequently on the show, and on Religious Science more broadly: “Basically the definition of ‘amen’ is ‘and so be it.’ It’s a statement of faith and conviction that the word you have spoken is being moved upon by the power of God and that it is done. ‘And so it is’ comes from my spiritual practice, which both my grandmother and my great-grandmother were practicing back in the 1930s and 1940s, and it’s from religious science. It’s not Scientology. It’s just simply a way of being in the world.” (Arlington also, somewhat infamously, encouraged her daughters to create vision boards “about people demonstrating good character, like Angelina Jolie.”)

Though Arlington remains committed to her spiritual practice, she now readily admits that she let her daughters down as a parent in other ways when they were teenagers. “It was supposed to be about a wacky mom, which I am still, but in a good way,” she told The Cut. “I was a disaster back then. I had not been making good choices in my life.” Both Alexis and her foster sister Tess Taylor were struggling with substance abuse disorder at the time, and as Arlington writes on her website, “Instead of contributing to their recovery, I enabled and alienated them. I yelled and screamed, shamed, blamed and threatened. … Like so many parents and family members dealing with this deadly disease, I was crazy and ended up pushing them and everyone else in my life away when all I really wanted … was to hold them close and wake them from the nightmare.”

In The Real Bling Ring, Alexis alleges that Arlington encouraged both her and Taylor to pursue pin-up modeling when they were only 16. Though Arlington claims it was their idea, Gabrielle adds that Arlington “really pushed it.” Taylor would subsequently pursue posing for Playboy, as Arlington had done as a teenager.

Later, the family wound up landing an E! reality show, Pretty Wild, produced by Dan Levy. But the interference of the Bling Ring scandal soon shut down the production, and the show only aired nine episodes.

Where is Andrea Arlington now?

Arlington attained a Doctorate in Consciousness Studies at the Emerson Theological Institute and currently works as a Certified Professional ICF (International Coaching Federation) Life Coach, primarily with families struggling with substance abuse recovery. “In all of my life, nothing has been more devastating than losing my brother and then having a children addicted to heroin and not knowing how to help them get well,” she writes on her website. “Perhaps like me, you have NO CLUE how to help your loved one, how to get your life back, how to find your inner peace, and breathe easy again. But you can, even if they are still using.” She also works as a non-denominational minister.

She has also written a book, Revelations of a Bad Mom: A Journey of Loving Your Child into Recovery and Healing Your Family, which is forthcoming.