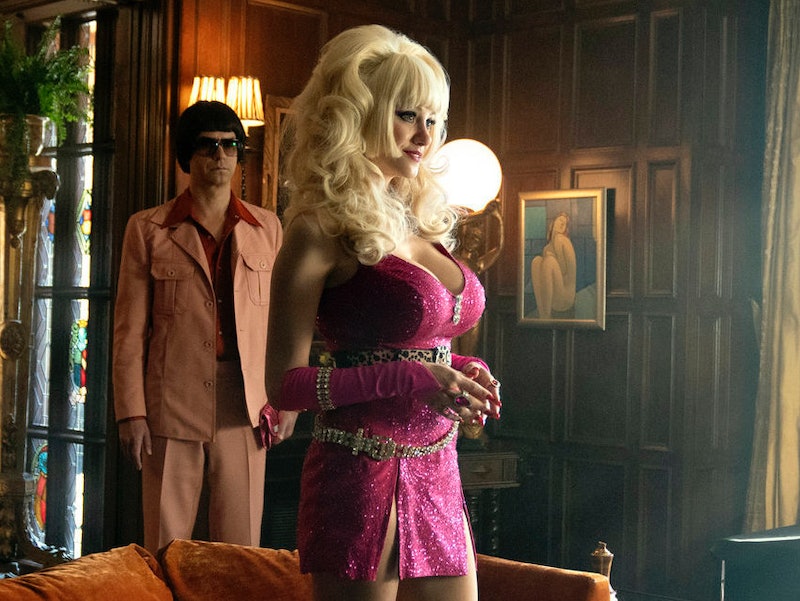 Isabella Vosmikova/Peacock
By Gretchen Smail
May 19, 2022

Before social media influencers, Paris Hilton, and Kim Kardashian, there was mononymous Los Angeles icon Angelyne, who mastered the art of being famous for, well, being famous. In the 1980s, she became known all over town thanks to a series of billboards featuring her big, platinum blonde hair and bright pink Corvette. But her true identity was shrouded in mystery. Peacock’s new five-episode limited series, Angelyne, dramatizes her real life through a mix of fact and fiction. “I’m a Rorschach test in pink. An innocent little doll. Or a whore. Or a porn star,” says the titular character, played by Emmy Rossum. “People see what they see.”

Showrunner Allison Miller said in a press release that the show is not really “the true story,” but rather a “homage” to the real Angelyne, who came to symbolize the glamour of the city. “It’s not a straightforward biopic. It’s a story inspired by everything Angelyne represents. ... It’s a story about Los Angeles and everything the city means to people who move here.”

Who was Angelyne, and why was she on all those billboards? At the time, many Angelenos had no idea, but in 2017, The Hollywood Reporter’s Gary Baum wrote an article revealing who Angelyne really was, thanks to an interview with a “hobbyist genealogist” who had used a “global network of public databases” to identify her. (The Hollywood Reporter independently confirmed his findings.) Her real name was Renee Tami Goldberg, and she was born in Poland on Oct. 2, 1950.

Goldberg and her family moved to the United States in 1959. Her parents, both Polish Jews, had survived World War II concentration camps, but had lost more than 40 relatives. After liberation, they were sent to a displaced persons camp in Germany, and then repatriated to their home country. But Poland was still unwelcoming to Jews after the war, so they moved first to Israel, and then to New York.

Goldberg’s mother died of cancer when she was 14, and her father remarried another Holocaust survivor. The new family moved to Panorama City in the San Fernando Valley, where she attended Monroe Senior High School in the ’60s. From here, the paper trail thins out, but records indicate that Goldberg briefly married a Hollywood executive, Michael Strauss. The couple divorced in 1969. Strauss said she was “unique, beautiful, [and] smart,” and that she’d fled her home because her father was “controlling and cruel,” having been traumatized by World War II.

Strauss and Goldberg lost contact after the divorce, but he says they met they again in the mid-’70s. By then, she was Angelyne. “I wasn’t there when she made the transition. All of a sudden, big boobs, blond hair, this voice ... it didn’t compute with who I’d known she was,” Strauss told The Hollywood Reporter. He didn’t buy her new persona — an orphan from Kentucky — saying she “couldn’t fully sell” this “crazy, out-of-this-world character.”

Goldberg had invested in plastic surgery, performed in a band, and sold cameos of her billboards to studios, but ultimately she never made it big in the industry. Like many dreamers in Hollywood, Baum wrote, her entertainment career “never panned out quite as intended.”

Today, Angelyne is around 71 years old. The Hollywood Reporter story noted that she’d sold her Malibu condo in 2010, and as of 2017, lived in the Ventura County area of Thousand Oaks.

She can still be spotted around LA in her pink convertible, and has plenty of fans who view her as a Hollywood staple. There’s an @Angelyne Sightings Twitter account — “I just saw Angelyne, which is one day of very good luck?” one person joked — and she happily takes photos with fans and shares wisdom on her Twitter account. In December she posted, “Anyone that follows me becomes Hollywood royalty immediately.”

Per Variety, Goldberg was originally set to appear in Angelyne but opted out for undisclosed reasons. She was not part of the show’s production, but Rossum says she granted the series rights to her life, and to all the trademarks, art, and punk-pop music she’d been involved in. She also gave Rossum her blessing. “She told me that I should tell the story that I wanted to tell — that she considers herself to be an icon and that she serves to speak to whatever the individual sees in her,” Rossum told Variety. “She said she did what she felt she was inside and that’s how it came out, and we wanted to honor the legacy that she has in all of her pink glamour. I hope that the show is ultimately a love letter to that fun.”

More like this
Jill Zarin Said Her 2011 RHONY Firing “Felt Like A Death”
By Brad Witter
Taylor Armstrong Would “Definitely” Return To RHOBH After Her Season 3 Exit
By Brad Witter
Julie Andrews Revealed A Surprising Behind-The-Scenes 'Bridgerton' Detail
By Grace Wehniainen
Who Is 'Umbrella Academy' Star Elliot Page Dating After His Divorce?
By Jake Viswanath
Get Even More From Bustle — Sign Up For The Newsletter