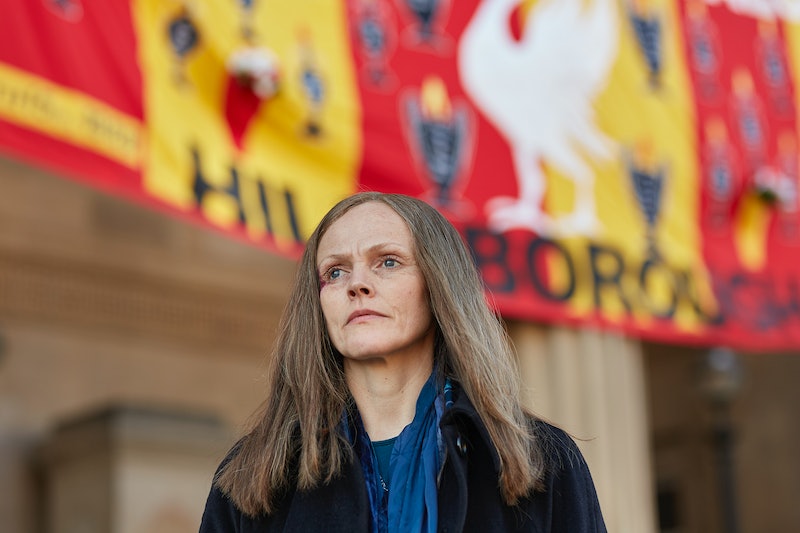 Starring Maxine Peake, ITV’s upcoming drama Anne will tell the story of Anne Williams, a woman who spent much of her life campaigning to find the truth about her son’s death and the deaths of the other 97 Liverpool FC fans who were killed in the Hillsborough disaster, one of Britain’s most infamous tragedies. The drama series is set to document the harrowing events that took place during the FA Cup semi-final between Liverpool and Nottingham Forest at Hillsborough Stadium in Sheffield on April 15, 1989, but where is ITV’s Anne filmed?

Staying true to the story, ITV’s Anne was shot on location around Liverpool where Williams is hailed as a local hero, and the impact of the tragedy is still felt. The mother of three was from Formby, a coastal town just north of Liverpool; a mural honouring her work was recently created in Anfield — the location of the famed football stadium.

More than 32 years after the tragedy, Williams’ tireless campaign for justice is to be further remembered in Liverpool and throughout the UK with ITV’s dramatisation.

As ITV writes, Williams had refused to accept the coroner’s original verdict of accidental death and campaigned to get to the truth for over 20 years, seeking out medical opinions, speaking to witnesses, and lobbying ministers for new inquests. Williams sadly passed in 2013 shortly after the original inquest verdicts were quashed.

Now, with the approval of Williams’ family and those affected by the tragedy, ITV’s Hillsborough drama will chart Williams’ enduring efforts for justice.

Ahead of the series’ release (January 2, 2022), critically-acclaimed actor Maxine Peake has been praised for “successfully capturing Hillsborough campaigner's spirit”.

Steve Kelly, the brother of a man who was killed in the Hillsborough disaster, said to the BBC that Peake’s likeliness was uncanny, saying, “It was like Anne was there — I got very emotional and Maxine came over to see if I was OK."

Peake, who is from Westhoughton in Greater Manchester, has spoken of the “huge responsibility” of playing the role for everyone in Merseyside.

“Anne Williams was an extraordinary woman who spent half her life campaigning for the truth of her son’s death and the other 97 victims who were unlawfully killed at Hillsborough. Anne and her family’s story really is inspirational,” she said in a statement to ITV.

She added: “She was a magnificent role model. Her fearlessness and drive to take on the British Establishment is mind-blowing. I hope we can go some way to bringing the story of Anne, the families, victims and survivors of Hillsborough to an even wider audience.”

More like this
ITV's 'Maternal' Was Inspired By A Very Simple – & Unanswerable – Question
By Maxine Harrison
This First Look At 'The Gold' Shows Jack Lowden In A Whole New Light
By El Hunt and Sam Ramsden
Twitter Is Burning As Phoebe Dynevor Reveals Daphne’s 'Bridgerton' Exit
By Sophie McEvoy
Helena Bonham Carter Doesn't Think 'The Crown' “Should Carry On"
By Sam Ramsden
Get The Very Best Of Bustle/UK
Sign up for Bustle UK's twice-weekly newsletter, featuring the latest must-watch TV, moving personal stories, and expert advice on the hottest viral buys.