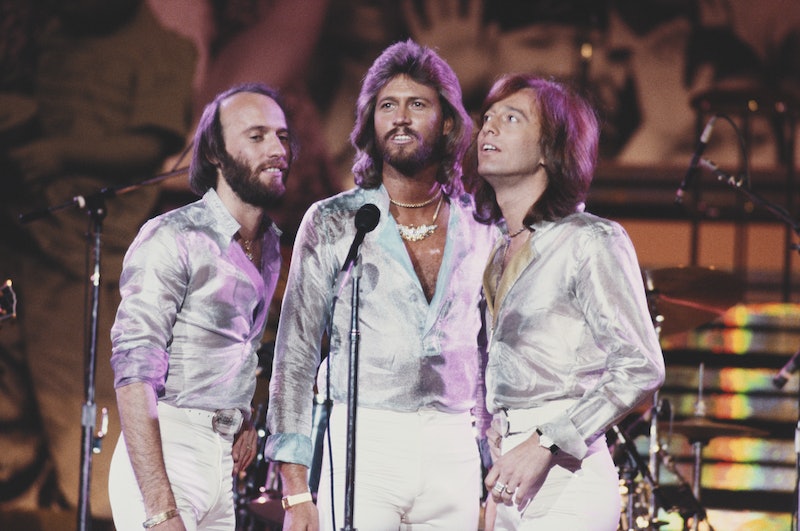 Chances are when you think of disco music, you think of the Bee Gees. The three-part musical group, made up of brothers Robin, Maurice, and Barry Gibb, defined the genre by becoming one of the most successful acts of the 1970s. With hits like "Stayin' Alive," "Night Fever," and "How Deep Is Your Love," listening to the Bee Gees instantly evokes visions of a bygone era. Now, HBO is bringing the Bee Gees back into the zeitgeist with the new documentary The Bee Gees: How Can You Mend a Broken Heart. The film shows where Barry Gibb is now by catching up with the only surviving member of the band, and it's clear that the eldest Gibb brother isn't done making unbelievably catchy music yet.

According to the doc, the three Gibb brothers first began making music together when they were kids, performing on Australian TV when Barry was 14 and his twin brothers were just 10. They eventually became a hit pop group in the late 1960s on the back of ballads like "To Love Somebody," but inner turmoil led to a 1969 breakup. As the doc details, the group reformed the following year but struggled to find an audience throughout the first half of the decade. By 1975, the Bee Gees found a new home in Miami and a new sound in disco, and with it, a career resurgence that culminated in their soundtrack album to the 1977 film Saturday Night Fever. The album ranks as the 20th best-selling of all time, according to Business Insider, and it catapulted the group to absolute superstardom. Though the band continued to produce hits in the '80s, the rapid decline of disco and splintering interests among its members ultimately meant that the Bee Gees moment in the sun had by the end of the Me Decade.

Following the 2003 death of Maurice Gibb and the 2012 death of Robin Gibb, Barry Gibb is now the sole surviving member of the Bee Gees. And really, little in the 74-year-old's life has changed since his time in the band. He still lives in the Miami mansion that he moved to in 1974, according to a recently published interview with The Guardian. He is still married to his wife Linda Gray, whom he wed in 1970. And he is still writing and performing music. On Jan. 8, 2021, Gibb will release his latest studio album, Greenfields, his first since 2016's In the Now. The album is a country record featuring Bee Gees songs rearranged and recorded with a number of notable artists of the genre, including Dolly Parton, Keith Urban, and Little Big Town.

The Bee Gees may be no more, but thanks to Barry Gibb, their memory lives on through the music.

More like this
'Rap Sh!t' Season 2 Is Officially Happening & Will Include "More Seducing & Scheming"
By Brad Witter and Grace Wehniainen
At 14, Myha'la Herrold Was Singing In Her School’s Christian Rock Band
By Samantha Leach
Ramin Djawadi Is Living Out His Dreams
By Rebecca Long
Taylor Swift Wants To Direct A Movie Next — But You Might Have To Wait
By Radhika Menon
Get Even More From Bustle — Sign Up For The Newsletter