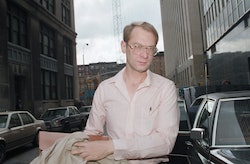 Netflix's Trial by Media chronicles the case of Bernhard Goetz, who shot and wounded four young black men he claimed were about to rob him on the subway in 1984. He was ultimately cleared of attempted murder and served less than a year in jail for illegal firearms possession; today, Goetz is still living in New York City. But over 30 years later, Goetz's case remains sadly resonant: it led to a nationwide debate about race, crime, and the limits of self-defense.

Goetz, who was labeled an "average loner" by his attorney, was once mugged in 1981 while transporting electrical equipment. This prompted him to buy the firearm that he later used in the subway shooting. When Darrell Cabey, James Ramseur, Troy Canty, and Barry Allen boarded the same train Goetz was on in 1984, Goetz claimed they boxed him in and demanded $5. (In court, Canty said they did ask for $5, but they did not threaten Goetz.) Goetz immediately rose from his seat and shot all four teens, paralyzing Cabey from the waist down. Goetz initially ran from the scene of the crime, but turned himself in eight days later.

During the criminal trial, Goetz famously admitted that he wanted to kill the teens. "I wanted to maim those guys. I wanted to make them suffer in every way I could…. If I had more bullets, I would have shot them all again and again. My problem was I ran out of bullets," he said. Despite this damning confession, the predominantly white jury found that Goetz had acted in self defense and was not guilty of attempted murder. Goetz served 250 days in prison. (Cabey's family successfully sued Goetz in 1996 and won $43 million, but per Newsweek, it's unclear how much of that he was actually paid.)

Goetz's trial was a lightning rod for numerous issues plaguing the city, both social and political. According to Time magazine, 1980s New York was characterized by crime paranoia. Between 1965 and 1984, the city's violent crime rate had nearly tripled due to the ongoing economic crisis and the cocaine epidemic. When Goetz's trial began, many people saw him as a hero fed up with the ever-increasing crime wave. "Ride with Bernie — he Goetz 'em!" bumper stickers were sold all around NYC. According to a 1985 New York Times poll, 52% of residents were "generally supportive of Mr. Goetz's actions." Even Joan Rivers reportedly sent Goetz a telegram of "love and kisses" after the incident.

Since then, Goetz has capitalized on his contentious celebrity status. He unsuccessfully ran for mayor in 2001, and has appeared on VH1's Where Are They Now, Aftermath with William Shatner, and The Howard Stern Radio Show. According to Newsweek, he's also become a vegetarian activist and spends his time nursing injured squirrels in New York. In 2008, he was spotted at an animal rights parade called Veggie Pride. In 2013, Goetz was arrested for attempting to sell $30 worth of marijuana to an officer, but was released shortly afterward.

Lately, however, Goetz seems to be keeping a low profile. In response to a 2019 Insider Edition story, he simply emailed back that he is "not doing any interviews at this time."