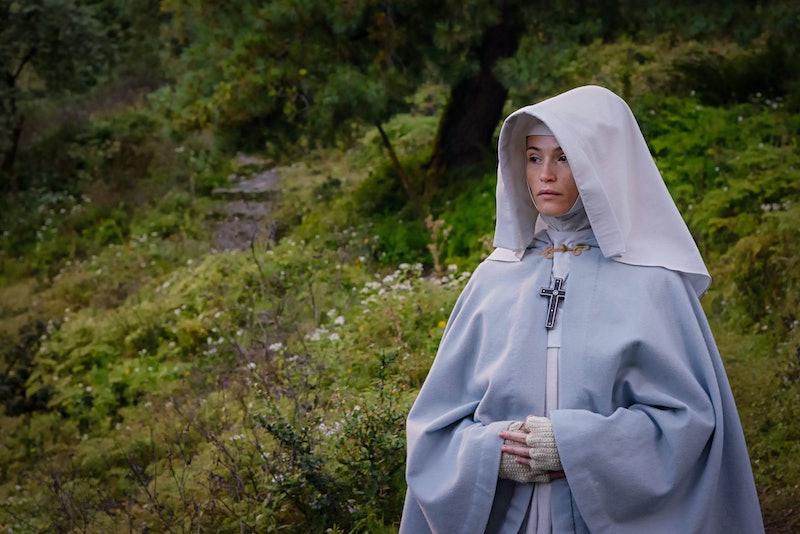 Set in the fictional palace of Mopu in the Himalayan mountains, Black Narcissus sees Gemma Arterton as Sister Clodagh, a nun sent to establish a school and hospital on an isolated mountain with the rest of her missionaries. But where is Black Narcissus filmed? Did the cast and crew film on location in the remote Asian mountains, or did they recreate the setting closer to home?

Black Narcissus started shooting in October 2019, and filming mainly took place at Pinewood Studios in Buckinghamshire for the interior scenes. “It’s incredibly difficult to get any stage space for anything at Pinewood,” executive producer Andrew Macdonald told iNews, who is also the grandson of the original 1946 film’s writer Emeric Pressburger. “But when the studio heard we were making it, they said we couldn’t do it anywhere else. They’re incredibly proud of the continuity,” as the 1946 version was also filmed at Pinewood.

The cast and crew also spent three weeks in the mountains of Nepal to truly capture the setting of Black Narcissus. “It took us four flights and a week to get there,” Gemma Arterton, who plays series’ lead Sister Clodagh, told iNews. “We were in the middle of nowhere in the Himalayan mountains; it was really a special bonding experience.”

Filming took place in Jomsom to be precise, a municipality in Nepal which is home to the seventh tallest mountain in the world, Mt. Dhaulagiri. Trekking is the main form of tourism here, with visitors drawn by its “diverse landscape and culture” which gives a “marvellous insight into the way of life of Napali people of various ethnic groups,” tourist site Visit Nepal writes. The famous pilgrimage site Muktinath is also nearby, which attracts thousands of Buddhists and Hindus from across the country.

This differs substantially from the 1946 film, which was filmed solely at Pinewood Studios. To recreate the Himalayan surroundings, art director Alfred Junge provided what would become Oscar-winning painted backdrops as well as filming exterior shots at Leonardslee Gardens in West Sussex.