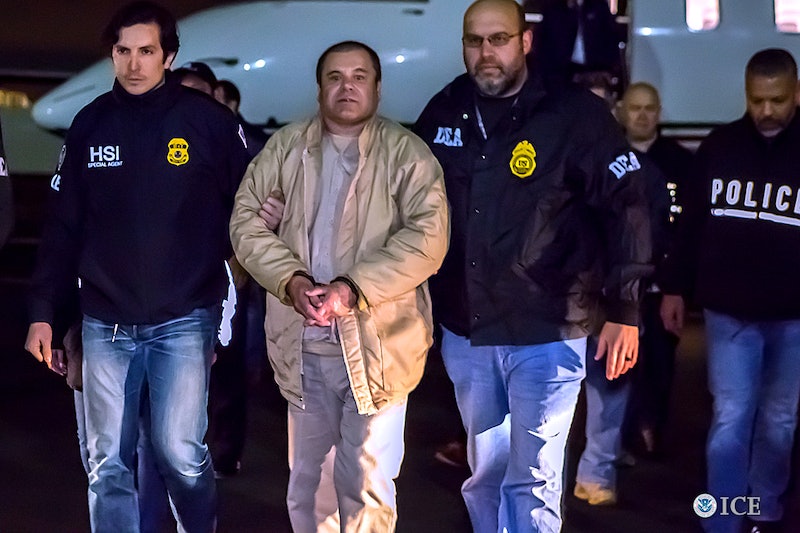 Picking up in the aftermath of Miguel Ángel Félix Gallard’s 1989 arrest, Narcos: Mexico’s third and final season depicts the violence that ensued as his Guadalajara cartel splintered into warring factions. One group that rose to prominence was the Sinaloa cartel, which was led for years by the now infamous Joaquin Archivaldo Guzman Loera, aka “El Chapo.” Today, El Chapo is serving a life sentence plus 30 years at the United States Penitentiary Administrative Maximum in Florence, Colorado.

Known as one of the most notorious drug traffickers in the world, El Chapo looms large in America and Mexico’s war on drugs. Per the BBC, he began calling himself “El Chapo” after cultivating a marijuana plantation with his cousins at just 15 years old. From the mid-’80s until his initial arrest in Mexico in 1993, he worked as a mid-level operative for the Sinaloa cartel, where he was initially dubbed “El Rapido” for how quickly he transported drugs across the Mexico-United States border. He spent eight years in a Mexican high security prison before escaping in 2001 — likely with the help of corrupt guards – after which he formed an alliance with Ismael Zambada Garcia to take over Sinaloa.

According to the U.S. Justice Department, El Chapo thrived as the leader of the cartel. He developed a vast network of bribed government officials and law enforcement officers, utilized tunnels to transport drugs across the border, and tortured and murdered rival gang members. Per the New York Times, it’s estimated that he smuggled more than $12 billion worth of drugs during his tenure, fueling decades of conflict. El Chapo was eventually arrested again in 2014 by Mexican authorities, but he escaped a year later using a tunnel that his associates dug under the prison.

Frustrated with his numerous escapes, the United States had Guzman extradited from Mexico in 2017 and charged him in six separate indictments. "He's going to face justice. He's not going to get his own prison," DEA Administrator Jack Riley told ABC News. "He's not going to dig a tunnel out. He's not going to bribe the officials."

In February 2019, Narcos: Mexico showrunner Eric Newman attended El Chapo’s trial along with actor Alejandro Edda, who plays El Chapo on the show. After Guzman’s lawyers told him that Edda was there, he turned around, smiled, and waved. “I didn’t smile back. I was just paying respect to him,” Edda told The New York Times. “I was shocked in a way. He has a very intense look. His eyes say a lot. He’s a bit intimidating.”

In July 2019, El Chapo was sentenced to life in prison on charges of drug trafficking, murder, and money laundering. On Oct. 25, 2021, El Chapo’s lawyer appealed to overturn his conviction, citing juror misconduct and harsh jail conditions that he described as a “modern dungeon.” The 2nd U.S. Circuit Court of Appeals in Manhattan “appeared receptive to the argument” that jurors may have improperly followed media coverage of the case, but it’s unclear if the appeal will actually move forward.

In the meantime, El Chapo remains in prison, and it looks like his wife, Emma Coronel Aispuro, will soon find herself behind bars too. On Feb. 24, 2021, she was arrested by American officials and accused of helping El Chapo escape in 2015 as well as running the Sinaloa cartel since his imprisonment. On June 10, 2021, Aispuro pled guilty to helping to run the cartel; if convicted, she could face life in prison and be fined up to $10 million.