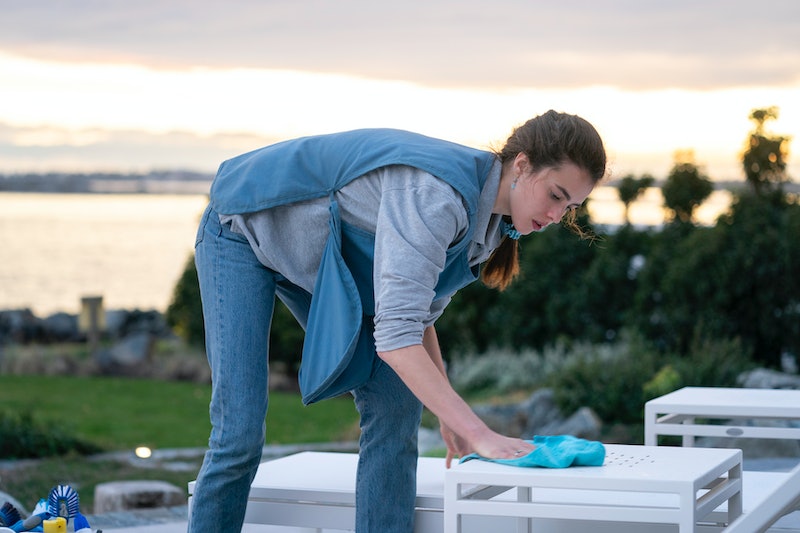 Netflix’s new drama Maid may be based on real events from Stephanie Land’s 2019 memoir, but the show is set on the fictional Fisher Island. Though there are actual places called Fisher Island across the United States, none mirror the affluent Pacific Northwest area where protagonist Alex Russell (Margaret Qualley) works. Land’s book also describes her disparate home life in Port Townsend, Washington — a location that, though real, was renamed Port Hampstead in the show.

In fact, Maid wasn’t even shot in the U.S. at all, with filming taking place in locations around Victoria, British Columbia in Canada over the course of nine months. According to the Times Colonist, more than 160 locations were used during filming, including local spots such as the pier and Greater Canadian Dollar Store in Sidney; Helmcken Market in View Royal; and Gordon Head Recreation Centre and Ten Mile Point in Saanich. “We didn’t have sets,” series creator, Molly Smith Metzler explained to the local paper. “We were a location shoot. That comes through. Victoria is such a character on the show.”

Though Metzler added that she’d “jump at the chance” to shoot another project in Victoria, she also wants to keep it a secret. “I’ve been reluctant to tell too many people about Victoria, because it is such a wonderful place to shoot,” she joked. “I don’t want to contribute to it blowing up as the new Vancouver. But frankly, it has everything you want when you’re shooting, plus that feeling of being somewhere very warm and special.”

Because Maid centers around single mom Alex’s struggle to provide for her daughter Maddy (Rylea Nevaeh Whittet) after escaping an abusive relationship, the production crew made it a point to give back to the community, including local domestic violence shelters. Once filming wrapped in April, the team donated wardrobe and set decorations to multiple organizations, such as Victoria Women’s Transition House (VWTH), Women in Need Society, Y Young Moms Program, and the Salvation Army, per Netflix.

You may not be able to visit Maid’s Fisher Island per se, but you only need to travel a bit further north to take in the lush views that inspired it.