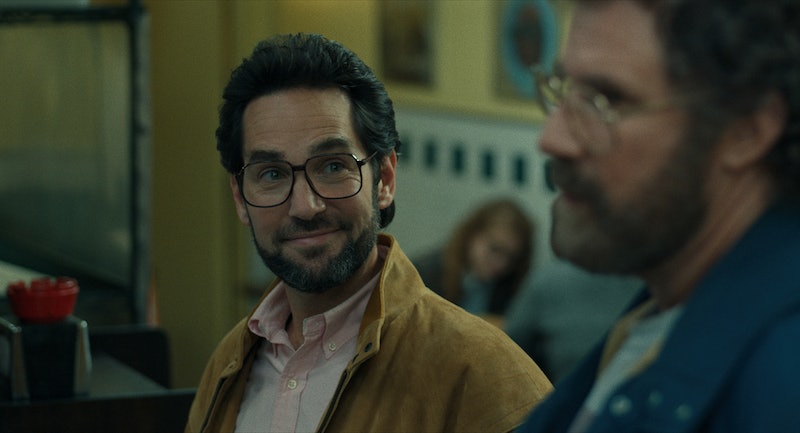 Talk therapy is meant to serve as a safe space to explore your innermost feelings and vulnerabilities. But what happens when your therapist exploits your trust for their own gain? That question is at the heart of Apple TV+’s new miniseries The Shrink Next Door, which is based on the 2019 podcast of the same name and tells the true story of Dr. Isaac Herschkopf (Paul Rudd) and his patient Marty Markowitz (Will Ferrell).

Though Herschkopf has claimed that Markowitz was a willing partner in everything that happened between them, Markowitz alleges that Herschkopf gradually inserted himself into and exerted control over his life over the course of three decades. As the podcast explores, he met Herschkopf in 1981 after inheriting a million-dollar fabric company from his dad. At the time, Markowitz was 39 and under a great deal of stress: both of his parents had passed away and his fiancée had left him. Markowitz’s rabbi suggested he seek treatment from Herschkopf, aka Dr. Ike, a famous psychiatrist who claimed to count Gwyneth Paltrow and Courtney Love among his clients. The two got along well, and Markowitz began seeing Herschkopf three times a week. But over the next 18 months, Herschkopf “very quietly ... started pouring salt into my open wounds,” Markowitz claimed to The Times of Israel.

According to Markowitz, Herschkopf began systematically isolating him from his family, including his sister Phyllis Shapiro, to whom he was close. Eventually, Markowitz says Herschkopf persuaded him to fire his sister from their family’s company. “[Herschkopf] had me write and notarize a letter to my sister saying, ‘Never call me again,’” Markowitz told the New York Post. He claimed that Dr. Ike even had him cut his sister out of all the family photos.

In 1984, Herschkopf had Markowitz create a philanthropic organization, the Yaron Foundation, and leave his eight-figure fortune to the beneficiaries — which just so happened to be Herschkopf and his wife Becky. A year later, the doctor convinced Markowitz to make him a joint signer on his $2.5 million bank account. And in 1986, he instructed Markowitz to purchase the adjoining house to the Southampton home he already owned. Herschkopf immediately took over the space, while Markowitz had to move to the guest quarters and wasn’t allowed to store his food in the main house.

Herschkopf began throwing parties for his celebrity clientele at the house. Many of the guests assumed Markowitz was the caretaker of the property, not the owner. In 1991, Markowitz amended his will again to leave the entire estate to Herschkopf’s wife, giving Herschkopf power of attorney. “The more in crisis you are, the more vulnerable you are — Ike likes you that way,” another one of Herschkopf’s patients explained on the podcast.

This continued for years until Markowitz had a difficult hernia operation in 2010. Herschkopf, his supposed friend of 30 years, didn’t bother to visit or check up on him. When Markowitz was out of the hospital, he immediately wrote Herschkopf and his wife out of his will. Per Bloomberg, Markowitz then reached out to the New York Department of Health and reported Herschkopf for malpractice. They eventually brought charges against Herschkopf, a month after the Shrink Next Door podcast aired in 2019. On April 13, 2021, Herschkopf was ordered to surrender his license to practice psychiatry in New York after the department found him guilty of 16 incidents of professional misconduct, including fraudulence, gross negligence, gross incompetence, and exercising undue influence and moral unfitness.

Since then, Herschkopf has remained out of the public eye, but in a phone interview with The New York Times, he said he planned to appeal the ruling.

Markowitz, meanwhile, told Forward that he is “much happier now” than when he was being treated by Herschkopf. “It’s my 40-year ordeal. It was 29 years under his power and 11 years seeking justice,” he said. “I got justice. That’s what I wanted.”