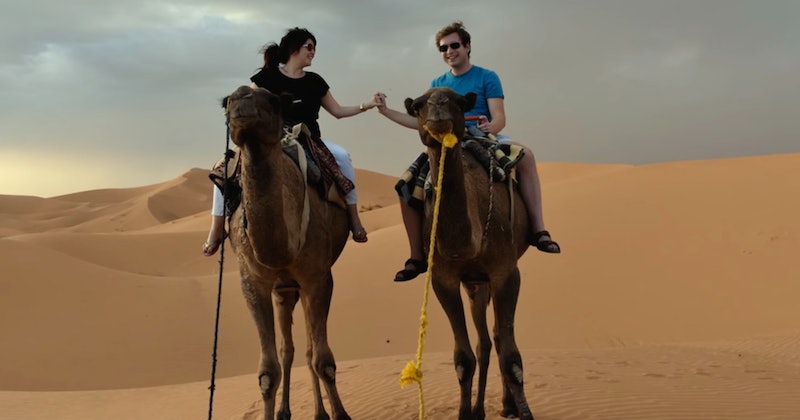 In October 2018, Jennifer Robertson was living the life of her dreams. She’d just married her best friend, Gerald “Gerry” Cotten, at a ceremony in a Scottish castle; she had recently started a business managing property; and, using the money from Cotten’s stupendously profitable Bitcoin exchange, she and Cotten had spent that past couple years traveling the world in high style, visiting everywhere from Malta to Dubai to Morocco to Paris. For their honeymoon, the couple set off for India — where Cotten, only 30, suddenly died due to complications from his Crohn’s disease. In the wake of his death, Robertson, along with the rest of the world, discovered that Cotten had been scamming people who used his exchange, QuadrigaCX (commonly known as Quadriga). Cotten’s duplicity is the subject of Trust No One: The Hunt for the Crypto King, the latest in Netflix’s growing library of documentaries about scam artists. One of the major questions the film poses is whether or not Robertson knew about Cotten’s scheme before he died.

Throughout the film, the crypto investors who lost money through the Quadriga exchange — in some cases, hundreds of thousands of dollars — express their conviction that Robertson must have been in on Cotten’s scam, that she may have killed him, or even that she killed her previous husband (who is, in fact, alive and well). After his death, online trolls harassed Robertson so aggressively that she had to change her phone number and email address, shut down her social media accounts, and temporarily move into a safe house. All the while, she says, she was trying to wrap her mind around the idea that her husband had been a scammer, and the life they’d led together was over. After spending a few years out of the spotlight, she’s emerged to tell her story in full in her memoir Bitcoin Widow: Love, Betrayal and the Missing Millions, coauthored with Stephen Kimber.

Read more to find out how Robertson and Cotten met, what happened to Robertson after his death, and where she is now.

How did Jennifer Robertson and Gerry Cotten meet?

Robertson and Cotten met on a Tinder date in 2014, when they were both around 26 years old. Robertson had already been briefly married to another man, whom she’d divorced; now, single again, she was on the dating app. The match wasn’t love at first sight: As Robertson recalled to The Globe and Mail earlier this year, she found Cotten underwhelming at first. She also didn’t know what Bitcoin was, so she wasn’t exactly bowled over by him telling her than he ran a Bitcoin exchange. Soon, though, the pair grew close: They talked “about everything and anything” for hours, she told The Globe and Mail. And the fact that Cotten would rapidly get rich over first couple years of their relationship didn’t exactly hurt.

Cotten’s money allowed them to travel extensively and in high style, something Robertson loved. A Vanity Fair report on Quadriga notes that, between 2016 and Cotten’s death in 2018, Robertson documented her trips to Machu Picchu, Dubai, Oman, Myanmar, the Maldives, and Rio de Janeiro. She and Cotten often traveled in private jets and when they arrived at their destinations, they enjoyed the best hotels and cruises. Back at home, they were investing in equally luxurious real estate. In an excerpt from Bitcoin Widow, published in The Walrus, Robertson writes, “I won’t lie: I loved being rich. … We could buy a house in Nova Scotia, another in British Columbia, even our own island with a yacht — not just a sailboat — to get us there. We could travel to exotic places.”

Given how much money Cotten and Robertson were spending, it’s understandable that many — including some reviewers of her memoir — are skeptical about her claims that she didn’t know anything about Cotten’s lawbreaking. Without being able to read her mind, it’s impossible to really know what happened.

What happened to Jennifer Robertson after Gerry Cotten died?

Robertson herself admits that she saw her marriage through “rose-coloured [sic] glasses,” but those glasses were forcibly removed after Cotten’s untimely death in India. Robertson couldn’t access Cotten’s devices, which meant that she — along with everybody else — was locked out of Quadriga. People who had transferred money onto the exchange and were trying to cash out couldn’t access their money, which in some cases meant that they had lost access to large sums. Ernst and Young would investigate the company and declare, in June of 2019, that Cotten had used money in the exchange for his own purposes, including trading other people’s assets to other exchanges using multiple dummy accounts. According to Ernst and Young, an accounting firm appointed by the Ontario Securities Commission (OSC) to investigate Quadriga, “Family members were expecting to receive an email with critical Quadriga operating information” — that is, a “dead-man switch” — “within days of Mr. Cotten’s passing,” which would have allowed Robertson to take on management of the exchange, and return money to people who asked for it. But, “Neither the monitor nor others involved with the organization are aware of a dead-man switch email having been received.” And as investigators discovered, in many cases, the money wasn’t there to be returned at all: Cotten had spent it himself.

As she tells it, Robertson was left with the mystery of her husband’s real identity and personality. Was he the “nicest, caring, most loving husband” and “best friend” she remembered or was he someone who, according to an investigator who went through his computers, had “psychopathic tendencies”? It was one thing to try to wrap her mind around the idea that Cotten had scammed users of Quadriga out of money; it was another to find out that he had run his first online Ponzi scheme when he was 15 years old — and never stopped. And while she was trying to sort through her emotions, she was being harassed by people on the internet who didn’t believe her husband was dead.

But Robertson was only one of the people affected by Cotten’s scam: After his death, Quadriga users had lost over $200 million, which Ernst and Young attempted to recover. The Bitcoin that only Cotten could access was lost, but the firm could tackle more concrete assets, including most of what Robertson owned. According to Robertson’s account of the settlement process, she initially resisted the deals Ernst and Young proposed, but as she realized the full extent of Cotten’s duplicity, she realized that there was no alternative — and that her assets were the byproduct of stolen property. The settlement she reached with Ernst and Young in October of 2019 required her to turn over cash and investments as well as real estate and vehicles, and allowed her to keep $90,000 in cash, her personal retirement savings plan (worth $20,000), her personal car (a Jeep), her jewelry (including her wedding ring, but not her engagement ring), and her clothing and some furniture. In her statement at the time, she said, “this settlement will allow me to move on with the next chapter of my life.”

Where is Jennifer Robertson now?

Robertson currently lives in Halifax, in Nova Scotia, with her partner and their chihuahuas Nitro and Gully. She splits her time between working as a waitress and studying for her teaching qualification. She hopes to become an elementary school teacher. Earlier this year, she published her memoir, Bitcoin Widow, mentioned above. With her partner, she is expecting a daughter.