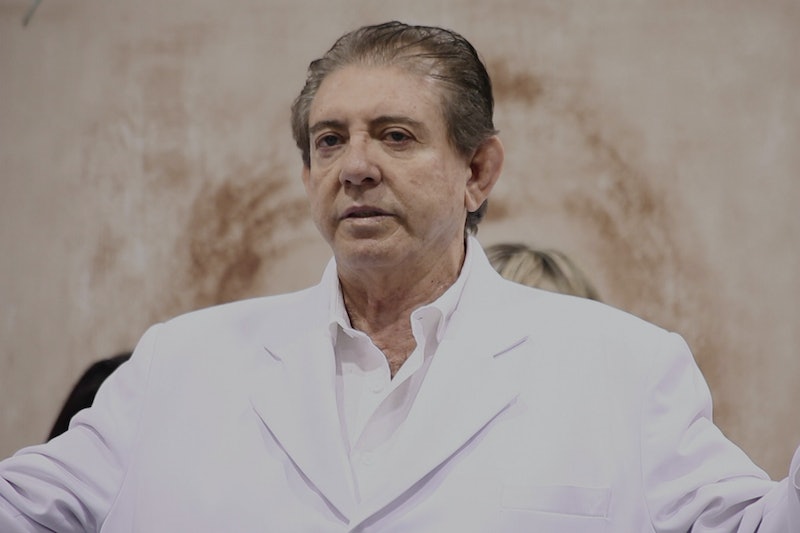 For decades, João Teixeira de Faria operated as a healer and medium in Brazil. Known as "João de Deus" or "John of God,” he offered services including nasal probings, body incisions, and eye scrapings without anesthesia under the guise of helping people, gaining international recognition and even catching the attention of Oprah. But in 2018, his empire came crashing down after hundreds of women accused him of sexual abuse, leading Faria to turn himself in to Brazil’s Civil Police later that year. (Faria has denied all allegations).

Faria’s case is explored in the new Netflix docuseries John of God: The Crimes of a Spiritual Healer, which chronicles his rise and fall over the span of 40 years. Today, Faria is 77 and imprisoned at the Aparecida de Goiania Complex in the Brazilian state of Goias, where he will remain for the rest of his life. He was first sentenced in December 2019 and has so far been convicted three times — for illegal possession of firearms and nine sexual assaults — bringing his collective sentence to 63 years and four months. He has been accused of sexual violence by 50 people in total, but only the nine he’s been convicted for have been brought to trial as of January 2020. On top of that, there is another pending lawsuit for corruption and ideological falsehood.

With a mountain of evidence against him, it’s difficult to understand how Faria was able to operate for as long as he did. According to The New York Times, Faria figured out the importance of money early on. As the youngest of six children, he quit elementary school to help support his family, per his official website. He claimed he had his first vision at 9 years old, and his first experience healing someone when he was 16. Pretending to be a medium for god and other entities like King Solomon, he opened his clinic Casa de Dom Inácio de Loyola in 1976 in the small town of Abadiânia in central Brazil.

Faria soon became the central tourist attraction there, and it was a highly lucrative business. Per 60 Minutes Australia, meeting Faria was free, but he would often charge for extra services like crystal bed sessions, blessed water in the gift shop, and “blessed herbal pills” from his pharmacy. 60 Minutes found that the pills were simply passionflower herbs, but estimated that their sales alone netted Faria about $40 million a year. Per The Sydney Morning Herald, Faria also traveled internationally and held group séances, which people would pay up $795 per ticket for.

As for the surgeries Faria performed to treat ailments like sinus infections and paralysis, he had no medical license and zero relevant training. “He'll admit to it. I sat down with him in an interview and he said, ‘I'm just a simple farmer who when I look at a person and somebody is ailing, the spirits come to me and incorporate my body. They're the ones that instruct my hands to do whatever they need to do to cure someone,’” ABC correspondent John Quiñones told BeliefNet.com. Faria claimed to Quiñones that he couldn’t stand the sight of blood, and when shown footage of him cutting into followers, said, “that’s not me... It's God. It's God using me as an instrument."

Despite the skeptics, Faria courted thousands of followers every year. Per Buzzfeed News, even Oprah claimed to have had a profound experience after meeting with him for an episode of her primetime series Oprah’s Next Chapter. (The written post and aired segment have since been removed from the show’s website, and Oprah released a statement saying she hoped justice would be served).

Faria would likely have continued to operate his business were it not for the hundreds of women who began to accuse him of sexual harassment and abuse amid the #MeToo movement. Over 300 women have claimed that Faria promised to heal their ailments during a private session, only to sexually assault them behind closed doors. These accusers include Faria’s daughter, Dalva Teixeira, who alleged in a 2018 interview with the Brazilian magazine Veja that her father raped and beat her as a child under the pretense of her needing mystical treatment. “My father is a monster,” she said.

Days later, on Dec. 17, 2018, Faria surrendered to authorities. To protect the privacy of the accusers, all of the legal proceedings have continued behind closed doors. Per the paper Correio Braziliense, another 44 women came forward to accuse Faria of abuse on Aug. 14, 2021.

More like this
Where Is The Bling Ring’s Rachel Lee Now?
By Arya Roshanian
Lori Vallow’s Son Was Arrested For Sexual Assault Days Before 'Sins Of Our Mother' Premiered
By Brad Witter
Lori Vallow Faces The Death Penalty For Allegedly Murdering 2 Of Her Children
By Brad Witter
Alleged Cult Leader Larry Ray Is Awaiting Sentencing Following His Conviction
By Brad Witter
Get Even More From Bustle — Sign Up For The Newsletter