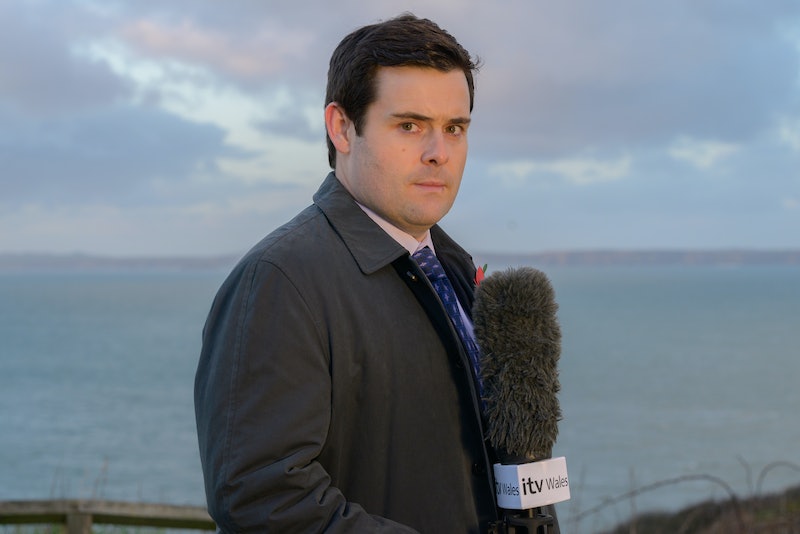 ITV's latest crime drama The Pembrokeshire Murders tells the harrowing true story of two double murders that took place in a picturesque Welsh county during the 1980s. Airing this January, the three-part series details how killer John Cooper (played by Keith Allen) was finally captured after a 20-year investigation. Hollywood actor Luke Evans stars as DCI Steve Wilkins, the detective instrumental in solving the horrific crimes. He stars alongside David Flynn as Jonathan Hill, an ITV journalist who also played a significant role during the investigation. But, with the case having been closed many years ago, where is Jonathan Hill now?

When Hill became involved in the case, he was working for ITV's Wales at Six, where he still remains to this day. He also makes the occasional appearance on ITV's national news bulletins. As a journalist, Hill has reported on plenty of alarming stories, but the Pembrokeshire Murders case stands out in his career. The ITV dramatisation of this case is in fact based on the tell-all book co-written by Hill and DCI Wilkins, called The Pembrokeshire Murders: Catching the Bullseye Killer.

Hill first became involved in the case when he decided to produce a documentary about the then-unsolved murders that had occurred in Pembrokeshire in the 1980s. However, when Hill got in touch with the Dyfed–Powys Police force to ask questions about the case, Wilkins requested that Hill stop his documentary as he was actually in the middle of reinvestigating what had happened and he didn't want the killer to be on alert.

Speaking to ITV, Hills recalls, "So we kept the deal and I agreed to shelve my programme in return for getting the inside story when they were ready. Steve also realised he needed the media because he wanted to make a broadcast, that would send a message to Cooper, who was in prison and they knew that he watched ITV news."

On top of this, Hill also helped to track down footage of Cooper on the TV game show Bullseye, which served as crucial evidence in the arduous investigation that had been left unsolved for 20 years.

The first crimes took place in 1985, when John Cooper murdered brother and sister Richard and Helen Thomas at their isolated mansion, close to Milford Haven, Pembrokeshire, as BBC reports. After fatally shooting his victims, Cooper went on to set the property alight — and four years later, his murderous streak continued when he killed Peter and Gwenda Dixon on the Pembrokeshire coastal path near Little Haven. Per ITV, both crimes were thoroughly investigated but no one was charged.

It was Wilkins who decided to reinvestigate the chilling case in 2006 using pioneering new forensic techniques. Wilkins and his team worked for five years to finally get the killer arrested in 2009 and then imprisoned for life in 2011.

Per Radio Times, Jonathan Hill had always wanted the story to become a TV drama and had been “writing letters to various commissioners” before it was picked up.

Hill and Wilkins were both involved in ITV's adaptation of their book. "Over the last three years Steve and I have worked closely with World Productions and writer Nick Stevens to turn the book into the gripping drama for ITV," he said.

Ahead of the drama's release, Hill praised Keith Allen's portrayal of John Cooper. “Keith absolutely inhabited Cooper," he explained. "He is such an interesting actor anyway but the menace he brings while also bringing this charming, grandfather figure at the same time. I think it will go down as one of his great roles.”

More like this
'Line Of Duty’s Jed Mercurio Has A New Crime Drama In The Works
By El Hunt
After The Bling Ring, Nick Prugo Was Embroiled In Another Scandal
By Arya Roshanian
Nicola Coughlan’s Description Of Meeting Olivia Colman Is Just So Nicola Coughlan
By Sam Ramsden
You’ll Definitely Recognise 'Inside Man's Louis Moffat
By Sophie McEvoy
Get The Very Best Of Bustle/UK