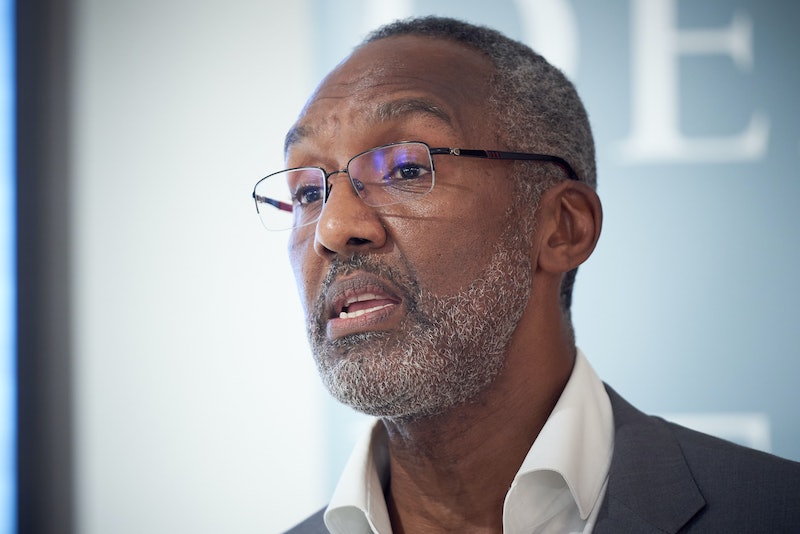 Red, White, and Blue , the third episode in Steve McQueen’s Small Axe anthology, will air on Nov. 2. It tells the remarkable story of Leroy Logan, a British man who walked away from a promising career as a scientist to join the Metropolitan police. Logan’s decision to become a police officer was motivated by his desire to help fix the force’s insidious institutional racism and make lasting change from within. In total, he spent 30 years in policing and retired as a superintendent in 2013. But where is Leroy Logan now, and what has his life looked like since he left the police force?

As previously mentioned, prior to joining the police, Logan worked as a scientist, having graduated from Hackney Community College with a degree in applied biology. However, as the Times writes in a recent interview piece they did with Logan, he found lab work uninspiring and was “encouraged by policemen he knew to think about applying for the Met.”

While he was in the middle of the application process, however, Logan’s father Kenneth was brutally assaulted within an inch of his life by the police after they claimed he had parked his lorry in the wrong spot and had then resisted arrest. Kenneth was unaware that his son had begun taking steps to join the force himself a few weeks prior and was furious when he found out. Logan told the Guardian that the decision to join the police the “biggest breakthrough and biggest nightmare” of his life.

Logan's 30 years in the Met was filled with significant achievements – including establishing the National Black Police Association (BPA) and having crucial involvement in the publishing and implementing of the Macpherson report – but also much hardship. Logan was subject to overt racism from his colleagues and a huge amount of resistant to the BPA's work.

John Boyega takes on the role of Logan in Red, White and Blue, and the Star Wars actor portrays the highs and lows of his life as a police officer. Speaking to the Times, Logan explained how difficult it is to get his head around that idea. He told the newspaper that, if someone had told him during his time in the force that a Star Wars actor would be playing him in a few years time, "I’d have said, 'Stop taking man-made substances. You’re off your head.'"

Logan is now 63 and a father to three children. His autobiography Closing Ranks: My Life as a Cop was published in September of this year. He devotes much of his time to youth projects, with his main focus being VOYAGE (Voice Of Youth And Genuine Empowerment), a social justice charity started by Leroy that aims to empower and support marginalised Black youth in the UK. Logan remains an executive member of the BPA and a founding member of the Black Police Association Charitable Trust. He also contributes to the Guardian, writing about policing in the UK.