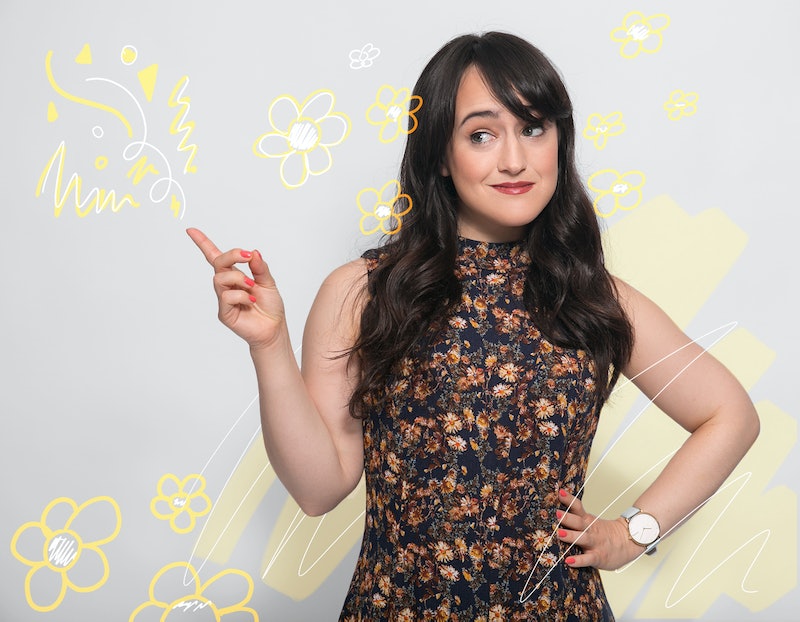 When the movie Matilda came out in 1996, it wasn't an instant success, at least by box office standards; its original profit barely made up for its budget, and it took a widespread VHS release for it to step over that line. But culturally, the film's impact was massive. There was the dialogue, instantly quoted by every preteen girl across the nation; the soundtrack, in which Rusted Root's "Send Me On My Way" became everyone's favorite earworm; and the rise of the movie's young lead, Mara Wilson, whose turn as the super-powered prodigy made her one of the biggest child stars on the planet. Yet for many people — especially those Wilson's own age or younger, who grew up with Matilda Wormwood as as nothing less than an icon — it became impossible to separate the star's portrayal of the bold, brilliant child from her actual personality, something that Wilson, now 29, says weighed on her heavily.

"I remember thinking, everybody thinks that I’m brave because I played a character that’s brave, but I’m afraid of everything," she tells me. We're sitting in a conference room in Bustle's New York office on an early August day, the sun streaming in through the windows. Watching Wilson — a successful writer and comedian who's now happily trying on dresses, musing about friends "Abbi" (Jacobson) and "Ilana" (Glazer), and excitedly discussing the release of her new memoir, aptly titled Where Am I Now ? — it's hard to imagine her riddled in anxiety and fear. Yet for years after the movie's release, she says, the pressure of playing characters as beloved for being badass as Matilda and the little girl from Mrs. Doubtfire was stifling.

"I wish that I had let myself know that it’s OK to be be scared, and that fear passes," Wilson says. "I wish I had known that, because I resented, sometimes, that I played these strong characters and I did not feel that way myself."

These days, Wilson is fully in the spotlight, managing a hilariously must-read Twitter while promoting the memoir, out Sept. 13; working steadily as a voice actor (she recently lent her voice to several episodes of Bojack Horseman); and telling stories about her life at clubs and venues around New York. She's embracing her childhood wholeheartedly, primarily by writing the book, which addresses the stardom brought on by Matilda and Mrs. Doubtfire, but also by talking openly about her experiences. She's joked about picking Matilda on "favorite '90s movie" Buzzfeed quizzes; has taken a role in Bojack, a show ironically about a former child star; and, recently, even guested on Broad City as a waiter during a Mrs. Doubtfire tribute scene. Yet for many years, Wilson says, being so comfortable with her past — or even publicly addressing it at all — would have been unimaginable.

So she shied away from the comparisons, and instead tried to focus people's attention away from her time in Hollywood to her recent adult success, which don't involve film acting. It doesn't always work, of course — the first question on Wilson's Frequently Asked Questions page is, "Are You Matilda?" answered by, "No, but I played her in a movie." The Q&A makes her message (at least that written a few years back) clear: Wilson's child stardom is to stay far, far in the past. Despite what some people may think, the reason for this separation wasn't that she resented her past fame or didn't appreciate the success it brought. Online and in interviews, Wilson has made it clear that she's fully aware of how much the fact that she starred in Matilda has created interest in her work as an adult. For Wilson, stepping away from her past wasn't about being ungrateful. It was more about a lack of understanding.

For a long time, she says, she simply didn't realize how much Matilda meant to fans, or how important she, as the actor associated with the character, was in their eyes. "I thought that I was something that nobody really cared about," she says. "Imposter syndrome, I guess."

But between the rise of '90s nostalgia and real-life encounters with fans, slowly, Wilson began to realize the effect her Hollywood past can have. At a bar not too long ago, she ended up talking with a woman whose niece, a major Matilda fan, had just passed away; they spoke all night, the woman crying as the duo bonded over the connection. Other times, Wilson has had women come up to her, all ecstatic to tell her that Matilda gave their "shy, nerdy, girl" younger selves hope. "It took me a long time to make peace with it," Wilson says of her past now. "That's a big responsibility. I can't take that responsibility lightly."

But seeing how much she matters to so many people, especially young women, gave her the courage she needed to embrace the part of her past she had worked so hard to leave behind. "It made me think, I can go on, I can move on, I can do more with my life," Wilson says. "It’s empowering."

Yet even after that realization came, it wasn't an automatic switch from reluctant former child star to writer of a memoir whose cover features a photo of her dressed in Matilda's iconic blue and white outfit. Wilson still struggled to be OK with the Matilda comparisons, due to the knowledge, she says, that "most actors aren’t as interesting as the parts that they play" weighing on her every time. She thought about writing other types of books, unsure if she wanted to tackle her past head-on, but the interest people showed in her childhood eventually led her to the path of Where Am I Now? And besides, she says, "I wanted to explain myself."

So she did. For the memoir, she left no stone unturned, writing with equal candor about her time in Hollywood, her struggles with anxiety and OCD, and her mother's death, which occurred when Wilson was just 8 years old, in the midst of filming Matilda. A few of the chapters proved difficult to write; the essay on her battles with OCD, anxiety, and depression, she says, was the most challenging, causing her to break down crying because of how much she wishes now she had gotten treatment sooner. Other sections, she says, were practically bursting out of her. An essay on the burden of being constantly called "cute" as a child and then, as a pre-teen, being told she wasn't "cute enough" for Hollywood, was one she was itching to write. Because when the "cute" comments stopped and roles stopped coming, "I realized that I had lost this superpower I didn't even know I had," she says now. "It made me want to reject that as a label for myself. It made me want to prove that there was more to me than the way that I looked."

Then there were the essays about leaving the film industry, at least for a while. Speaking of her decision now, Wilson jokes about it, saying that it was a "mutual decision" by Hollywood and herself to part ways. She'd come to realize that film acting was not her strong suit ("You can’t be a perfectionist, you have to be good at taking directions, and not be bossy. None of those are my qualities," she says, laughing) and fewer parts were being offered to her the older she grew. While Wilson says she doesn't regret leaving, she's occasionally had her doubts. When she went to boarding school instead of auditioning for Arrested Development, for instance, or worked on writing instead of taking on theater roles, it was hard not to question her path, she says. Ultimately, though, she's happy where she is, a writer and storyteller first, occasional voice-over actor second.

Besides, it's not like her film past is ever truly behind her. At 20 years old, Matilda is as much a cultural touchstone as ever, a movie whose messages of strength and empowerment, particularly among women, still resonate strongly with audiences. Even today, it's far too rare to find a film in which a clever, powerful girl is the lead character, and in 1996, it was even more of an anomaly. "We were really starved for these characters who were smart and powerful, particularly for young women," Wilson says. "How many girl characters out there were praised for being intelligent and thoughtful and rebellious?"

Matilda has lived on for a thousand different reasons — the magic, the music, the infamously terrifying Chokey — but its message, that young girls are capable of incredible things, is a primary one.

And while it may have taken Wilson a bit of time to come to terms with representing all of the qualities her famous character possesses, she's made it to a place where she can be her own person, even while embracing Matilda's legacy. "It's a lot of responsibility," she says. "But it’s also a lot of joy." Wilson may have shied away from her past before, but these days, that fear of not being enough has been replaced by the happy knowledge that she's exactly that.