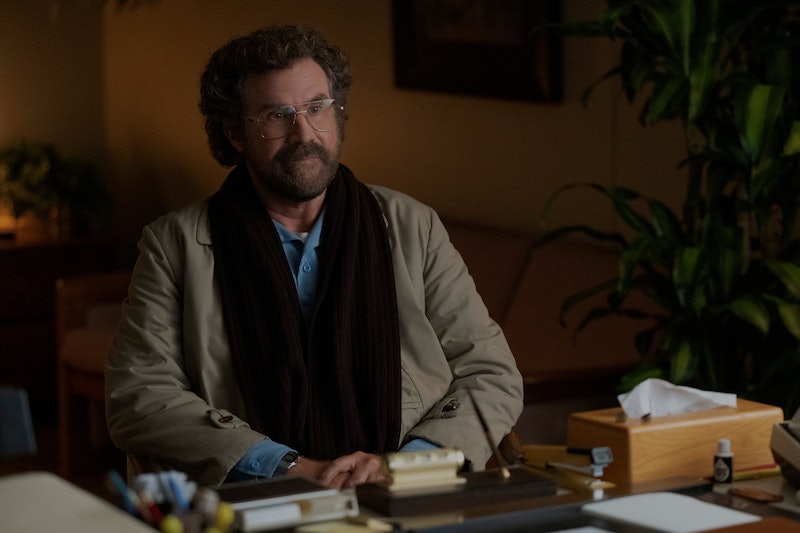 In the new Apple TV+ miniseries The Shrink Next Door, Will Ferrell plays Martin “Marty” Markowitz, an anxious and insecure 39-year-old buckling under the stress of running his late father’s textile company. Tired of his waffling, his sister Phyllis (Kathryn Hahn) sends him to see Dr. Isaac “Ike” Herschkopf (Paul Rudd), a famous psychiatrist who comes highly recommended by her rabbi. After their first meeting, Dr. Ike tells Marty that he “lets people” use him, and that he’s not going to let it happen anymore — “Not today. Not tomorrow. Not ever."

The series explores just how wrong that statement is. Using manipulation and mind games, Herschkopf alienates Marty from everyone he loves, including Phyllis. Soon, he takes over Marty’s finances and claims his large Southampton home as his own. He begins throwing parties there for his celebrity clientele and never once mentions that the shy man working the grill in the background is actually the owner of the house.

This may all sound too wild to be true, but The Shrink Next Door is based on the real experiences of Marty Markowitz. Markowitz is no longer in contact with Herschkopf, but it took him nearly 30 years to cut ties with the doctor, who he alleges seized control over his life over the course of three decades. (Herschkopf has claimed that Markowitz was a willing partner in everything that happened between them).

As the podcast details, the two met in 1981 after a rabbi recommended Herschkopf to Markowitz. Within two years, Markowitz says Herschkopf had convinced him to fire and disinherit his sister, slowly isolating him from the rest of his family. According to Markowitz, Herschkopf also directed him to create a private foundation whose funds primarily benefited the doctor and his family, and to re-write his will to include Herschkopf’s wife, Becky. He also got himself listed as the co-owner of Markowitz’s $2.5 million bank account.

“I was living a lie when I was with Ike. Ike sucked me into this cult ... and I was spending six or seven hours a week with him,” Markowitz told Forward. “He didn’t let me have a girlfriend. I would go on a date, and he’d call her a gold digger. He would say, ‘Everyone is out to get you, I’m going to protect you.’ And I was stupid enough to buy it.”

This continued for decades until Markowitz broke off the relationship in 2010, when Herschkopf, his supposed friend, failed to even check up on him in the hospital after a hernia surgery. Markowitz reconnected with his sister after 27 years, then filed his first complaint against Herschkopf with the New York State Department in 2012. But it took seven years for them to actually examine the claims. In April 2021, the New York State Department stripped Herschkopf of his license to practice psychiatry, citing 16 strikes of professional misconduct, including fraudulence, gross negligence, gross incompetence, and exercising undue influence and moral unfitness. (In a phone interview with The New York Times, Herschkopf said he planned to appeal the ruling.)

Markowitz estimates that he spent over $3 million on his visits to Herschkopf over those three decades. “Occasionally I’ll get a flashback of him,” he told The New York Post. But he added that he’s happy and that Herschkopf is “not in [his] ear” anymore.

Per Forward, Markowitz, now 79, is closing his father’s business and retiring. He has a girlfriend, who he met while in Phuket, Thailand, and plans to stay off the radar for the foreseeable future. “All I want is a nice quiet life,” Markowitz said. “I am going to retire and travel the world with my girlfriend.”

More like this
The Plane Crash In 'Dear Edward' Is Based On A 2010 Tragedy
By Grace Wehniainen
Stephen Graham & Steve McQueen Are Working On A Wartime Drama
By Darshita Goyal
Yes, Maurizio Mian's Cult In 'Gunther’s Millions' Was About Eugenics
By Gretchen Smail
The Mysterious Gunther Corporation From 'Gunther’s Millions' Has Dissolved
By Brad Witter
Get Even More From Bustle — Sign Up For The Newsletter
From hair trends to relationship advice, our daily newsletter has everything you need to sound like a person who’s on TikTok, even if you aren’t.