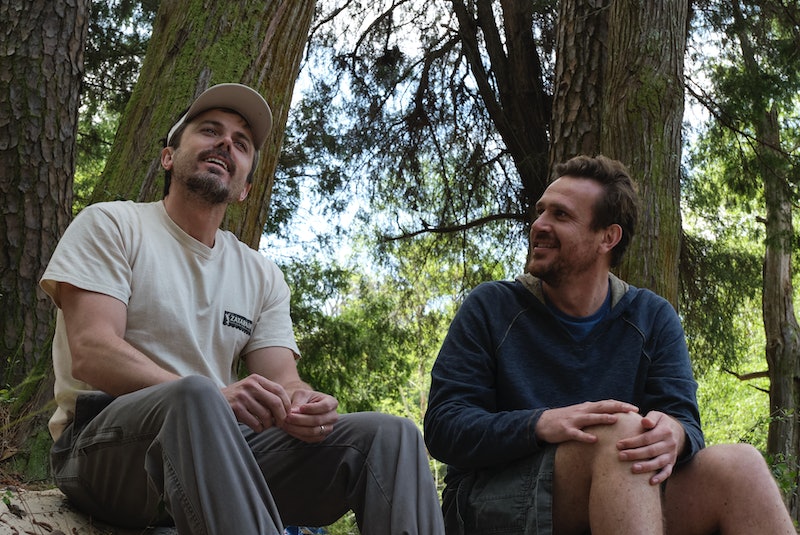 When journalist Matthew Teague's wife Nicole was diagnosed with cancer, their best friend Dane Faucheux moved in to help out for a couple of weeks... then didn't go home for a couple of years. Over the course of Nicole's diagnosis, treatment, and eventual death, Dane remained a constant element of support to Matthew, Nicole, and their two young girls. His presence moved Teague so much that a year later, Teague wrote "The Friend: Love is Not Enough" for Esquire. The article, which won the National Magazine Award, is a 6,000-word ode to Dane's selfless act and Nicole's final days.

Matthew, Nicole, and Dane's true story has been transformed from the page to the screen in the new film Our Friend, which is available to stream now. Directed by Gabriela Cowperthwaite, the movie stars Jason Segel as Dane, Dakota Johnson as Nicole, and Casey Affleck as Teague. From reading Teague's devastating essay, we know Nicole eventually passed from ovarian cancer. But where is Teague now?

A note before the closing credits of Our Friend explains that Teague still lives in Fairhope, Alabama, in the same house where he and Nicole moved to raise their family and lived together her final few years. He lives with his and Nicole's two daughters, Molly and Evangeline, and has since remarried. According to the New York Times, the family has recently welcomed a son, Wilder, who's 3 months old. Teague still works as a journalist, and on his website, he details that he's a contributor to National Geographic, The Atlantic, Esquire, Sports Illustrated, Men's Journal, and other magazines.

"The girls and I are doing well," Teague tells Bustle in an email. "They're so strong and so smart, and — I can only attribute this to their experience losing their mom — they're so compassionate. In one sense I hate that they're wise, at such a young age. But in another sense I'm grateful that's what they came away with...every time I watched a scene involving the young actors playing my daughters it felt like re-living those moments. I was wrecked. Then at the end of the scene, they'd bounce off set looking for snacks, and I'd think, 'Oh. Right. This is just the pretend version.'"

Our Friend was actually shot in Fairhope, Alabama as well, in a house just a few doors down from the Teague's real home. In a junket video released by Our Friend's publicity team, Teague explained that he was overjoyed at the prospect of the film shooting so close to where Nicole lived and died and where he still calls home. "I think it imbued the project with something that you would have a hard time getting [somewhere else]," he says, "because everybody here in town knows my family, they knew my wife. She's here, she infuses everything and that would be difficult to capture otherwise." And it's just another way Teague is helping to keep his wife's memory alive.