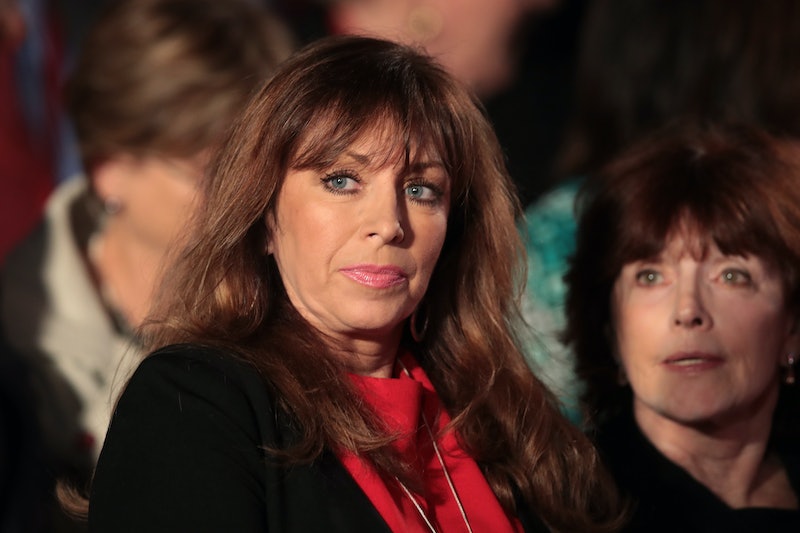 Paula Jones was attending the 1991 Annual Governor's Quality Conference in Little Rock, Arkansas when she received an invitation to a meeting that would ultimately put her at the center of public scrutiny. She joined then-Arkansas Governor Bill Clinton in his hotel room, where she alleges he exposed himself and propositioned her.

As depicted in Impeachment: American Crime Story, Jones went public with her claims three years later, setting off a chain of events that would ultimately lead to Clinton’s impeachment from presidential office. She filed her lawsuit in May 1994, two days before the three-year statute of limitations expired. Her case was initially dismissed, but after the Monica Lewinsky scandal broke in 1998, she successfully appealed the decision. Though Clinton has never admitted wrongdoing, he settled the lawsuit in November 1998, paying Jones $850,000 in exchange for her dropping sexual misconduct charges.

According to The Baltimore Sun, all but $200,000 of the payout went toward Jones’ legal fees. In order to stay afloat, the former Arkansas state employee appeared in ads for No Excuses jeans and ultimately posed nude in Penthouse in 2000. “I needed the money,” Jones explained to Vanity Fair in 2017. “I was going through a separation at the time, a divorce... I had to pay taxes [on earnings from the settlement]. I had to buy a home for me and my boys ... the I.R.S. was after me.”

In 2001, the mom of two married Steven McFadden. The next year, she competed in (and lost) a Celebrity Boxing match to Tonya Harding. Despite telling Time in 2009 that she doesn't “want to make a career out of what happened with the scandal,” she’s attempted to sell audio recordings of her discussions with Gennifer Flowers — who had a sexual relationship with Clinton — about their encounters with the disgraced president. She also played herself in a small-budget comedy about the Clinton-Lewinsky scandal called The Blue Dress.

Jones told Time that she felt like a “political pawn used by conservatives [who were] out to get Clinton” in the ‘90s. She’s tried to tell more of her side of the story in a book, but claimed to Vanity Fair that no publisher will give her an opportunity. “I’ve had people do several [outlines] for me, actually, and they never get anywhere,” she said in 2017.

Following the Clinton political scandal, Jones has supported several Republican politicians — namely Donald Trump. She was spotted at a Trump rally in 2016 and later appeared in a news conference for Trump alongside Juanita Broaddrick, Kathy Shelton, and Kathleen Willey, all of whom claim to have been wronged by Bill or Hillary Clinton in some way. After a reporter asked Trump if his star power entitled him to grope women without their consent, Jones responded angrily: “Why don’t you go ask Bill Clinton that? Why don’t you ask Hillary as well?”

Though her lawsuit against Clinton was difficult, Jones told Vanity Fair that she would go through it all over again. “I’m who I am today because of it,” she said. “I’m a stronger person. I was a very, very introverted, shy, quiet, submissive-type person before all this. [In addition,] it has made a lot of key laws. Like, for instance, if somebody files a lawsuit about sexual harassment in the workplace, they’re going to go get my case. I think it’s probably made it a lot better for women in the workplace because of what happened with my case.”

Jones is now 54 and works as a real estate agent in Arkansas.

More like this
'Grey's Anatomy's New Intern Got Advice From Dr. Bailey Herself
By Grace Wehniainen
Paul Mescal, Man Of Mystery
By Samantha Leach and Heather Hazzan
The 'Reasonable Doubt' Cast Includes A 'Save The Last Dance' Reunion
By Grace Wehniainen
The 'Skins' Cast Shared The Reunion We’ve Been Waiting For
By Sophie McEvoy
Get Even More From Bustle — Sign Up For The Newsletter