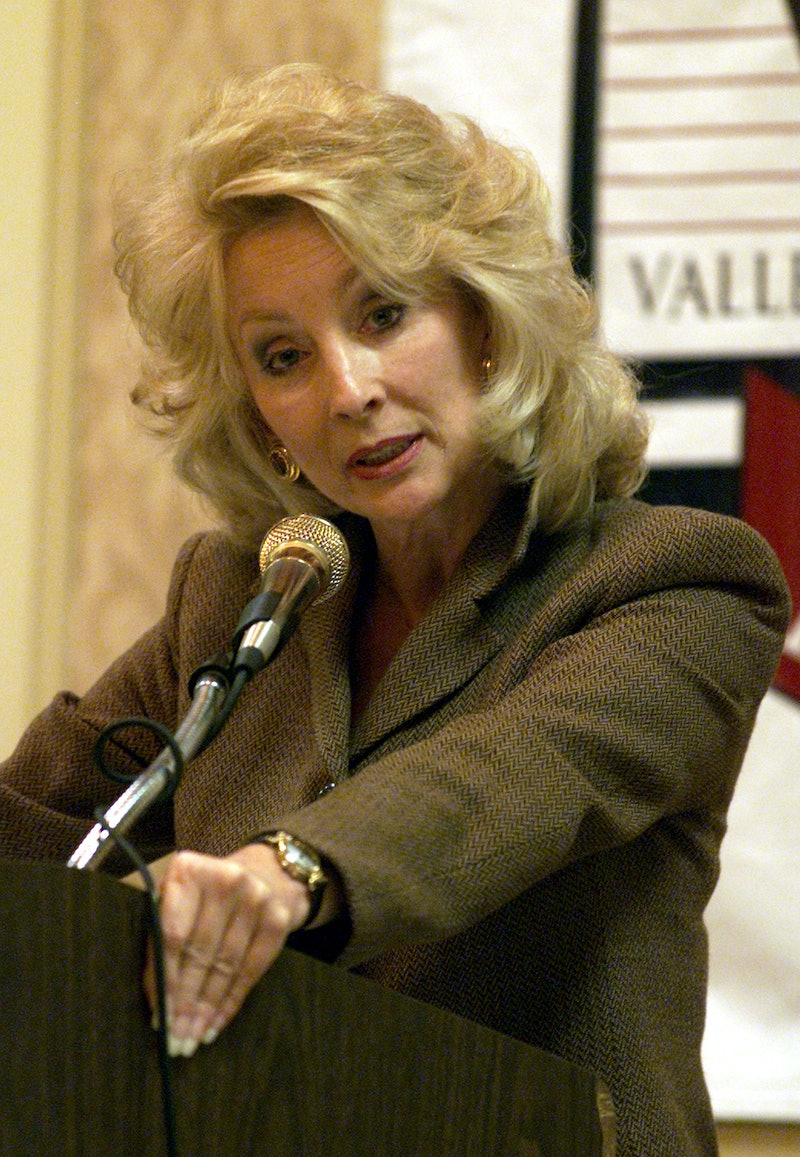 At the height of President Bill Clinton’s ‘90s impeachment scandal, Susan Carpenter-McMillan was a staple on every news program. After Paula Jones accused Clinton of exposing himself and propositioning her in a hotel room during his stint as Arkansas’ governor, Carpenter-McMillan became Jones’ spokesperson, appearing on everything from Meet the Press and Crossfire to Larry King Live, Today, and Hannity & Colmes. (Clinton has repeatedly denied Jones’ allegations). She called the then-president a “slimeball,” a “liar,” and a “philanderer,” with Slate hailing her vitriolic commentary the “summer’s best entertainment” in 1997. Later, though, Jones came to believe that the right-wing conservatives who funded her services had “used” her for political gain.

As portrayed in FX’s Impeachment: American Crime Story, Carpenter-McMillan is a self-described conservative feminist and longtime anti-abortion activist (though she later admitted to having had two abortions herself). She first captured national attention during her 1986 crusade to help a dying newborn known as “Baby Jesse” receive a heart transplant from Loma Linda University Medical Center. As executive director of the Pasadena, California-based Women's Coalition, she also sponsored a 1996 California law that mandated chemical castrations for repeat sex offenders. But Carpenter-McMillan really catapulted to fame when she began working for Jones in the spring of 1997.

According to Slate, Carpenter-McMillan befriended Jones in 1995 because she felt liberal women had been dismissive toward the former Arkansas state employee. Soon, she came to consider Jones as a “younger sister,” ultimately taking control of the lawsuit Jones had filed against Clinton in May 1994. In 1997, she talked Jones out of accepting a $700,000 settlement because it did not include an apology from Clinton, prompting Jones’ attorneys Gilbert Davis and Joseph Cammarata to quit and William McMillan to step in as negotiator. They reached a final settlement in November 1998 that required Clinton to pay Jones $850,000 in exchange for her dropping sexual misconduct charges, though he never apologized or admitted wrongdoing.

After the media attention from the lawsuit died down, Carpenter-McMillan unsuccessfully ran to be the Republican candidate from California’s 44th District for State Assembly in 2000 — something she told the Los Angeles Times she’d “always wanted to” do. She added that she remained committed to advocating for people like Jones. “To this day, I am always drawn to the underdog. That is my passion,” she said at the time.

After losing the election (and weathering frequent attacks from her opponents), McMillan largely disappeared from the public eye. She’s now 71 years old and shares two daughters with her ex William McMillan III: Cameo, 43, and Tara, 36.

More like this
Man Meets Politics: ‘Boy Meets World’ Star Ben Savage Is Running For Congress
By Jake Viswanath
'The Queen’s Gambit' Season 2 Tweet Wasn’t From Anya Taylor-Joy
By Mary Kate McGrath, Jack Irvin and Grace Wehniainen
Linda Ronstadt’s “Long Long Time” Plays A Pivotal Role In The Last Of Us
By Brad Witter
Michael B. Jordan Tackled His "Public Breakup" With Lori Harvey On 'SNL'
By Brad Witter
Get Even More From Bustle — Sign Up For The Newsletter
From hair trends to relationship advice, our daily newsletter has everything you need to sound like a person who’s on TikTok, even if you aren’t.