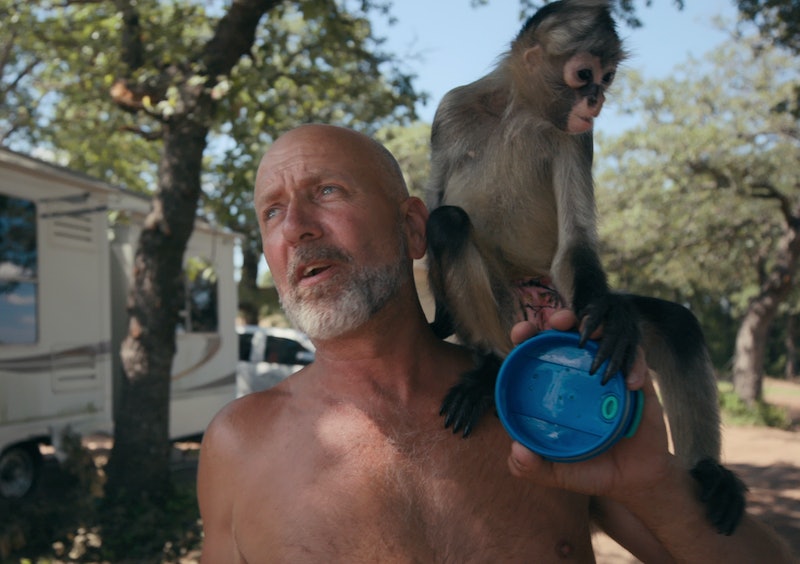 Per WHAS11, Wildlife in Need was founded in 1999 as a non-profit claiming to rescue and rehabilitate indigenous wildlife. But former volunteer Carly Brigaman claimed that the zoo “is not what it claims to be ... animals that go there, they suffer a very terrible life."

Workers alleged that animals were often parched, starved, and kept in inadequate cages. They also claimed there weren’t enough staff members to properly tend to the animals, and that the only vet on staff regularly botched procedures, causing animals to die. Additionally, employees alleged that Stark mistreated animals who were sick, including an incident during which he beat a leopard cub to death with a baseball bat. On top of that, Stark kept no paperwork on which animals were brought in or when they were supposedly released. This is because, the workers alleged, most of the animals were killed, not set free. When the WHAS11 team asked Stark if he could show them the paperwork that proved he’d rehabilitated and released “thousands and thousands” of animals like he claimed, he said, “No. Ain't nobody's [expletive] business.”

Stark’s many crimes caught up to him in February 2020, when a USDA administrative judge ruled that Stark had "willfully violated” the Animal Welfare Act over 120 times between January 2012 through January 2016. The judge revoked Wildlife in Need’s federal license and fined the facility $300,000 and Stark $40,000 in civil penalties.

Stark immediately moved to appeal the ruling, but it was upheld in April 2020 by a USDA judicial officer. Stark’s attorney, Clay Culotta, told WHAS11 that he intended to appeal once again, but he missed the June 8, 2020 deadline to file the paperwork.

Stark continued to face numerous setbacks in court from there. In August 2020, PETA won a lawsuit against Stark and his ex-wife after it was revealed that Wildlife in Need prematurely separated big cat cubs from their mothers and used declawing procedures that caused the cubs to suffer. This ruling led to a permanent injunction barring Stark from owning big cats, and he was ordered to pay nearly $734,000 to PETA. (In June 2021, this number was upped to $750,000 to account for PETA’s legal fees). Following the decision, 25 big cats were transferred from Stark and Lowe’s zoo to accredited sanctuaries, per WHAS11.

By September 2020, there were two warrants out for Stark’s arrest due to charges of battery and intimidation of a Clark County prosecutor. Stark attempted to flee the charges, but in October 2020 he was captured in Granville, New York with a fake grenade on him. He pleaded guilty to a misdemeanor charge of intimidation, and was sentenced to time served after being in jail for 10 days. Wildlife in Need was dissolved in November 2020.

In April 2021, an Indiana judge discovered that Stark had fraudulently used funds from Wildlife in Need for his own personal use. As a result, Stark was officially and permanently forbidden from ever owning or exhibiting exotic or native animals. The remaining animals at Wildlife in Need are all currently in the care of the Indianapolis Zoo. After the ruling, Stark posted a Facebook Live video in which he said he couldn’t “think right mentally anymore” while brandishing a gun. He was taken into custody and his license to carry handguns was also suspended.

On Oct. 12, 2021, Stark was held in contempt of court after failing to appear to explain why he was auctioning off what was left of Wildlife in Need, presumably for his own gain. On Oct. 22, 2021, Stark posted a Facebook Live declaring bankruptcy. A hearing regarding the collection of his assets is scheduled for Dec. 16.

More like this
The Dog & His Handler In 'Gunther’s Millions' Are Worth, Well, Millions
By Gretchen Smail
You Might Want To Rewatch This Key 'On My Block' Scene To Understand 'Freeridge'
By Grace Wehniainen
The 'Freeridge' Cast Shared Their Hopes For A Potential Season 2
By Grace Wehniainen
Ashton Kutcher Wants Danny Masterson “To Be Found Innocent” In Rape Retrial
By Jake Viswanath
Get Even More From Bustle — Sign Up For The Newsletter
From hair trends to relationship advice, our daily newsletter has everything you need to sound like a person who’s on TikTok, even if you aren’t.