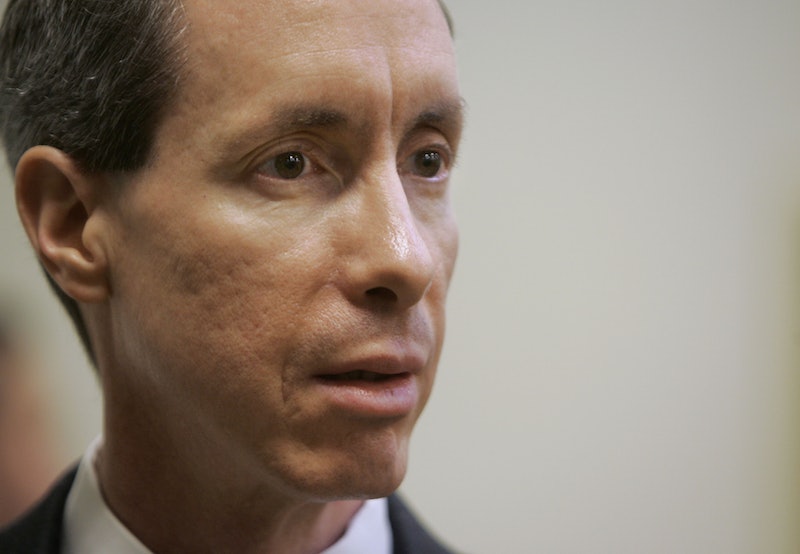 Peacock’s true crime docuseries Preaching Evil: A Wife on the Run With Warren Jeffs examines the polygamist cult leader through the lens of his favorite wife, Naomi Jessop. As Jeffs’ personal scribe, she was “by his side for every step of his dramatic rise to power and his fall from grace,” per NBC’s streaming service. Despite the atrocities she recounts, Jeffs, who is now 66 years old, still has many followers and has even reportedly continued to oversee his church in the decade since he was sentenced to life in prison plus 20 years for sexually assaulting two minors he claimed were his “spiritual wives.”

Following the 2002 death of his 92-year-old father, Rulon T. Jeffs, he inherited the role of “president and prophet” of the Fundamentalist Church of Jesus Christ of Latter-Day Saints (FLDS) — along with his approximately 20 wives. (Per his New York Times obituary, Rulon also had roughly 60 children, as well as hundreds of grandchildren, at the time of his death.) Based on the Arizona-Utah border at what is known as “The Creek,” the FLDS is a radical polygamist sect that broke away from the Mormon Church when it renounced polygamy more than a century ago. Within years of ascending to power, Jeffs reportedly had 78 wives in addition to his legal spouse, and as of 2011, 24 of them were under the age of 17, per the Washington Post.

Just three years into leading FLDS, Jeffs went on the run after Arizona authorities indicted him on felony charges of sexual conduct with a minor and conspiracy to commit sexual conduct with a minor in 2005. The following year, he was also charged with two counts of rape as an accomplice in Utah for arranging a marriage between a then-14-year-old and her then-19-year-old cousin, and the FBI placed Jeffs on its Ten Most Wanted Fugitives list. He was eventually captured and arrested during a routine traffic stop outside Las Vegas in August 2006 with a cache of cellphones, various wigs and disguises, and more than $50,000 cash in his possession.

After he faced charges in Utah and then Arizona, Jeffs was convicted in Texas of the charges that sent him to prison for life in August 2011, based on evidence uncovered during a 2008 raid on the YFZ Ranch. After he was found guilty on two counts of sexual assault of a child, Jeffs — who represented himself at trial — was remanded to the Texas Department of Criminal Justice. As of 2022, Jeffs was housed in Palestine, Texas’ Louis C. Powledge Unit, and his earliest parole eligibility date is July 22, 2038.

In the 2018 A&E docuseries Warren Jeffs: Prophet of Evil, one of his oldest daughters, Rachel Jeffs — as well as authorities — alleged that he was still in full control of the FLDS from prison. “We have evidence he continues to direct day-to-day operations of the church, including things like excommunicating individuals and directing what women should be placed with what caretakers,” Sean Keveney, an attorney for the U.S. Department of Justice, told filmmakers at the time.

Those who continue to follow Jeffs believe that he has been falsely incarcerated to atone for their sins, something he wrote about as a “mouthpiece of God” in his 2012 book, Jesus Christ Message to All Nations. Prison officials have said they suspected Jeffs’ brothers used hidden recording devices to capture their weekly meetings with him, per the A&E doc, and that he also wrote coded letters to his wives to help disseminate his messages.

However, by August 2019, Jeffs had allegedly “suffered a mental breakdown” in prison, according to an attorney for the Arizona-Utah community trust that once belonged to the FLDS. “The trust has received reports that Warren Jeffs has suffered a mental breakdown, and there seems to be a high likelihood that Warren Jeffs is not mentally competent to provide admissible testimony,” lawyer Zachary Shields wrote in a court filing, as reported by the Associated Press, after a woman filed a lawsuit alleging Jeffs had sexually abused her as a child.

Prior to Shields’ claim that Jeffs was mentally unfit to give a deposition in 2019, Jeffs had already made several suicide attempts. After first attempting suicide in a Utah jail in 2007, Jeffs required further medical intervention in 2009 and again in 2011 following extended fasts. In the latter instance, Texas prison doctors had to temporarily place Jeffs in a medically induced coma to save his life.

Though Jeffs will likely spend the rest of his life in prison, he will be 82 years old when he becomes eligible for parole.

More like this
Betty Gore’s Daughter Honored Her After She Became A Mother Herself
By Brad Witter
Justin Timberlake’s ‘Candy’ Character Really Investigated Betty Gore’s Killing
By Brad Witter
The True Story Of Candy Montgomery From Hulu’s True Crime Series
By Radhika Menon
Where Is Allan Gore Now? The ‘Candy’ Subject Moved On Shortly After Betty’s Death
By Gretchen Smail
Get Even More From Bustle — Sign Up For The Newsletter