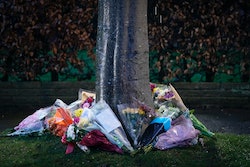 The tragic case of Yousef Makki, a 17-year-old student who was stabbed to death in a Manchester suburb in 2019, is the focus of a brand new Channel 4 documentary. Killed By A Rich Kid takes a forensic deep dive into the case, broadcasting bodycam footage from the crime scene, even. Featured in the documentary is Makki’s sister, Jade Akoum, and follows the prosecution and acquittal Joshua Molnar. But where is Yousef Makki’s family now?

According to the documentary synopsis, three years on “the family still have questions about how and why he died.” Following the inquest into Makki’s death in November 2021, the coroner recorded a narrative conclusion, saying: "Yousef died from complications of a stab wound to the chest.” But the Makki family is seeking a judicial review to overturn the coroner's inconclusive verdict, per ITV.

In the court case that followed Makki’s death, Joshua Molnar was acquitted of murder and manslaughter. He was found guilty of perverting the course of justice. Adam Chowdhary was acquitted of perverting the course of justice, per the Guardian. Chowdhary maintains he did not see the stabbing and was walking behind Makki and Molnar when the stabbing took place.

In the documentary, Akoum says through tears: "I'm trying to be strong but he was my brother. All the details that they said and how he died and we weren't there for him and I'll never forgive myself that I couldn't be there. He died on his own miles away from where he comes from and we were thinking he was safe."

In May 2020, Makki’s mother, Debbie, died at the age of 55, less than a year after the death of her son. Per Manchester Evening News, she led a campaign against knife crime and, as her family said at the time, she “died of a broken heart.” In her absence, Makki’s sister, Jade Akoum, is now leading the fight for justice. Three years on from her brother’s death, she founded The Yousef Makki Foundation.

“Our aim is to raise an initial £10,000 in order to begin accepting grant applications from exceptional young people from underprivileged backgrounds who, with a little financial support, can excel in their educational endeavours, as Yousef Makki himself did,” reads the foundation’s website. Before his death, Makki was awarded a full bursary scholarship to attend one of Manchester’s top private schools, Manchester Grammar School.

More like this
A New Netflix Doc Will Explore The Unsolved Murder Of Jill Dando
By Sam Ramsden
This First Look At 'The Gold' Shows Jack Lowden In A Whole New Light
By El Hunt and Sam Ramsden
Michaela Coel Has Some *Thoughts* About The Nepo Baby Discourse
By Maxine Harrison
Rupert Grint Just Shared A *Major* Update About Ron Weasley’s Future
By El Hunt
Get The Very Best Of Bustle/UK
Sign up for Bustle UK's twice-weekly newsletter, featuring the latest must-watch TV, moving personal stories, and expert advice on the hottest viral buys.