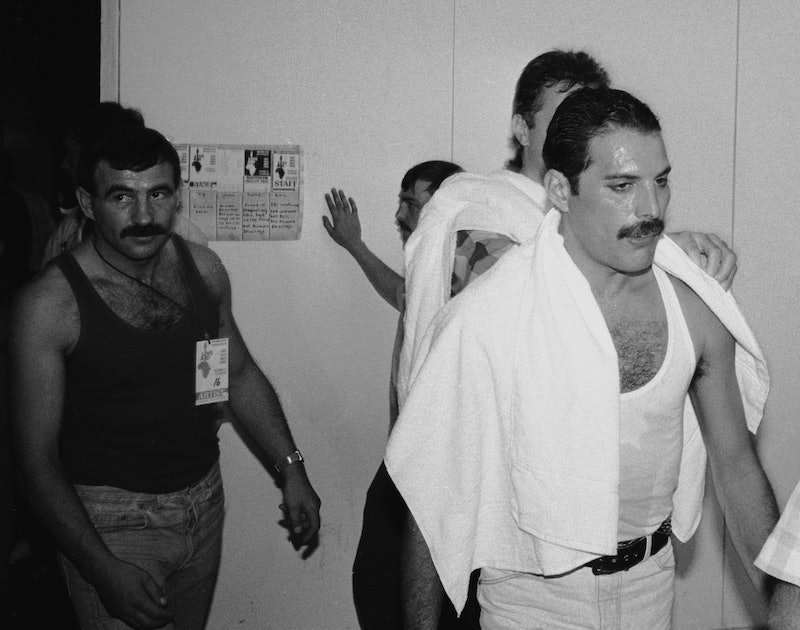 Freddie Mercury, the lead singer and main creative driving force behind the band Queen, was famous for his operatic voice and flamboyant stage presence. But offstage he was known to be a quiet and charming individual — and someone who didn’t discuss his bisexuality in public. From 1985 until his death in 1991, he lived a quiet life with his longtime partner, Jim Hutton (portrayed recently in Bohemian Rhapsody by Aaron McCusker). Some Queen fans thought the movie glossed over Mercury’s main relationships, both his first with Mary Austin and, especially, his second with Hutton — who only appears in a few brief scenes, but was in effect married to the pop star. So what happened to Jim Hutton in real life?

Unfortunately, Hutton is no longer with us. While Hutton, like Mercury, suffered from HIV, the disease was not his cause of death. (Mercury died due to complications from AIDS in 1991 at age 45.) Instead, it was lung cancer that took Hutton's life, and the Irish native died at the age of 60 on New Year's Day, 2010.

But before then, he shared a long and meaningful relationship with Mercury. Hutton first met the singer at a London gay club called Heaven in 1985. The Queen frontman approached him and offered to buy him a drink, but Hutton was already dating someone and said no. About 18 months later, they crossed paths again in a club, and this time the sparks flew. Thus began a lengthy relationship that would last for the rest of Mercury's life. (The movie shows the couple meeting under different circumstances, with Hutton meeting Mercury at work and telling him to come find him when he’s emotionally ready.)

The pair ended up living together for several years, starting just months after they began dating. As depicted in the film, Hutton attended the Live Aid concert in 1985 and said he was “gobsmacked” by Mercury’s performance.

Initially, the couple had moments of tension. “I saw him with another guy in Heaven and we had a huge row. He told me he did it to make me jealous,” Hutton said. “Then one day I saw him leaving his Kensington flat with another guy and we had an argument. I told him he had to make his mind up.” But ultimately they formed a true partnership. Mercury wasn’t out in public, nor did he speak about Hutton in interviews, but he didn’t hide the relationship either. And though they were never married (gay marriage was, of course, illegal at the time), they more or less acted as married couples do. Each wore a wedding ring to show how committed they were to one another, and Mercury referred to Hutton as his husband.

Also like married couples, their love lasted through difficult times. After Mercury was diagnosed with AIDS in 1987 (later than was depicted in the film), he reportedly told Hutton he would understand if he wanted to leave. "Don’t be stupid," Hutton said in response. "I’m not going anywhere. I’m here for the long haul." Hutton was himself diagnosed with HIV in 1990; he stayed by Mercury's side and helped care for him until the singer's death in 1991. He remembered, “It didn’t sink in until the last few weeks that he was actually dying.”

Their last conversation occurred a few days before he died, according to Hutton: “It was 6 a.m. He wanted to look at his paintings. ‘How am I going to get downstairs?’ he asked. ‘I’ll carry you,’ I said. But he made his own way, holding on to the banister. I kept in front to make sure he didn’t fall. I brought a chair to the door, sat him in it, and flicked on the spotlights, which lit each picture. He said, ‘Oh they’re wonderful’.”

Mercury bequeathed his house to his ex, Austin, after his death. Hutton said she kicked him out; he apparently received 500,000 pounds and relocated to their house in Ireland. Three years after Mercury's passing, Hutton published a book detailing his time with the singer, titled Mercury and Me. In his memoir, Hutton said he worked as Mercury’s gardener after moving into the singer’s Kensington mansion, and continued working as a hairdresser as well. He never fully embraced the rock and roll lifestyle, instead maintaining a relatively normal life with his famous live-in boyfriend.

Hutton's primary motivation for writing the book was therapeutic in nature. As he revealed in a 1994 interview with the British morning news program The Big Breakfast, he believed it helped him grieve his lover's death.

More like this
Everything You Need To Know About ‘Black Panther: Wakanda Forever’
By Bustle Editors
Christian Bale Sang With Taylor Swift & His Daughter Can't Believe It
By Radhika Menon
Snoop Dogg & Michelle Pfeiffer Lead Moving Tributes To Coolio
By El Hunt
Everything You Need To Know About The 'Knives Out' Sequel
By Bustle Editors
Get Even More From Bustle — Sign Up For The Newsletter

This article was originally published on Oct. 30, 2018