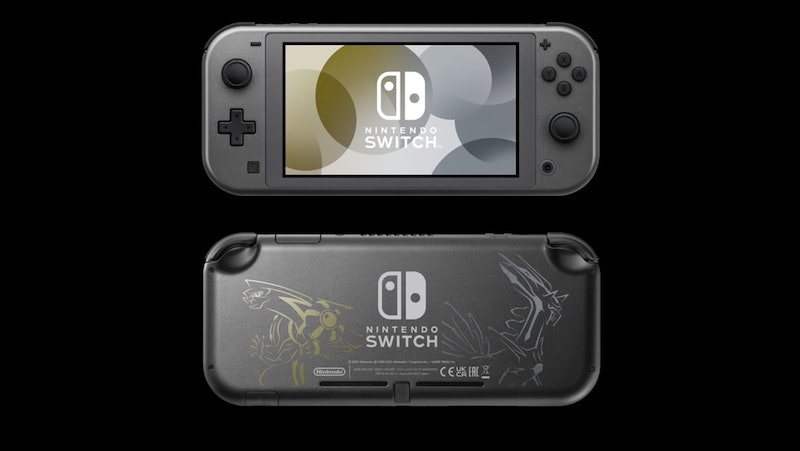 In 2007, one of Pokémon’s most celebrated releases hit the shelves. Pokémon Diamond and Pokémon Pearl have remained fan favourites since they debuted all those years ago, and now they’re set to be revamped – with a special edition Switch Lite made to mark the occasion.

Aptly renamed Brilliant Diamond and Shining Pearl, the games will see old and new features combined to create a brand new experience for players. Set for release on Nov. 19, 2021, the games will be accompanied by a Nintendo Switch Lite themed around the game’s legendary Pokémon, Dialga and Palkia.

In a matte onyx finish alongside a silver Dialga and gold Palkia design on the back, the design of special edition Switch Lite is a direct callback to Nintendo’s release of a similar DS Lite to celebrate the original Diamond and Pearl’s release. There are some slight difference – the DS Lite featured a gloss black finish, the Dialga and Palkia designs were on the front, and it also came with a carry case decorated with the same artwork – but the similarities are more than enough to spark feelings of nostalgia for erstwhile Pokémon trainers.

If you want to get your hands on the new Switch Lite, it will be available to purchase on Nov. 5 – two weeks before the release of the games Brilliant Diamond and Shining Pearl. You can currently pre-order the console via the Nintendo Store for £199.99. As with anything that taps into fond childhood memories, we think this one is going to sell out fast.

However, much like the Sword and Shield Switch Lite that came out in 2019, the console does not come bundled with Brilliant Diamond and Shining Pearl – you’ll have to purchase the games separately. They’re available for pre-order on the Nintendo Store, Nintendo eShop, Amazon, and Game, either in a dual pack for £99 or singularly for £49.99. They’re a little cheaper on Smyths Toys, with the dual pack listed at £89.99 and the single games at £44.99.

If you pre-order the single games through Nintendo or Smyths Toys, you’ll also receive an adorable figurine of Dialga or Palkia, depending on which version you choose; for avid collectors, it may be worth ordering the games individually to make sure you score both. After all, you gotta catch ‘em all.