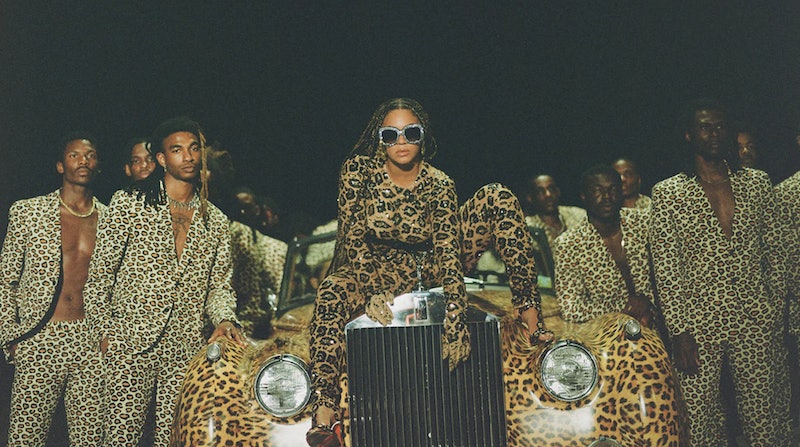 Beyoncé's Black is King, a film accompaniment to her album The Lion King: The Gift, hits Disney+ on July 31. And the artist wrote, directed, and executive produced the film with the mission of adapting The Lion King into a larger look at its African legacy and heritage. So given its African roots, many are wondering where was Black is King filmed?

Black is King shot practically all over the world. As Vogue details, "[the film] includes scenes filmed in the UK, the US, and yet-to-be-disclosed countries in both Southern and Western Africa." Also according to Vogue, "[Beyoncé] partnered with talent in each destination – casting local actors and dancers in many of the videos."

And some of the African artists that Beyoncé worked with have tweeted about their collaboration, sharing the blood, sweat, and tears that went into Black is King. On Twitter, director Joshua Kissi wrote, "I was tapped to contribute and direct the Ghana portion of the film. There was nothing like contributing to this vision through narratives on the ground in my home country. This wouldn't be possible without my on the ground Ghana team!" On Instagram, Nigerian design and creative art direction company Anti Design wrote, "Super pumped to have played our part on the Nigerian chapter of this film alongside amazing creatives."

Queen Bey also took to Instagram to share her enthusiasm for the visual album. In June she wrote, "[Black Is King] is a labor of love. It is my passion project that I have been filming, researching and editing day and night for the past year. I’ve given it my all and now it’s yours."

"With this visual album, I wanted to present elements of Black history and African tradition, with a modern twist and a universal message, and what it truly means to find your self-identity and build a legacy. I spent a lot of time exploring and absorbing the lessons of past generations and the rich history of different African customs," she continued.

And since Black is King was a truly global project, it will also be available to watch globally as well. As Pitchfork notes, "Disney recently announced a distribution deal that will make the film available to stream on much of the African Continent, including South Africa, Nigeria, Ghana, Ethiopia, Namibia, Cameroon, Liberia, Burundi, Senegal, Togo, and more." This way, the visual album made by the world can be seen by the world.

More like this
Here’s Everything Coming To & Leaving Netflix In February
By Jake Viswanath
Yes, You Can Stream ‘To Leslie’ In The UK Now
By Sam Ramsden
You’ll Definitely Recognise The Stars Of Amy Winehouse’s Biopic
By Maxine Harrison
Rihanna Shares Video Of 'Black Panther 2' Filmmakers' First Reaction To “Lift Me Up”
By Radhika Menon
Get Even More From Bustle — Sign Up For The Newsletter
From hair trends to relationship advice, our daily newsletter has everything you need to sound like a person who’s on TikTok, even if you aren’t.