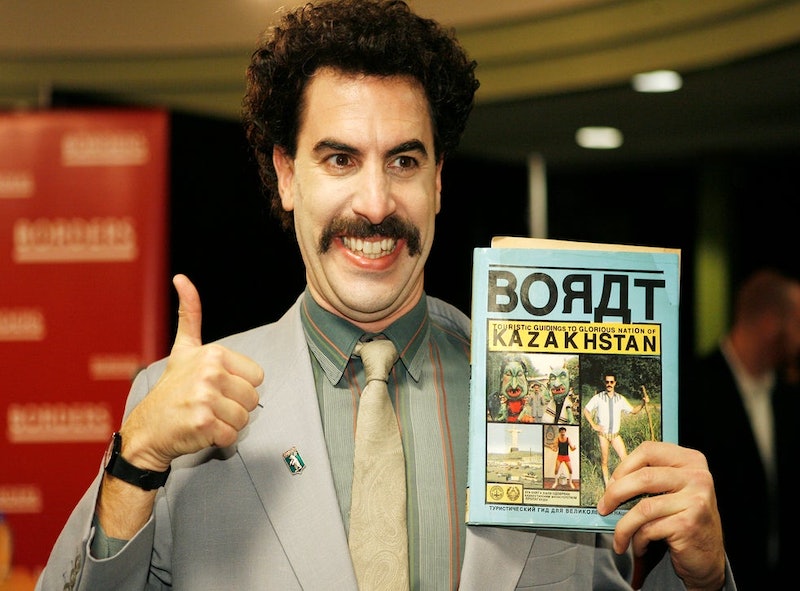 When Borat first hit theaters in 2006, audiences were aghast. Sacha Baron Cohen had created one of the most controversial, cult classic characters of all time. And with his hotly anticipated sequel — Borat Subsequent Moviefilm (out on Amazon now) — the comedian seems hellbent on topping his previous film. To do so, Baron Cohen traveled all across the country, inciting chaos wherever he went. Here's our rundown of where Borat Subsequent Moviefilm was filmed, which includes more than a few surprising backdrops.

The premise of the film sees Borat (Baron Cohen) returning to America in the aftermath of his first film, which has made him somewhat of a celebrity. In the trailer, Borat walks down the street in Los Angeles and shies away from Americans who all seem to be hellbent on snapping a photo with him. But the reason Borat's come back to face the music is to deliver his daughter — Sandra Jessica Parker Sagdiyev (Maria Bakalova) — as a "gift to someone close to the throne." Which the audience later learns means none other than Vice President Mike Pence.

In his quest to offer his daughter to Pence, Borat must travel across the country to find him. At one point, he dresses up as Donald Trump to sneak into the 2020 Conservative Political Action Conference in Maryland while Pence is giving a speech. Later on Baron Cohen was spotted — in a different disguise, obviously — in Olympia, Washington pranking a conservative rally into singing a song with wildly racist lyrics, according to The Olympian.

Throughout the film, Borat tours more of the American south, disrupting a few businesses along the way. Per the Greenville Post and Courier, the crew made a few stops in South Carolina, including a Halloween costume shop and a bakery. The bakery, according to the Post and Courier, served a cupcake topped with a plastic baby to Borat and his daughter, which sets up a later prank on the Carolina Pregnancy Center, an anti-choice nonprofit. According to the Atlanta Journal-Constitution, Baron Cohen also visited a Macon, Georgia cotillion, which briefly features in the trailer as well.

Recently, Baron Cohen pulled back the curtain a bit and spoke about his most grueling on-location shoot for the film. As Baron Cohen described it to The New York Times, "The hardest thing I had to do was, I lived in character for five days in this lockdown house. I was waking up, having breakfast, lunch, dinner, going to sleep as Borat when I lived in a house with these two conspiracy theorists. You can’t have a moment out of character."