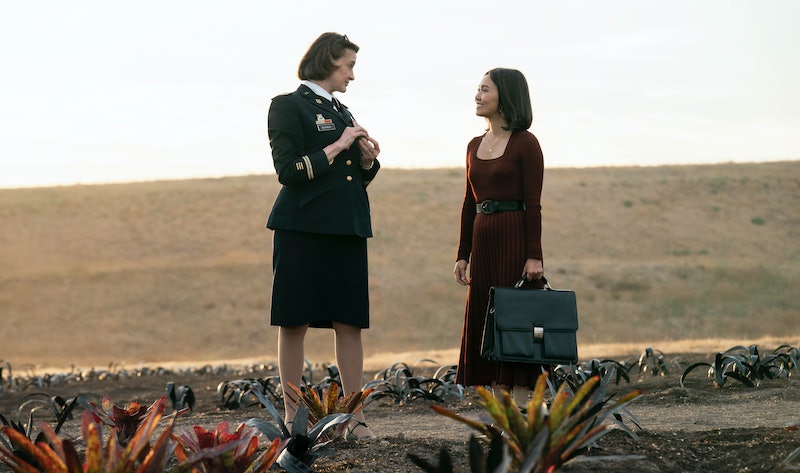 While Homecoming Season 1 was mainly set in Geist's Homecoming facility in Tampa, Florida, the Amazon Prime series widens its lens beyond Heidi Bergman's (Julia Roberts) cozy office and fish tank this season. So far, in fact, that the first scene of Season 2 depicts star Janelle Monáe as her character wakes up disoriented in a canoe floating on a lake. And while it's unclear where Homecoming Season 2 was filmed, we can make some guesses based on the show's 2018 shooting locations.

According to IMDb, Season 1 was filmed in Lake Arrowhead and on the Universal Studios lot — both in California. What's more, they built the Homecoming facility themselves, as Homecoming Season 1 director and executive producer Sam Esmail told Vulture. "All two stories, every room. It's not like a set where you walk around a corner and there's nothing there, or you open a door and that's the end of it," he explained back in 2018. "Because of the nature of the long tracking shots, [Season 1 production designer Anastasia White] had to build the detail into everything that we could see, which is essentially the entire set."

However, some things were filmed in real locations — like the Homecoming entrance and Thomas Carrasco's (Shea Whigham) office. "The lobby had to be real because Heidi would have to go in and out of the world through there," Esmail continued in the same interview. "For Carrasco's office, we got lucky and found a great location with high enough ceilings so that I could move the camera around as much as I wanted to. That was a real place, but we treated it basically like a set."

While Esmail didn't name the specific locations, Reddit user beedeeyes claims that the Homecoming lobby is actually Toyota's former headquarters in Torrance, California, which White confirms in an interview with Awards Circuit. "I only know this because I used to work in that building and had a major WOAH moment when watching," the Redditor wrote.

But the Homecoming world has expanded in Season 2, and there are several key outside scenes, such as the mysterious fields outside the Geist headquarters and the aforementioned canoe scene from Episode 1. "This season is much more expansive [than Season 1] in terms of locations," co-creator Micah Bloomberg said during the Winter TCA press tour, per Deadline. "We're not as contained in the facility." That said, Monáe told TheGrio that much of Season 2 was filmed on the Universal lot as well, so they were likely able to reuse the Season 1 set.

This time around, Nora Takacs Ekberg has taken over White's production design role, while Steve Woroniecki is credited as the location manager, taking over from Season 1's Michael Chickey. Other than that, however, there isn't any information about where Season 2 was shot. Perhaps there will be more information after this new installment drops on Friday, May 22.