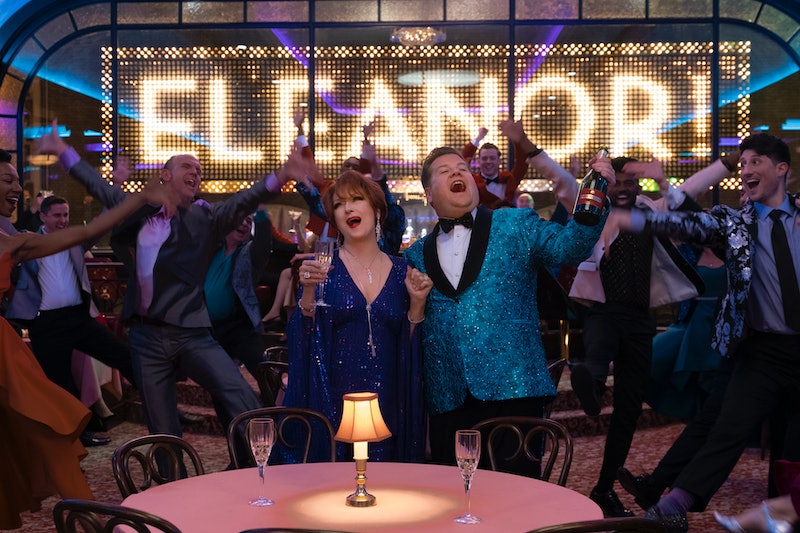 After dominating TV sets with his legions of campy and cult-favorite series, Ryan Murphy is back in the director's chair of a big-screen movie for the first time in a decade. The movie in question, The Prom, has everything Murphy fans would expect: an all-star cast, hammy performances, extravagant set pieces, and big musical numbers. But where The Prom was filmed is actually a bit of a surprise. The film follows a quartet of narcissistic Broadway stars who, in an attempt to gain some good PR, head to a small Indiana town to plan an elaborate evening for a teenage girl whose school banned from attending prom with her girlfriend.

The movie's Broadway scenes look legitimate, but no filming actually took place in New York City. Instead, this Hollywood flick was made the old-fashioned way in Los Angeles, partly at Raleigh Studios in Hollywood, according to The Hollywood Reporter. The large studio's soundstages certainly account for the majority of the film's interior shots, but what about the movie's exterior Broadway scenes? Prior to shifting the action to Indiana, The Prom features some extensive outdoor shots of New York's glittery theater district. As it turns out, those scenes were made with some good ol' Hollywood magic.

Murphy and his team actually assembled an identical Broadway clone in downtown Los Angeles after New York City refused to grant the director permits to film on the real Broadway. "We were promptly denied," the director said at a preview of the film, according to The New York Post. "We found a four-acre abandoned lot in downtown LA and we went to Broadway and we measured the curbs and the length of the curb to the street and how many bulbs are on the marquee. We spent six months building Broadway."

If Ryan Murphy put half as much effort into the story and performances of The Prom as he did the film's sets, then fans of the director should be in for a big treat when the movie hits Netflix on Dec. 4.

More like this
What’s New On Netflix: Ana De Armas’ 'Blonde' & A Nick Kroll Special
By Arya Roshanian
Here’s Everything Coming To & Leaving Netflix In October
By Jake Viswanath
What’s New On Netflix: Meet 'The Real Bling Ring'
By Arya Roshanian
Everything To Know About The Long-Awaited ‘Community’ Movie
By Stephanie Topacio Long
Get Even More From Bustle — Sign Up For The Newsletter