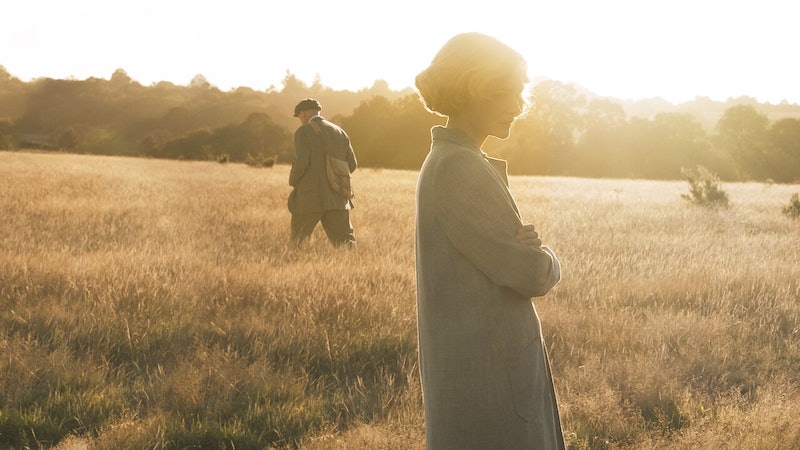 Carey Mulligan stars as Mrs Edith Pretty in newly released Netflix film The Dig, about a wealthy British widow who hires an archaeologist to dig up mysterious formations on her estate — naturally, they find something truly fascinating. Based on a true story, The Dig is set on the eve World War II, and as Netflix describes, the "historic discovery" echoes of Britain's past, "in the face of its uncertain future‎". The cinematic new film features some beautiful, vast country landscapes but where was The Dig filmed?

Much of The Dig was filmed in the Suffolk countryside — close to where the actual historical excavation took place more than 80 years ago. As it goes, an incredible Anglo-Saxon burial ship was discovered at Sutton Hoo in Suffolk, England in 1939. Self-taught archaeologist Basil Brown (played by Ralph Fiennes) worked to uncover it, sparking a team of archaeologists from the British Museum and Cambridge University to help uncover its incredible hidden treasures.

The treasures — which include a warrior's helmet, sword and gold jewellery — are now at the British Museum, while the site of the 86ft oak ship is owned by the National Trust.

The emotional period film, also starring Lily James, has been well-received by members of the Suffolk community who praise it for its retelling of the county's famous stories.

“It is one of the greatest Suffolk stories that there is. The film is fantastic. From the opening scene it is Suffolk," said Jim Horsfield, business development manager at Suffolk Screen, the county’s official film office.

“We have visited Sutton Hoo quite a few times because it is such a fantastic place to visit, but it really made that story come alive and it is just great to think that is going to happen for so many people, and that people are going to be able to access that and see where it all happened. If you are from Suffolk, the landscapes make you feel like you are going home.”

The Dig is adapted from author and journalist John Preston's novel of the same name.

More like this
Yes, 'The Price Of Glee' Is Available To Watch In The UK
By Catharina Cheung
Gerard Butler Insisted On Adding This Pivotal Scene To 'Plane'
By Catharina Cheung
You’ll Definitely Recognise Isadóra Bjarkardóttir Barney’s Mum
By Maxine Harrison
New Details About Jeremy Renner's Snowplow Accident Reveal The Actor's Intentions
By Sam Ramsden
Get The Very Best Of Bustle/UK
Sign up for Bustle UK's twice-weekly newsletter, featuring the latest must-watch TV, moving personal stories, and expert advice on the hottest viral buys.