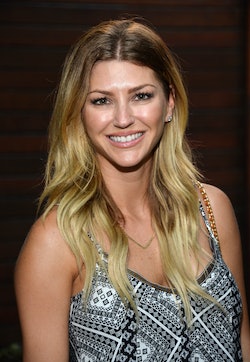 AshLee Frazier's Bachelor Nation run never really went her way. She was eliminated from Sean Lowe's Bachelor season right after Fantasy Suites and then had a disastrous stint on the first season of Bachelor in Paradise, where she got caught bashing Clare Crawley and ended up losing the respect of the guy she was interested in. But years after Sean's Bachelor season, AshLee Frazier's life has never looked better.

After appearing on The Bachelor, AshLee gave a couple of Bachelor Nation relationships a shot, though none of them ultimately worked out. In April 2013, shortly after Sean's season finale, she dated famously indecisive former Bachelor Brad Womack. After they broke up, she started dating Michael Garofola from Desiree Hartsock's Bachelorette season in October 2013. They didn't work out either, and her 2014 BiP stint also didn't yield a lasting love.

In November 2016, four years after competing for and losing out on Sean's engagement ring, AshLee got her own ring. According to People magazine, she got engaged to Aaron Williams after 11 months of dating but 10 years of friendship before that. In a statement to People, she called Aaron her best friend. "We got engaged on the top of the Brooklyn bridge," she added. "Very romantic. New York will have a little extra special place in my heart."

After a four-month engagement, AshLee and Aaron tied the knot in March 2017. They had an outdoor wedding in Texas, according to Us Weekly, with a couple of Bachelor Nation members as guests, including Elise Mosca from Juan Pablo Galavis' Bachelor season and Erica Rose from Lorenzo Borghese's Bachelor season. The happy news continued into 2018, when the newlyweds gave birth to their daughter Navy Lee Williams that September.

AshLee told E! News that there was a lot of significance behind Navy's name. "Her name came from my dad, Bruce Lee. When I was adopted my parents changed my name from Ashley to AshLee. It was important to them to make sure I felt as part of the family," AshLee said. "Aaron and I wanted to continue that tradition."

Now their daughter is almost 2, and AshLee and Aaron are excitedly looking ahead to the birth of their second child. AshLee announced the news on Instagram in April. "Navy has something she wants to tell you. She’s going to be a big sister. We are overjoyed," AshLee wrote. She said she was four months pregnant, which means her baby is likely due around September 2020, the same time of year that Navy was born.

AshLee's story is proof to all the Bachelor contestants who didn't get the final rose that sometimes life works out better without it.

More like this
Yes, That's Christina From 'The Bachelor' In Taylor Swift's "Fifteen" Music Video
By Brad Witter
Twitter Thinks This Is The Real Reason Zach Sent Christina Home On 'The Bachelor'
By Grace Wehniainen
This 'Bachelor' Contestant Had The Best Reaction To Wearing The Same Dress As Another Woman
By Grace Wehniainen
A Guide To All Of Zach Shallcross' 'Bachelor' Filming Locations
By Brad Witter
Get Even More From Bustle — Sign Up For The Newsletter
From hair trends to relationship advice, our daily newsletter has everything you need to sound like a person who’s on TikTok, even if you aren’t.