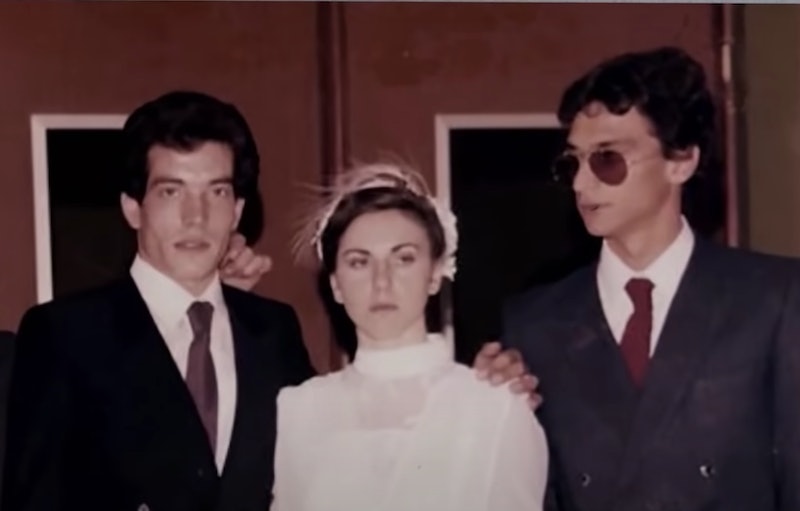 Of all the crime bosses in Netflix's World's Most Wanted, Matteo Messina Denaro is possibly the most mysterious. A godfather of the Cosa Nostra gang, Denaro is known as "Diabolik," one of the last remaining fugitive Sicilian mob bosses. He's wanted for drug trafficking, extortion, murder, and most notably was convicted in absentia in 2002 for a gruesome string of attacks that terrorized Italy. Nonetheless, Denario has continued to evade capture and has now been on the run for nearly three decades.

According to the German broadcaster Deutsche Welle, Denaro was born into a well-known mafia family in the Sicilian province of Trapani. In his youth, he acted as an executioner for the mafia, repeatedly boasting that he could "fill a cemetery" with his victims. He eventually became a crime lord who was known for being an atypical Cosa Nostra mobster. Italian state prosecutor Teresa Principato told The Globe and Mail that instead of living like a "classic mafioso ... in the country eating his ricotta cheese and apple," Denaro was a notorious womanizer who loved traveling and openly flaunting his wealth — things that went against the conservative Sicilian gang values.

Despite living such a flashy lifestyle and being tied to a laundry list of crimes, Denaro was an intelligent criminal who never got caught; his "Diabolik" nickname derived from an Italian comic book villain who always escaped. And despite his brutality and ties to terrorist bombings, Denaro saw himself more as a "philosopher [and] folk hero," according to The Globe and Mail.

"Do you want to know what best sums up Matteo Messina Denaro?" one anti-mafia investigator told The Guardian. "It is the letter he wrote to a fellow godfather where he talks about the police and claims, 'These demented Torquemadas will never stop me.' The point is, the man believes he is in the right. He believes he is not a criminal."

But according to captured witnesses — who have traded evidence in exchange for lighter sentences – Denaro's crimes are numerous. They claim that he murdered a rival boss and a hotel manager who complained after he slept with the hotel receptionist. He allegedly masterminded the bombing of the Uffizi Gallery in Florence in 1993, as well as kidnapped and murdered the 11-year-old son of a rival mafioso. In all, Denaro is wanted for over 50 murders.

Per The Guardian, Denaro has been on the run since June 1993. Though there are a few people willing to testify against him, he's left almost no trail to follow. He's notorious for not using any computers or cell phones, and he would often communicate with associates by leaving coded messages on little pieces of paper. To this day, there are virtually no photos of him; the only image police have to go off of is a VFX composite of the now nearly 60-year-old man. Though most of his associates and family members have been arrested since 2009 — with his sister arrested in late 2013 — Denaro remains at large.

There are rumors that he got facial reconstruction surgery and is somewhere out there maintaining his luxurious lifestyle, bankrolled by corrupt politicians and businessmen. Per The Guardian, investigators have long claimed that Denaro is being shielded by the powerful Freemasons in Trapani, but to this day no one can absolutely confirm his whereabouts.

Regardless, prosecutors are still determined to apprehend him. As Principato explained to Globe and Mail, "We hear he is living like a parasite off other people's money. All of his family is incarcerated, sister, cousins, in-laws – more than 100 relatives and people who were close to him."