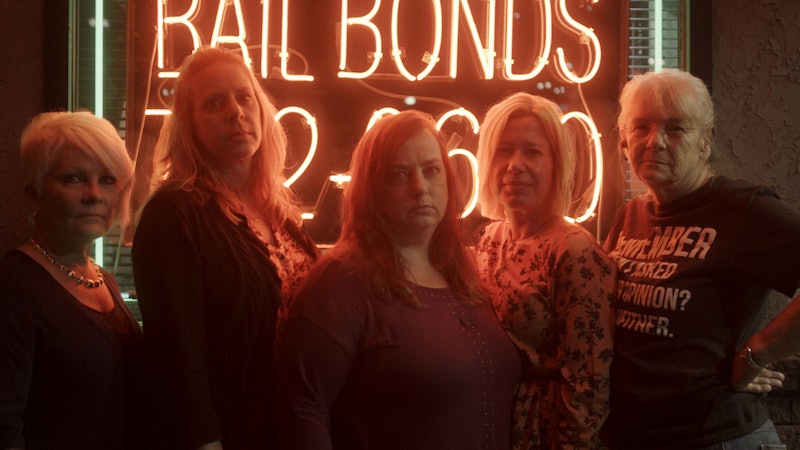 Dating apps can be a boon for older singles, but they can also lead to catfishing — an experience that the subjects of Showtime's new docuseries Love Fraud know all too well. The women in the show all got entangled with a man named Richard Scott Smith, a classic con artist who deceived, manipulated, and stole from his dates before disappearing. It wasn't until his exes started a website detailing his transgressions that authorities began to pin down where Richard Scott Smith is and exactly how far his web of deceit goes.

Directors Heidi Ewing and Rachel Grady lay out Smith's modus operandi throughout the four-part series. Smith created dating app profiles under various fake names and with different backstories, changing his interests to whatever meshed with his date. He always appeared to be the perfect doting, fun, and affectionate boyfriend and often confessed his love quickly — two or three weeks in — then pushed for a wedding and a joint savings account. Soon after, he'd drain the woman's life savings and split without a word, leaving them in even more dire financial straits than when they first met him. Love Fraud surmises he scammed at least 10 women using this exact method.

“He tells great stories,” Jean Hansen, one of Smith’s many former wives, told The Kansas City Star. “It’s part of his charm ... [but] every word out of his mouth is a lie."

After Smith disappeared, the women all tried to contact the police and charge Smith with identity theft and fraud, but they were rarely taken seriously. With no one and nowhere to turn to, Lisa Lenton, another of his former wives, started the "Scott the Crook Smith" blog to warn other women. His other dates found the site and began chiming in, alleging everything from forgery and fraud to assault and bigamy. Soon, the website became a dossier for his many offenses. One day, the women hoped, it would help to get him arrested.

Lately it seems that Smith's crimes have caught up to him. According to court documents obtained by the Daily Mail, Smith was arrested in September 2015 for domestic abuse, but was later given probation. Then in February 2017, several of his victims filed felony charges of identity theft and forgery. The charges alleged that Smith used a woman's name and personal information to fill out a credit application and then forged her signature. In August 2017, Smith pled guilty to identity theft in the Johnson County Kansas District court, but was released after posting a $10,000 bond. According to Lenton's blog, Smith failed to show up to his probation revocation hearing in April 2018.

It's unclear where Smith is today, and he's yet to really answer for his crimes. But his many victims are hoping that Love Fraud changes that. “We think that maybe after this [series] airs, there’s going to be other women coming forward who were married to him or have stories about him,” Heidi Ewing said after Love Fraud premiered at the Sundance Film Festival in January. "There isn’t any press on it now,” she said, but with enough media attention, perhaps Smith will finally be brought to justice.