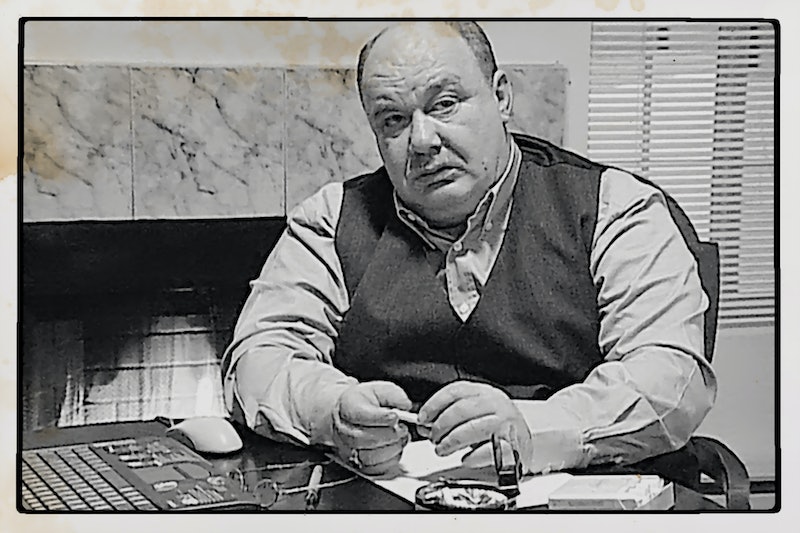 He may not be as immediately familiar as households names like Al Capone, Frank Costello, and Carlo Gambino, but in the world of crime, Semion Mogilevich looms just as large.The World's Most Wanted subject, who has denied multiple claims of money laundering, drug trafficking, tax fraud, weapons stockpiling, and funding terrorism, is still being chased by the FBI, Interpol, and Israeli intelligence today.

In a 1998 feature, The Village Voice described Mogilevich "the world's most dangerous gangster." Known as "Brainy Don" because of his economics degree, he gained infamy as the leader of the Red Mafia, a brutal Russian mob family that grew into a global crime cartel. The FBI claims Mogilevich has operated under eight aliases, while Russian authorities say he has 17 different names.

The details surrounding Mogilevich's early life are murky. According to The Village Voice, he was born in Ukraine and eventually became a member of the Liubertskaya crime group. Soviet Union authorities became aware of him in the 1970s, after he'd been involved in petty thefts and counterfeiting. By the 1980s, he was defrauding Jewish refugees by promising to exchange their priceless goods for land, only to run away with the profits. In the 1990s, he became an Israeli citizen and married a Hungarian woman. He formed significant political ties in Israel, and built a 250 member criminal organization — headquartered in prostitution clubs and full of educated associates — in Budapest. He also basically bought up the entire Hungarian arms industry, and by 1994 became a legitimate weapons manufacturer that even showcased at a U.S. gun convention.

Per a 1999 New York Times article, after the Soviet Union fell and its military forces withdrew, generals alleged that they sold their weapons to Mogilevich, who in turn sold them, at much higher prices, to countries like Iraq, Iran, and Serbia. A 1995 British intelligence report estimated that he was worth $100 million, and he was further accused of orchestrating a $150 million money laundering and racketeering scheme in the United States through a Philadelphia-based magnet company.

Authorities have struggled to actually pin all these crimes on Mogilevich, however, as his empire has thrived on politicians who looked the other way — all while likely getting paid under the table. "In Europe and Russia, the corruption of police and public officials has been part of the Semion Mogilevich Organization’s modus operandi," stated a classified FBI document acquired by The Village Voice.

In response, Mogilevich told The New York Times that "all accusations of 'laundering,' controlling the drug trade, prostitution and contract murders is nothing but the raving of the F.B.I., which is trying to obtain more money from Congress to fight the 'Russian mafia.'"

Mogilevich was arrested in Moscow on Jan. 24, 2008 for suspected tax evasion under a cosmetics company, but he was released on July 24, 2009.

As Business Insider reported in 2014, Mogilevich is now openly living in Russia and has largely stayed out of the public eye. The Eurasia Daily Monitor reported in 1999 that he has close ties with Vladimir Putin. The U.S. does not have an extradition treaty with Russia, so as long as he remains in the country, Mogilevich may avoid prosecution forever.

More like this
The Dog & His Handler In 'Gunther’s Millions' Are Worth, Well, Millions
By Gretchen Smail
Ashton Kutcher Wants Danny Masterson “To Be Found Innocent” In Rape Retrial
By Jake Viswanath
'The Queen’s Gambit' Season 2 Tweet Wasn’t From Anya Taylor-Joy
By Mary Kate McGrath, Jack Irvin and Grace Wehniainen
Netflix Shut Down 'Bridgerton' S3 Rumours About A “Very Dark” Storyline
By Bustle
Get Even More From Bustle — Sign Up For The Newsletter
From hair trends to relationship advice, our daily newsletter has everything you need to sound like a person who’s on TikTok, even if you aren’t.