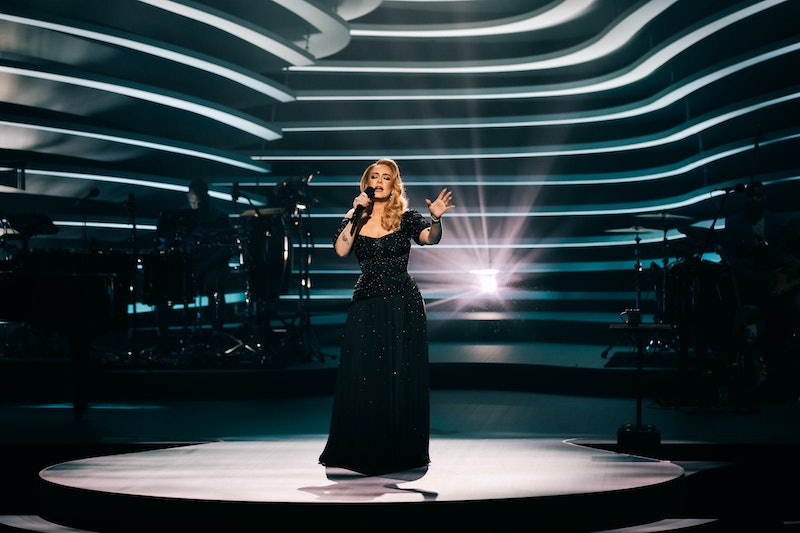 Following her headline-making performance at Los Angeles’ Griffith Park Observatory, Adele returned home to wow audiences once again in support of her fourth studio album, 30. This time, taking part in a British telly tradition: An Audience With. First broadcast in 1980, the long-running entertainment show has seen the likes of Elton John, the Spice Girls, Rod Stewart, Kylie Minogue, and Celine Dion host and perform some of their most famous hits to a star-studded audience.

Hosted at the London Palladium, Adele’s audience was buzzing with friends, family, and a selection of famous faces. Among them were It’s A Sin star Ollie Alexander, Doctor Foster’s Suranne Jones, Jonathan Ross and his daughter Honey, Andrew Lloyd Webber and his wife, Madeleine Gurdon, and Boy George. Plus, there was Hollywood royalty, including Samuel L. Jackson and Bryan Cranston.

Inside the Palladium, the cameras panned across the floor of the venue where Philip Schofield could be seen enjoying the show beside Schitt’s Creek star Catherine O’Hara and Danny Elfman. “That’s it then,” the self-confessed mega-fan of Schitt’s Creek wrote on Instagram. “Life is complete!”

Some of Adele’s closest friends like Alan Carr and Stormzy were also there, and they got the opportunity to ask the singer questions throughout the show. As amazing as the conversations were between Adele and celebs like French, Jackson, Southgate, Idris Elba, and Hannah Waddingham, it was Emma Thompson who stole the show.

Not only was Thompson living her best life throughout the gig, but she got the opportunity to give Adele the ultimate surprise. The actor asked the singer if there was a particular person who encouraged and inspired her growing up, leading Adele to recall her English teacher, Miss McDonald. “She left when I was in Year 8,” Adele explained. “She really got me into literature. … She was so bloody cool, so engaging, and she really made us care and we knew that she cared about us.”

As it turned out, Miss McDonald was actually in the audience. As she made her way to the stage, Adele broke down in tears. “I didn’t know you were coming!” the singer exclaimed, to which McDonald replied, “That’s OK, it was supposed to be a surprise!”

Following their heartwarming reunion, a tearful Adele exclaimed that she needed to get her makeup redone. So, of course, she called upon one of her closest mates. “Alan, do you want to come up and talk for five minutes while I fix my face? For real,” she said as she egged him on to sing a rendition of “Make You Feel My Love” in the meantime.

“This goes out to all the lovers,” Carr said, before leading the audience into a singalong. “Now that’s a true friend,” Adele said as she came back on stage. It couldn’t get any more British than that.

More like this
Michaela Coel Has Some *Thoughts* About The Nepo Baby Discourse
By Maxine Harrison
Turns Out George Clooney Is A Huge Fan Of This Classic British Game Show
By El Hunt
Twitter Is Saying The Same Thing About Beyoncé's Renaissance World Tour
By Shahed Ezaydi
You’ll Definitely Recognise Isadóra Bjarkardóttir Barney’s Mum
By Maxine Harrison
Get The Very Best Of Bustle/UK
Sign up for Bustle UK's twice-weekly newsletter, featuring the latest must-watch TV, moving personal stories, and expert advice on the hottest viral buys.