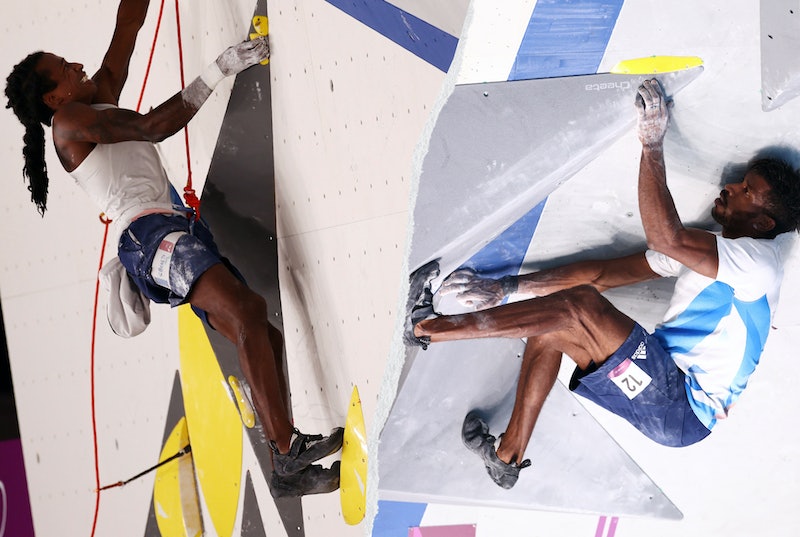 For many competing Olympians, athleticism appears to run in the family. At this year’s Tokyo Olympics in particular, there are apparently eight sets of twins competing, including Team GB boxers Pat and Luke McCormack and British gymnasts Jennifer and Jessica Gadirova. For brothers and pro-climbers Mickaël and Bassa Mawem, journeying to Tokyo 2021 together to compete for the French team, taking the two available spots, was always the plan.

It’s been a rocky journey for the climbers (excuse the pun) as they compete across three disciplines, speed, bouldering and lead. Despite impressive results during Speed and Bouldering events for both brothers, ranking 1 and 3 as of August 3, Bassa Mawam suffered a climbing injury just ahead of the finals and could be forced to pull out. However younger brother Mickaël Mawam — currently top of the leaderboard — will compete in the men’s final this Thursday.

Here’s what you need to know about the Mawem brothers.

Who Are The Mawem Brothers?

French brothers Bassa and Mickaël Mawem have been climbing since their teens. Bassa, the oldest of the two, is 36-years-old, started climbing through a school programme when he was 15, and younger brother Mickaël, 31, followed in his footsteps six months later.

“We did some silly things at some points, like every kid, but climbing was always here to reframe us, to show us the right way,” Bassa told the Olympic website.

Bassa, the oldest competitor, is a speed specialist, while Mickaël excels at bouldering events, and the brothers are considered “late-bloomers” to their Olympic dreams.

“A lot of people ask why we are still around. We saw some athletes stop earlier, because it’s tough to hold on for so many years,” they told the official Olympics site in April 2020, “But we started later and we’re still here.”

While they both had their eyes on gold medals at the tournament, ahead of the Olympics, they confirmed that there’s “no competition between us.”

“I want to see my brother win and he wants to see me win. If both of us win, fantastic. But If only one of us wins, both of us have won,” Mickaël. And from the looks of it, a win could be on its way home for them both.

What Medals Have The Mawem Brothers Won?

Ahead of the Olympics, both brothers were national champions and record holders and were the ones to watch when climbing officially became an Olympic event in 2016.

Mickaël qualified for the French Olympic team first, finishing 7th at the 2019 Climbing World Cup in August and Bassa qualified through the Olympic Qualifier Tournament in Tournefeuille, France, in late November.

The brothers have well over 100K followers on their shared Instagram page (@lesfreresmawemofficiel) and love sharing updates from their Tokyo 2021 journey (including the tiny shared bathrooms).