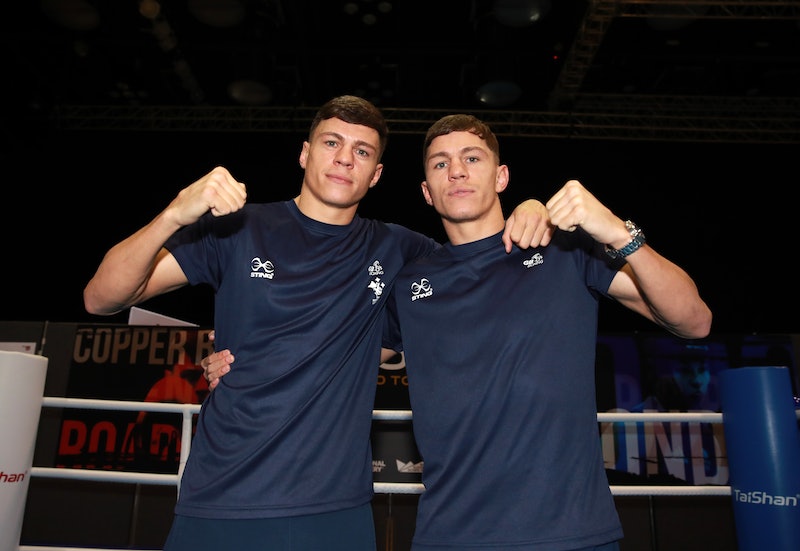 Qualifying for Team GB’s boxing team on June 1, 2021, Pat and Luke McCormack became one of eight sets of twins competing at the Olympics this year. On Aug. 3, Pat earned Team GB a silver medal in the men’s Welterweight final against Cuba’s Roniel Iglesias. This marked Pat’s second Olympic Games, following his performance at Rio in 2016.

Luke made his Olympic debut this year, but was defeated by Cuban two-time world champion Andy Cruz in the last-16 of the men’s lightweight tournament on July 31. Despite the loss, Luke is determined to take this Olympic experience in stride. “That’s my last amateur fight there. I’m ready to go professional now,” he told the Sunderland Echo. “I waited a little bit too long to turn turnover because of the lockdown and that but now I’m ready to get the big bucks.”

Here’s all you need to know about Pat and Luke McCormack.

Who Are Pat And Luke McCormack?

Pat and Luke McCormack are 26-year-old twin boxers from Sunderland. They both trained and honed their craft at Birtley amateur boxing gym, a 25-minute drive away from their home city. While it’s unclear exactly when the duo started boxing, they’ve been under the watchful eye of Birtley’s head coach, Graeme Rutherford, since they were 11-years-old.

“They’ve had some good times and some bad times. They have worked really hard to get where they have got,” Rutherford told the Northern Echo. “They are not mega-talented or anything like that – their success is down to pure hard work. It doesn’t matter how good you are. If you don’t put the hard work in.”

When it comes to fighting each other, things tend to “get out of hand” according to Luke. “If we’re playing a game against each other there’s a high level of competition. We’re not really allowed to spar much because it gets out of hand,” he explained to the Sun. “It always did when we were younger.”

However, he added: “When it comes to boxing, there’s no rivalry. I want to see him win and he wants to see me win.”

What Medals Have Pat And Luke McCormack Won?

Pat has earned eight medals since debuting at the 2011 AIBA World Junior Championships in 2011. He won gold at that event and has since gone on to win gold at the 2014 and 2015 England Boxing National Elite Championships, as well as the Gold Coast 2018 Commonwealth Games.

Luke has won four awards since debuting at the 2013 Bradenburg Cup, where he won gold. He went on to win silver at the 2013 European Junior Championships and another gold at the 2015 England Boxing Elite National Championships. Like Pat, he competed at the Gold Coast 2018 Commonwealth Games, earning a bronze medal.