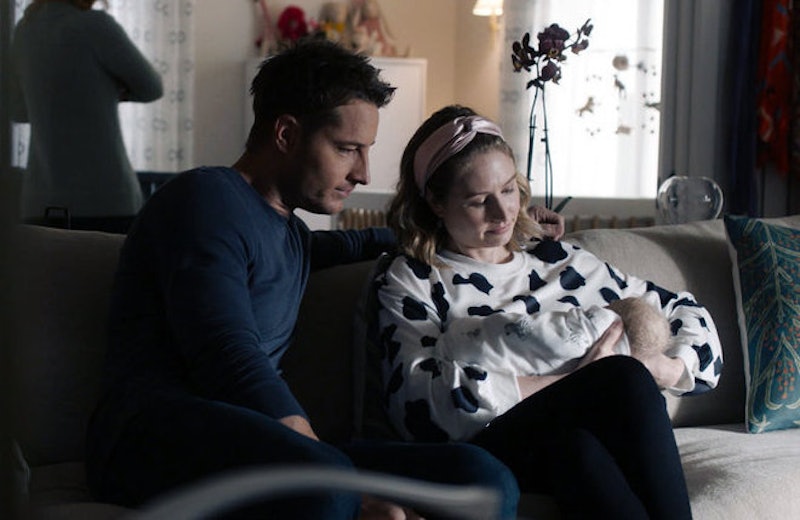 Spoilers for This Is Us Season 5, Episode 12. Just as Kevin and Madison were hitting a high in their relationship, This Is Us threw Sophie back into the equation. Actually, make that all of Kevin’s exes. At the end of the April 6 episode, Zoe, Cassidy, and Sophie were all shown reading the Us Weekly article about Kevin and Madison’s engagement. But while Zoe and Cassidy both smiled, seemingly happy for their former flame, Sophie’s smile turned into a disappointed look the more she read. Don’t read into it too much, though: this doesn’t necessarily mean Sophie will come back into Kevin’s life.

In an interview with Entertainment Weekly, This Is Us’ co-executive producer Julia Brownell challenged Kevin and Sophie shippers to think about why they’re so stuck on the two as endgame rather than Kevin and Madison. “He has this childhood love for Sophie, but does that work today? Just because you were in love with someone at 10, does that mean that applies to you when you're 40?” she asked.

Brownell added that the writers have been trying to show Madison as a great fit for Kevin in recent episodes — particularly through the scene in which Madison convinces a paparazzi photographer to leave them and their new babies alone. “Kevin really sees Madison and all she has to offer, that she can be there for him in the way that he’s there for her, and that he sort of has everything he's been looking for,” Brownell said. “Why does he keep questioning it? So maybe we're asking the same thing of the audience. Like, why do you want Sophie so badly? Look at how great Madison is! She gave him two babies and helped save him from the paparazzi!”

Star Justin Hartley has also said he thinks Madison and Kevin have the potential to become the great love story his character has always wanted. “I think sometimes the nontraditional and the unexpected relationships develop out of something that you in a million years would never guess ... the next thing you know you have a kind of perfect relationship that is so strange when on paper. But it works in reality,” he told Glamour in March, after Madison revealed to Kevin that she was pregnant. “You also have a man who wants to have children, who was never taken seriously, who now has the means to support all of them,” Hartley continued. “He’s a year sober. He’s found himself ... And you have this woman who never thought she would have kids and resigned herself to it. Then she ends up pregnant with twins. That is kind of a miracle. Miracles will make you rethink things.”

Even if the writers wanted to bring Sophie and Kevin back together in the end, it would be tricky. Alexandra Breckenridge is now the star of Netflix’s Virgin River, which was recently picked up for a third season. “I can’t do two shows at once, unfortunately,” she told Huffington Post in December, adding that she was released from her This Is Us contract when the writers decided that Kevin would pursue other romances. “That’s a bittersweet situation,” she said. “[This Is Us] is such a lovely environment to work in.”

The tiny cameo she made in the April 6 episode was probably as much as Breckenridge could squeeze in, which means that Madison will likely remain Kevin’s focus for now. Of course, it’s This Is Us, and things could always change in the future. Some fans have theorized that Kevin and Sophie will reconnect during a flash-forward to Rebecca’s funeral, much like how the duo met up for Sophie’s mother’s funeral in Season 4, Episode 12. “I’ll see you next time someone dies,” Kevin joked at the time.

In the meantime, Kevin and Madison are forging ahead with their wedding plans. Whatever regrets Sophie may have about her relationship with Kevin, that chapter appears closed for now.

More like this
Wait, Is Barney Stinson Related To Sophie On 'HIMYF'?
By Gretchen Smail
Madison From 'The Bachelor' Chronicled Her Life As A "Sister-Mom" On Social Media
By Grace Wehniainen
Melanie Lynskey Plays A “Ruthless Leader” In 'The Last Of Us'
By Brad Witter
Pedro Pascal Barely Got Through The "Lisa From Temecula" 'SNL' Sketch
By Stephanie Topacio Long
Get Even More From Bustle — Sign Up For The Newsletter
From hair trends to relationship advice, our daily newsletter has everything you need to sound like a person who’s on TikTok, even if you aren’t.